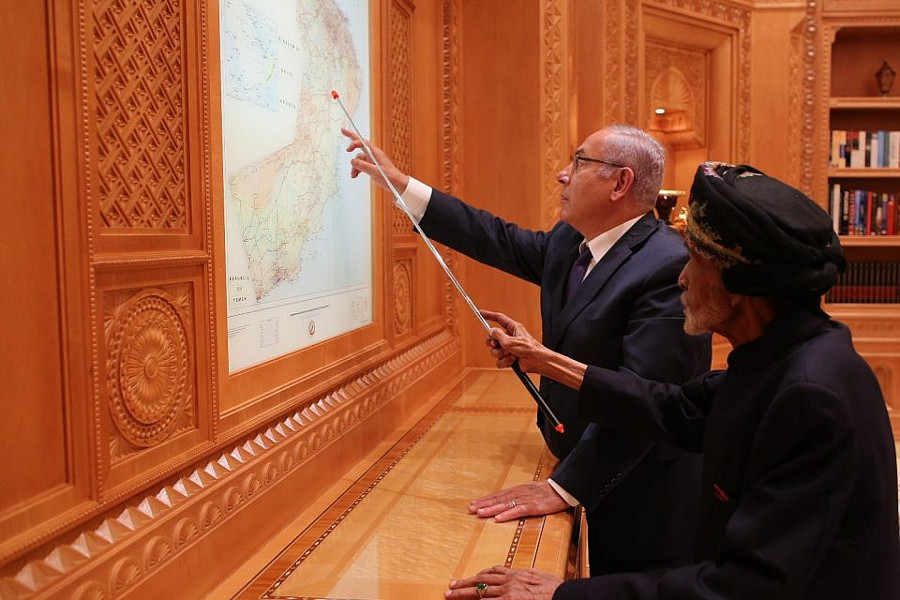 Oman’s government described Israel as an accepted Middle East state on Saturday, a day after hosting a surprise visit by its prime minister that Washington said could help regional peace efforts.

Oman is offering ideas to help Israel and the Palestinians to come together but is not acting as mediator, Yousuf bin Alawi bin Abdullah, the sultanate’s minister responsible for foreign affairs, told a security forum in Bahrain.

“Israel is a state present in the region, and we all understand this,” bin Alawi said.

“The world is also aware of this fact. Maybe it is time for Israel to be treated the same [as others states] and also bear the same obligations.”

Both leaders met with Oman’s Sultan Qaboos bin Said, 77, who rose to power after overthrowing his father in 1970.

Netanyahu was accompanied by senior officials, including the head of the Mossad intelligence agency and his national security adviser.

“We are not saying that the road is now easy and paved with flowers, but our priority is to put an end to the conflict and move to a new world,” bin Alawi told the forum.

However, a Western diplomatic source told Middle East Eye that the sultan’s surprise meeting with Netanyahu was more about Oman’s desire to play a role in the region than reaching a peace deal between Israelis and Palestinians.

“Oman is trying to play a regional role between the various parties and axes in the region, and it sees Israel as an important player in various regional issues,” the diplomat told MEE on condition of anonymity.

“Abbas’s visit was for creating the necessary balance,” the diplomat said.

The sultan reportedly told both Netanyahu and Abbas to restart peace talks, but Palestinians told him there isn’t a good chance negotiations can resume with Israel’s current right-wing government.

“The Palestinian side welcomes any Arab or international effort to revive the peace process, but does not think that Oman has a magic wand capable of doing what the Americans and the others could not do,” a Palestinian source said.

The peace process, the source continued, has been “crushed under the bulldozers and the non-stop expansion of Israeli settlements”.

‘Deal of the century’

Oman is relying on the US and efforts by President Donald Trump in working towards the “deal of the century,” bin Alawi told the forum on Saturday.

Although still not officially unveiled, Abbas has derided the deal as “the slap of the century,” and has said he will not commit “treason” by agreeing to it.

According to Palestinian officials, they are likely to be offered provisional borders over fragments of land comprising about half the occupied territories, or just 11 percent of what was recognised as Palestine under the British mandate.

The Palestinian areas would be demilitarised, and Israel would have control over the borders and airspace.

Israel and the Palestinians would then be left to “negotiate” over the status of Israel’s illegal settlements in the West Bank and East Jerusalem, with Trump likely to back Netanyahu to the hilt, according to analysts.

US Defence Secretary Jim Mattis and his counterparts in Italy and Germany also participated, but Jordan’s King Abdullah cancelled his appearance after a flood that hit the Dead Sea region killed 21 people, including more than a dozen children.

“This is a helpful step for our peace efforts & essential to create an atmosphere of stability, security & prosperity between Israelis, Palestinians & their neighbors. Looking forward to seeing more meetings like this!” Greenblatt said.

Israel and some Gulf states share an interest in curbing Iran’s influence in the region.

Oman has long been to the Middle East what neutral Switzerland is to global diplomacy.

The country helped to mediate secret US-Iran talks in 2013 that led to the historic nuclear deal signed in Geneva two years later.

He told Israel’s parliament last week that due to fears of a nuclear threat from Iran, “Israel and other Arab countries are closer than they ever were before”.

Though such trips are uncommon, Israeli leaders have previously visited the Gulf state.

In 1996, the late Shimon Peres went to Oman and Qatar when he was prime minister and opened Israel trade representative offices in both Gulf countries.

His predecessor, the late Yitzhak Rabin, made the first such trip to Oman in 1994.