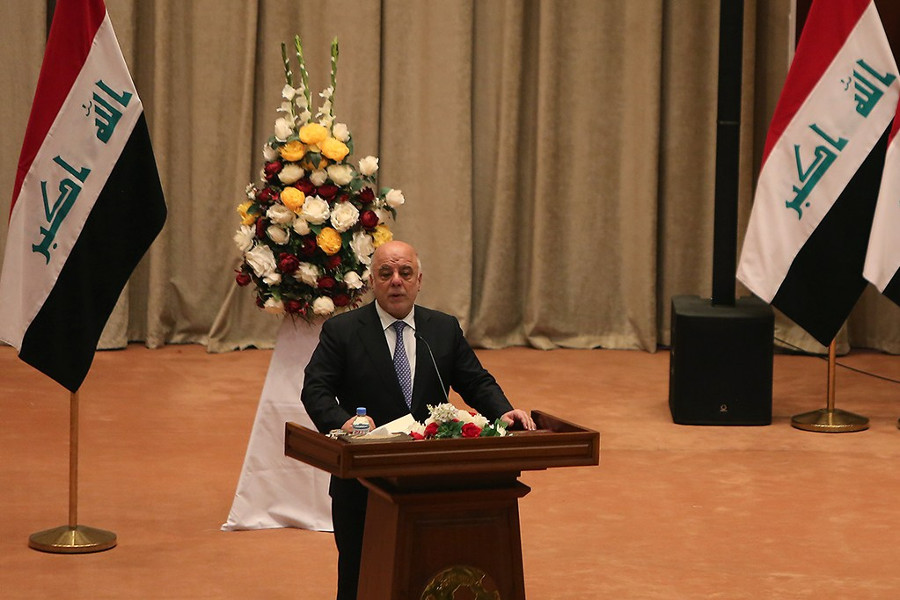 Iraqi Prime Minister Haider al-Abadi speaks during a parliament meeting in the capital Baghdad on September 3, 2018. Iraq's parliament convened today with a populist cleric who triumphed in May elections allying with Abadi to try to form a government and sideline pro-Iran rivals. / AFP PHOTO / SABAH ARAR

The two largest electoral blocs in Iraq called on Prime Minister Haider al-Abadi to resign Saturday after parliament held an emergency session to discuss the unrest in Basra that has killed at least 12 people during several days of protest over poor public services, unemployment and corruption.

“We demand the government apologize to the people and resign immediately,” Hassan al-Aqouli, secretary-general of the Sairoon Coalition, said following the session. The coalition is composed of the Conquest Coalition and Sairoon, the winner of Iraq’s recent parliamentary elections.

Al-Abadi acknowledged the unrest that has gripped Basra but defended his record in parliament. He described the unrest as “political sabotage” and asserted the crisis over public services was being exploited for political gain.

The French news agency AFP said the protests this week were sparked by the hospitalization of 30,000 people who had drunk polluted water in Basra.

The unrest has prompted the Iraqi Interior Ministry to impose a curfew in Basra.

An official at Basra’s airport said three Katyusha rockets struck the perimeter of the airport Saturday morning, but no injuries were reported. There was no immediate claim of responsibility for the attack, which did not stop planes from taking off or landing.

On Friday, hundreds of protesters in Basra stormed the Iranian consulate in that city and set fire to it, chanting, “Iran out, Iran out, free Iraq, free Iraq.”

Iraqi Foreign Ministry spokesman Ahmed Mahjoub said, “The targeting of diplomatic missions is unacceptable and detrimental to the interests of Iraq.”

Various sources said many residents of the predominantly Shiite city had accused political parties backed by Iran of interfering in Iraqi politics.

Arab media reported that Iran had closed its Shalamja border crossing with Iraq after the attack on its consulate and had urged its citizens to leave Basra immediately.

The head of Basra security, General Jamil al Shammari, said his men had been trying not to attack protesters, but that it was imperative to protect strategic government installations.

Shammari said the protests had not been peaceful and had been infiltrated by groups trying to cause violence. He said his men had been stunned by protesters throwing grenades, setting fire to army vehicles and government buildings, and trying to assassinate people.