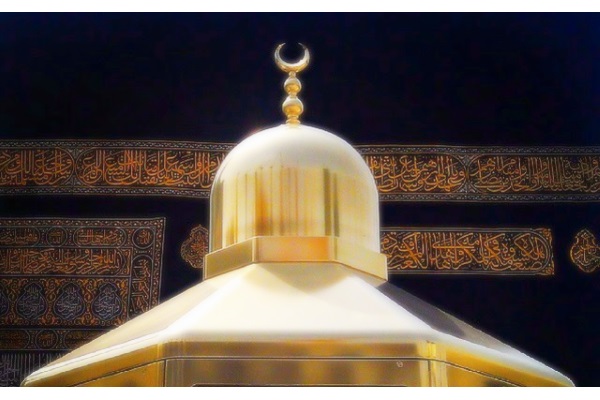 It had been close to ten years since Abraham (ﷺ) had left his wife and baby in Mecca in the care of God.  After a two-month journey, he was surprised to find Mecca a lot different than how he had left it.  The joy of reunion was soon interrupted by a vision which was to be the ultimate test of his faith.  God commanded Abraham (ﷺ) through a dream to sacrifice his son, the son he had had after years of prayers and had just met after a decade of separation.

Similarly, in the biblical verse Genesis 17:19, Abraham (ﷺ) was promised:

“Your wife Sarah shall bear you a son whose name shall be Isaac.  I will establish my covenant with him as an everlasting covenant [and] with his seed after him.”

Because God promised to give Sarah a child from Abraham (ﷺ) and grandchildren from that child, it is neither logically nor practically possible for God to command Abraham (ﷺ) to sacrifice Isaac, since God neither breaks his promise, nor is He the “author of confusion.”

Although Isaac’s name is explicitly mention as the one who was to be sacrificed in Genesis 22:2, we learn from other Biblical contexts that it is clear interpolation, and the one to be slaughtered was Ishmael.

In the verses of Genesis 22, God commands Abraham (ﷺ) to sacrifice his only son.  As all scholars of Islam, Judaism and Christianity agree, Ishmael was born before Isaac.  From this, it would not be fit to call Isaac the only son of Abraham (ﷺ).

It is true that Judeo-Christian scholars often argue that since Ishmael was born to a concubine, he is not a legitimate son.  However, we have already mentioned earlier that according to Judaism itself, the gifting of concubines from barren wives to their husbands in order to produce offspring was a common, valid and acceptable occurrence, and the child produced by the concubine would be claimed by the wife of the father[1], enjoying all rights as her, the wife’s, own child, including inheritance.  Furthermore, they would receive a double the share of other children, even if they were “hated”[2].

In addition to this, it is inferred in the Bible that Sarah herself would regard a child born to Hagar as a rightful heir.  Knowing that Abraham (ﷺ) had been promised that his seed would fill the land between the Nile and the Euphrates (Genesis 15:18) from his own body (Genesis 15:4), she offered Hagar to Abraham (ﷺ) in order that she be the means to fulfill this prophecy.  She said,

“Behold now, the Lord hath restrained me from bearing: I pray thee, go in unto my maid; it may be that I may obtain children by her.” (Genesis 16:2)

This is also similar to Leah and Rachel, the wives of Jacob son of Isaac, giving their maids to Jacob to produce offspring (Genesis 30:3, 6. 7, 9-13).  Their children were Dan, Nepthali, Gad and Asher, who were from the twelve sons of Jacob, the fathers of the twelve tribes of Israelites, and therefore valid heirs[3].

From this, we understand that Sarah believed that a child born to Hagar would be a fulfillment of the prophecy given to Abraham (ﷺ), and be as if he was born to her own self.  Thus, according to this fact alone, Ishmael is not illegitimate, but a rightful heir.

God Himself regards Ishmael as a valid heir, for, in numerous places, the Bible mentions that Ishmael is a “seed” of Abraham (ﷺ).  For example, in Genesis 21:13:

“And also of the son of the bondwoman will I make a nation, because he is thy seed.

There are many other reasons which prove that it was Ishmael and not Isaac who was to be sacrificed, and God willing, a separate article will be dedicated to this issue.

To continue with the account, Abraham (ﷺ) consulted his son to see if he understood what he was commanded by God,

“So We gave him the good news of a forbearing son.  And when (his son) was old enough to help in his daily affairs, (Abraham) said: O my dear son, I have seen in a dream that I must sacrifice you.  So look, what think you?  He said: O my father!  Do that which you are commanded.  God willing, you shall find me of the patient.” (Quran 37:101-102)

Indeed if a person was told by their father that they were to be killed due to a dream, it would not be taken in the best of manners.  One may doubt the dream as well as the sanity of the person, but Ishmael knew the station of his father.  The pious son of a pious father was committed to submit to God.  Abraham (ﷺ) took his son to the place where he was to be sacrificed and laid him face down.  For this reason, God has described them in the most beautiful of words, painting a picture of the essence of submission; one which brings tears to the eyes:

“And when they both submitted (to the command of God), and he (Abraham (ﷺ)) laid him (Ishmael) face down upon his forehead (in order to be sacrificed).” (Quran 37:103)

Just as Abraham (ﷺ)’s knife was poised to descend, a voice stopped him

Indeed, it was the greatest test of all, the sacrificing of his only child, one born to him after he had reached an old age and years of longing for progeny.  Here, Abraham (ﷺ) showed his willingness to sacrifice all his belongings for God, and for this reason, he was designated a leader of all humanity, one whom God blessed with a progeny of Prophets.

“And when his God tested Abraham (ﷺ) with various commands, and he proved true to each one.” He (God) said, indeed I have made you a leader of humanity.  He (Abraham (ﷺ)) said (requesting of God), ‘and from my progeny.” (Quran 2:124)

Ishmael was ransomed with a ram,

It is this epitome of submission and trust in God which hundreds of millions of Muslims reenact every year during the days of Hajj, a day called Yawm-un-Nahr – The Day of Sacrifice, or Eid-ul-Adhaa – or the Celebration of Sacrifice.