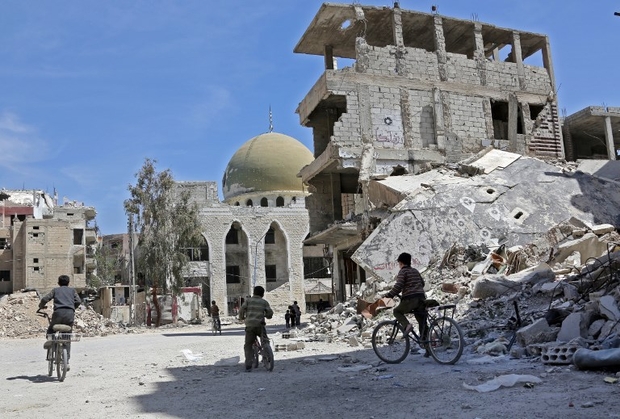 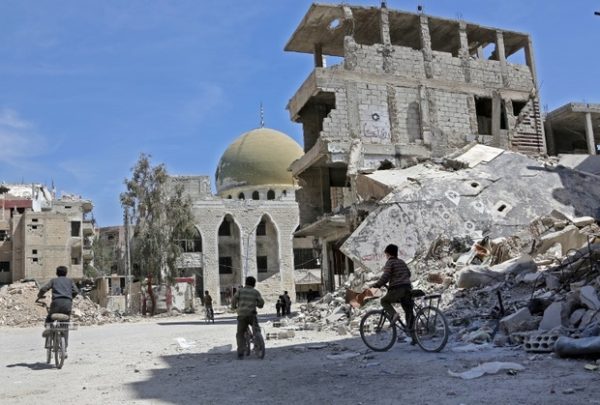 Rebel-controlled Deraa in the south of Syria has been part of a de-escalation deal for almost a year. In the last week, however, the Syrian air force has dropped leaflets on the area’s residents that read: “The men of the Syrian army are coming. Take your decision before it is too late.”

After finally crushing the last opposition – including Isis – in Damascus’ suburbs last month, after years of fighting, Syria’s president, Bashar al-Assad, is looking to reassert the government’s control over the south of the country.

But his tired and overstretched army can’t do it alone.

The help of Iranian forces and Iran-backed militias, such as neighbouring Lebanon’s Hezbollah, have been key in helping the regime retake cities such as Aleppo and the rebel enclave of Eastern Ghouta in Damascus. Russian air power has also helped turn the tide of the war in Mr Assad’s favour.

After seven years of conflict, Syria is now more or less comprised of five different zones of influence.

The government has regained control of most of the major cities and the country’s main highway. The east of the country is held by mainly Kurdish forces, backed by the US. Turkey now calls the shots in much of northern Syria after pushing further across the border to Afrin in January, and nearby Idlib is controlled by opposition groups – among them Hayat Tahrir al-Sham, newly designated a terrorist group by the US.

In the southwest, US-supported Southern Front rebels maintain amicable relationships on the borders with Jordan and the Israeli-occupied Golan Heights.

It is this ill-fitting jigsaw of world and regional powers entrenched or otherwise invested in Syria’s future that will determine the next chapter of the war.

This week reports have surfaced that Russia has reached an unprecedented deal with Israeli prime minister Benjamin Netanyahu’s government: it seems Moscow has agreed to keep Iranian-backed forces out of the fighting for Deraa, creating a 19-mile buffer zone on the border.

Damascus and Moscow’s patience is being increasingly tried by Israeli missiles inside Syria targeting Iranian and Hezbollah infrastructure.

The removal of foreign forces fighting in Syria – of all stripes – is also a key issue for the remnants of the Syrian opposition, which told The Independent this week it is an escalating priority.

“Without Iran’s backing the regime could never hang on to the territory it has. There can be no diplomatic solution or settlement while thousands of foreign fighters are in Syria committing crimes and enflaming sectarian tensions,” said Nasr al-Hariri, the chief negotiator for the umbrella opposition group the Syrian National Council.

Despite the rumoured news from the south, however, it is unlikely Iran will be easily dislodged from the country.

“Iranian influence in loyalist Syria will simply not be contained by 10 or even 30 kilometre buffers. It has economic, cultural, political, and military dimensions.

The Syrian government and its allies have also taken advantage of the fact that the official Geneva peace process has proved unworkable for years and under the presidency of Donald Trump, the US’s objectives in Syria are now much less clear.

The Kurds in the northeast are wary of their American allies, but have been forced increasingly to turn towards them since Russia gave tacit approval for Turkey’s invasion of Kurdish-held Afrin in January.

In an interview this week with RT, formerly known as Russia Today, President Assad threatened to attack the areas east of the Euphrates river held by the US-backed Kurdish-Arab Syrian Democratic Forces (SDF), and said the presence of US forces – an estimated 5,000 military advisers – would not be tolerated there.

President Trump has said on more than one occasion he wants to pull US troops – and funding – from the country. But also this week, reports emerged that Washington and Ankara had cut a deal in which the US-backed SDF will cede the town of Manbij to Turkey in order to avoid triggering a wider escalation.

A direct attack from the Syrian side is not likely, said Aron Lund, a fellow at the Century Foundation think tank.

“I think the more important part of [President Assad’s] statement is when he says the Americans are going to leave, that some time, somehow, they will leave. That’s probably his conviction and it is also probably true.

“He’s saying that all areas of Syria should come back under central government control, which was always the official line, and he’s saying the Syrian Democratic Forces can either strike a deal and come back willingly, or they will be brought back by force.

“As long as the United States remains in those areas and has a deconfliction agreement with the Russians, there are hard limits to what Assad can do to retake them.”

Despite the fact the war has entered a new and bloody chapter this year, the deals cut between Russia, Israel, the US and Turkey have bought Syria one of its quietest weeks in years. Battle lines, red lines and polices are being redrawn before new rounds of violence kick off.

All the while, a diplomatic solution seems further and further away.

“Syria is not a local issue anymore. It is a regional and world issue,” said Nasr al-Hariri.

“The on-the-ground fighting will just cycle round and round. Syria deserves better.”