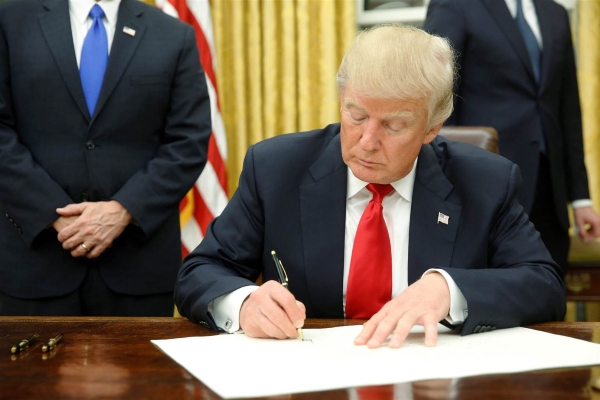 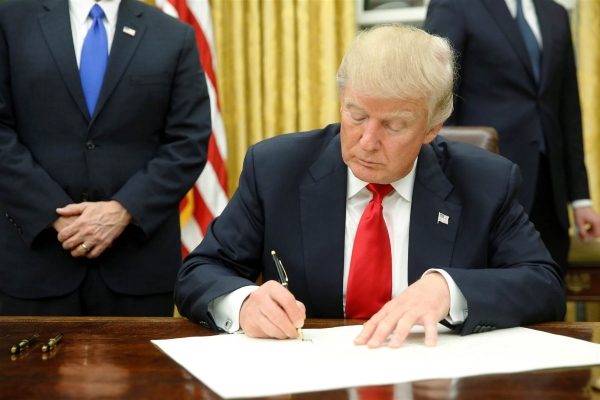 WHITE HOUSE — U.S. President Donald Trump on Tuesday formally renounced the multinational nuclear agreement with Iran, decrying it as “a horrible one-sided deal that should have never, ever been made.”

Trump, in remarks from the White House Diplomatic Room, declared that the United States is immediately reinstating all Iran-related sanctions it waived as part of the Joint Comprehensive Plan of Agreement (JCPOA).

Trump then signed a memorandum ordering U.S. agencies to reinstitute all nuclear sanctions on Iran that were waived by Trump’s predecessor, Barack Obama.

The 2015 pact was struck between Iran and the five permanent members of the U.N. Security Council — the United States, Russia, China, Britain and France — and Germany. The deal aimed to prevent Iran from obtaining nuclear weapons in exchange for sanctions relief.

The president asserted that “it is clear to me that we cannot prevent an Iran nuclear bomb” under the pact, adding “the United States will withdraw from the Iran nuclear deal” because “America will not be held hostage to nuclear blackmail.”

Trump’s decision to withdraw from the agreement comes despite pleas from several of America’s closest allies in Europe not to imperil the pact. Trump and hard-liners close to the president, such as Secretary of State Mike Pompeo and National Security Adviser John Bolton, have been fierce advocates for scrapping it.

Israel, believed to be the only country in the Middle East with a nuclear arsenal, has also backed Trump’s rhetoric on the JCPOA.

“Israel has opposed the nuclear deal from the start because we said that rather than blocking Iran’s path to a bomb, the deal actually paves Iran’s path to an entire arsenal of nuclear bombs,” Israeli Prime Minister Benjamin Netanyahu said after Trump’s announcement. “The deal didn’t push war further away, it actually brought it closer. The deal didn’t reduce Iran’s aggression, it dramatically increased it.”

“I have ordered the foreign ministry to negotiate with the European countries, China and Russia in coming weeks,” Rouhani said in a televised speech following Trump’s announcement. “If at the end of this short period we conclude that we can fully benefit from the JCPOA with the cooperation of all countries, the deal would remain.”

“I believe that the decision to put the JCPOA at risk without any Iranian violation of the deal is a serious mistake,” he cautioned in a statement.

Trump’s move allows him to claim he has accomplished one of his major 2016 election campaign promises — removing the United States from the pact he repeatedly deemed “the worst deal ever.”

“People will make this all about Trump, but it is not,” James Carafano, vice president for the Heritage Foundation’s national security and foreign policy institute, told VOA. “The deal was not sustainable over time. No one was happy with it, not even the Iranians, who expected big benefits that never materialized. Trump did the equivalent of a mercy killing.”

Proponents of the JCPOA accuse Trump of misrepresenting the agreement’s clauses, contending it has successfully frozen Iran’s nuclear weapons development. They also said the deal’s demise could prompt a nuclear arms race in the region.

Trump’s announcement was made as he prepares to meet — possibly in about a month — North Korea’s leader, Kim Jong Un, to discuss a possible denuclearization agreement.

In a tweet, Jon Wolfsthal, a former top arms control official at the National Security Council during the Obama administration, and currently a nonresident scholar on nuclear policy at the Carnegie Endowment for International Peace, predicted the collapse of the JCPOA would help North Korea.

“Trump will be desperate for a nuclear win. Content of the agreement doesn’t matter — it’s about the headline,” Wolfsthal tweeted. “North Korea is going to take Trump to the cleaners. Trump will claim success. We lose.”

Carafano counters, stating that North Korea “will get the message, too. Trump won’t sign up for a weak deal.”