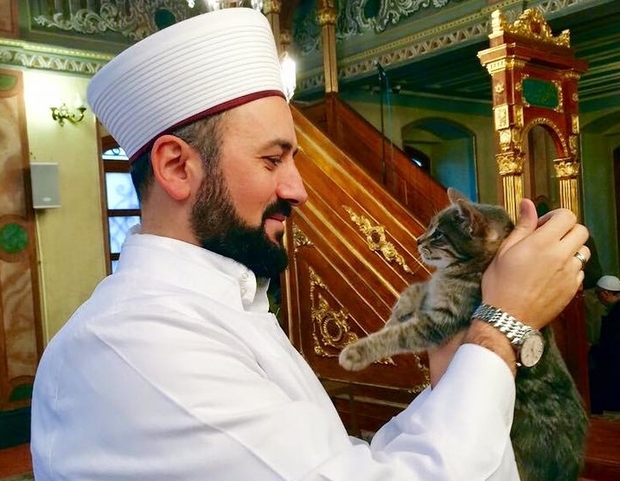 ISTANBUL, Turkey – Images and a video of an Imam in Istanbul opening the doors of his mosque to a neighbourhood cat and her litter of kittens when a cold spell hit the city took social media by storm recently.

But for anyone familiar with Istanbul, the love and reverence shown towards cats by this city’s inhabitants does not come as a surprise.

If a contest were to be held deciding on the cat capital of the world, Istanbul could certainly be a prime contender for the crown. There is scarcely an alley or street corner without a few cats and almost all of them are well looked after.

Religion, culture and practicality lie behind this long-running love affair between Istanbul’s residents and its cats.

Mustafa Efe, the imam pictured in the photographs that went viral, finds it surprising that the photos grabbed so much attention, and says what he did was something any Muslim is obliged to do.

“Our belief is all about compassion and mercy. This applies to animals as well,” Efe tells Middle East Eye. “Our religion tells us to be compassionate toward everything on earth, even things we perceive as dangerous such as snakes; so providing shelter to cats doesn’t even compare.”

“Cats are not considered unclean (Nejis) in Islam so letting them stay in the mosque itself is not an issue at all,” he added.

Stories about the Prophet Mohammed’s affinity for cats no doubt also play a role in the elevated status cats enjoy in this mostly Muslim-populated city. One such story cites how the prophet cut off the sleeve of his robe rather than disturb a sleeping cat and another speaks of how a cat saved the prophet from being bitten by a snake.

It is not just devout Muslims in Istanbul’s mosques who treat cats like royalty. Cats often reign supreme in places anywhere from hipster cafes to posh neighbourhoods to working-class areas.

There are plenty of small coffee shops and tea houses all over the city with their own resident cats that can sometimes be found occupying the best seats in the house. Customers and owners alike would not even dream of disturbing them. They just find someplace else to sit.

“It is only them that get served in this place,” says Gulsun Sozeri, pointing toward three or four cats lounging about. She works at a small self-service cafe in one of the more trendy neighbourhoods in the Asian side of the city.

“We only have a few tables and chairs. Sometimes the cats take up one or two of the tables receiving the most sunlight,” Sozeri tells MEE. “No one minds. Neither the customers nor we would try to shift them. They just belong here.”

Sozeri says although the cafe has lost a few potential customers who are allergic to cats, it has in return also gained many more due to their very presence.

“When the cats are in a playful mood they provide a lot of entertainment to patrons,” she says. “After seeing them, cat lovers are often tempted to drop in even if they didn’t plan to.”

It is of little surprise that the fattest and plumpest cats are to be found in the vicinity of fish restaurants and butcher shops, but it is almost impossible to come across an undernourished cat anywhere in the city.

When it comes to the city’s stray dogs it is an entirely different picture. While loved by many, they don’t even come close to enjoying the elevated status that cats enjoy. And they are often the targets of short-term draconian measures dreamt up by municipal and other officials.

Suleyman Akif, a part-time volunteer at an animal shelter in Istanbul, says it is this affinity for cats amongst the populace that means there are very few cats that need to be cared for at their shelter.

He says one of the reasons behind this could also be that dogs are much more difficult to care for.

“People get dogs as pets upon the insistence of their kids without realising how much work it takes to look after them. Cats pretty much take care of themselves and don’t need that much attention,” says Akif to MEE. “It is then that you see the cruel side of people who often just release the dogs onto the streets when caring for them proves too much of a hassle for them.”

According to Akif, another reason for fewer cats in shelters is that cats are less likely to get struck by vehicles and thus be unable to care for themselves.

“I don’t know if they are just smarter or what but there are a lot more cases of dogs being hit by cars.”

Testimony to the affection Istanbul residents feel towards animals – and cats in particular – is that no elected official would ever think of attempting to launch a drive to rid the city of its street animals, as it could be detrimental if those officials were to have any plans to stand for re-election.

One such nationwide attempt in 2012, targeted at stray dogs in particular, resulted in massive protests that led officials to quickly backtrack on their idea.

Estimates on the number of stray dogs in Istanbul vary, with most being in the range of 100,000 to 150,000. However, a way to manage the large population of strays is also a pressing issue of concern for authorities. Of particular worriment is the possibility of many of the strays having rabies. The method currently being tried to tackle this problem is to first spay or neuter the dog, treat the animal, ear-tag it and then release it back into the original neighbourhood.

Another more controversial measure that occasionally emerges and always results in an outcry is the gathering up of these dogs and releasing them in the uninhabited forests north of the city.

For centuries Istanbul had been a bustling port city whose ensuing trade brought untold riches to this vibrant city. But the holds of the ships arriving from all corners of the world also carried a deadly menace along with their precious cargoes: rats.

Rats were carriers of diseases, notably the plague. Yet cats were the best weapon to fight them. This alone played a large role in forming the close bond between Istanbul’s cats and the city’s inhabitants that lasts to this day.

Cats are so popular in Istanbul that plenty of videos and even documentaries are made about them.

‘Come, come whoever you are’

Efe says the pictures that created such a storm on social media recently were actually taken last winter and were not posted in any attempt to change opinions, but he welcomes any effect it might have in changing prevailing false perceptions regarding Muslims. The cats still reside in the mosque.

“Muslims have been portrayed negatively for years, and they are often stereotyped as bad and barbaric people in movies, television and everywhere. To such an extent that these pictures came as a surprise,” says Efe.

He adds: “There is nothing special about me caring for animals. Not even one member of our congregation batted an eyelid in surprise when they saw the cats in the mosque. Compassion for all living beings lies at the core of our belief.”

Efe says the famous exhortation of Sufi saint Mawlana Jalal-ad Din Rumi of “come, come whoever you are” is a perfect example of compassionately opening one’s arms to all. He also believes that this invitation is to all living beings, including plants.

Built in 1594, the Aziz Mahmud Hudayi Mosque is where Efe presides as imam. But the community outreach does not stop there. The mosque also includes a soup kitchen in its compound to feed the poor and needy.

“Our doors are open to everyone. We feed all the hungry. From the homeless, to refugees to anyone. This also extends to animals. We will not kick out any living creature that comes through our doors,” says Efe.