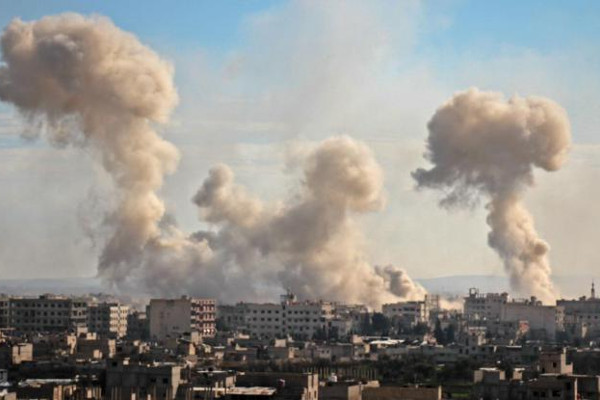 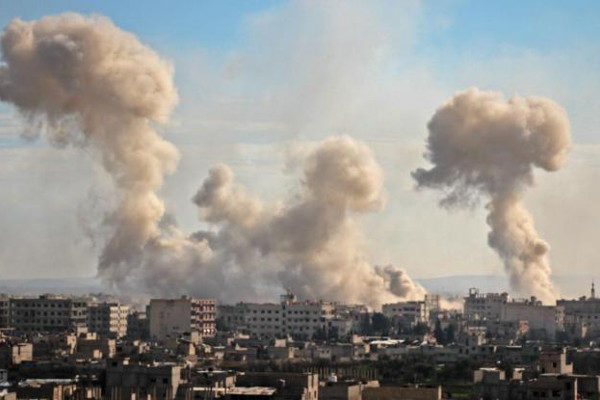 At least 11 people were left struggling to breathe on Saturday after air strikes on Syria’s rebel town of Douma, the Syrian Observatory for Human Rights monitoring group said, as rescuers alleged that toxic gases were used.

Government forces had resumed a military blitz of Douma on Friday after an apparent breakdown in negotiations between government backer Moscow and Jaish al-Islam, the rebels who hold the town. The renewed bombing killed eight people on Saturday, the monitor said, the day after negotiations collapsed. The monitor said it could not confirm whether the strikes were carried out by Syrian government warplanes or those of its ally, Russia.

On Saturday, the monitor said air strikes on the northern edges of the town had left 11 people, including five children, “suffocating and suffering shortness of breath.”

The monitor told AFP it could not specify the reason for the symptoms, but the White Helmets rescue forces said Douma had been hit with toxic gas.

The Syrian American Medical Society (SAMS) said that medical staff they supported inside Douma had reported chlorine use.

“I spoke to one of the doctors inside the town, who told me… they received a number of wounded with symptoms from chlorine gas,” said SAMS advocacy director Mohammad Katoub, who is based in Turkey.

For a week the bombardment had subsided as Moscow pursued peace talks with Jaish al-Islam, but talks came to an abrupt halt and air strikes suddenly resumed on Friday afternoon, killing dozens of civilians.

The observatory said at least 40 civilians died, including eight children, and even more were wounded.

Then more bombing raids slammed into the town on Saturday, the Britain-based Observatory and a civil defence worker said.

“The bombing still hasn’t stopped. There are three warplanes in the sky and two helicopters,” Firas al-Doumi, a rescue worker inside Douma, told AFP news agency on Saturday morning.

With Moscow’s help, Syrian President Bashar al-Assad has ousted his armed opponents from nearly all of Eastern Ghouta, their former stronghold on the edge of the capital.

Since 18 February, the government’s offensive has killed more than 1,600 civilians and kept residents cowering in basements for weeks. A ground assault then sliced the area into three isolated pockets, each held by different rebel factions.

The regime has used a combination of fierce bombardment and two negotiated withdrawals to empty out 95 percent of the enclave but rebels are still entrenched in the largest town of Douma.

Assad is keen to recapture Ghouta to eliminate the opposition from the outskirts of Damascus and end years of rocket fire on the capital.

Under Russian-brokered deals, two rebel-held pockets of Eastern Ghouta were evacuated last month that saw more than 46,000 rebels and civilians bussed to opposition-held Idlib province in the northwest.

Moscow stepped in to negotiate a deal for Douma, the third and final pocket where Jaish al-Islam had been angling for a reconciliation agreement that would allow them to stay as a police force.

Following a preliminary accord announced by Russia on Sunday, nearly 3,000 fighters and civilians were evacuated from Douma to northern Syria.

But as talks dragged on, Syria and its Russian ally threatened Jaish al-Islam with a renewed military assault if they did not agree to withdraw.

It remains unclear exactly why the talks fell apart this week.

SANA said they faltered when Jaish al-Islam refused to release detainees they were holding in Douma, adding that the military assault would only stop if hostages are released.

“The talks were going well … Their only shared interests is the blood of civilians,” he said.

The resumption of strikes stunned civilians. “All of a sudden, with no warning, the shelling starts. There were 20 strikes in 15 minutes,” Mohammed, a medic, told AFP from Douma on Friday.

The wounded were being brought in with fractures and other injuries, and there had been three amputations on Friday alone, he said.

“The regime is trying to tighten the noose around Douma from the west, east, and south,” said Observatory head Rami Abdel Rahman.