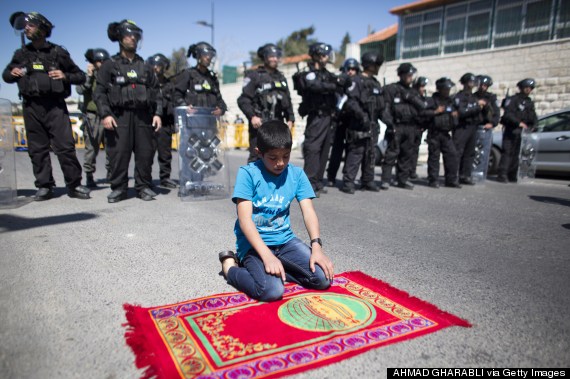 This inspiring picture by Ahmad Gharabli captures a Palestinian child praying to Allah in the presence of his oppressors.

By: Hesham A. Hassaballa

It has been a rough summer. While everyone around the world was trying – as best as possible during the long and hot Ramadan — to fast and re-connect with Allah, ​​the horrific images from Gaza kept coming incessantly. Next door in Iraq, the “Islamic State” continued its reign of terror and bloodshed, destroying historical relics and killing innocent people – Christian, Muslim and otherwise – with terrifying fervor. Add to this the continuing horrific civil war in Syria, the terror of Boko Haram, and attacks of the Taliban in Pakistan and Afghanistan, and it seems that the bleeding of the Ummah has no end in sight.

Here at home, it has been revealed that, despite assurances to the contrary, the government has indeed spied on American Muslims. That’s on top of the “terror experts,” who are nothing but, who disparage Islam and train law enforcement officers to suspect the entire Muslim community. Adding insult to injury, largely because of the terrible news from the Muslim world, the image of Muslims continues to deteriorate. Asked to rate various religious groups, our fellow Americans rated Muslims dead last.

Yup, it’s been a rough summer.

The question on many Muslims’ minds is what to do about this. Indeed, there are many responses, and I pray that no one responds by committing violence or harming anyone or anything. This is not the way of our faith, or our Prophet, upon Him peace and blessings, or our Allah. The other extreme — despair — must also be avoided. In fact, just like violence, it must be avoided at all cost.

Allah says in the Quran,

“O my Servants who have transgressed against their souls! Do not despair of the Mercy of Allah … (39:53)”

Remember the Prophet Jacob, who told his sons:

It may seem bad now, but our Ummah has seen bad days before, and — by the grace of Allah — they have passed into oblivion.

We should never despair.

In fact, to despair is to follow the path of Iblis, whose very name comes from the Arabic root balasa, which means “one who despaired.” Iblis, therefore, means “he who causes despair.” In fact, Iblis himself despaired after his arrogant and racist refusal to obey Allah’s command, and out of that despair came his pledge:

“Because You have thwarted me, I will lie in wait for them on Thy straight way (7:16)”

His hatred for us has come out of his despair, and thus we should actively resist, actively wage jihad, against falling into despair ourselves.

The Prophet Muhammad (upon Him peace and blessings) never despaired, despite the terrible guile, hatred and violence meted out to him because of his preaching. During one of the most difficult times of His prophetic life, as he lay outside of Ta’if, in shock and legs bleeding, his main concern was whether Allah was angry with him:

“As long as You are not angry with me, then I do not care [what happens to me].”

But, he also said:

“Nevertheless, I would be much happier with Your mercy.”

And that mercy came almost immediately: He was soon thereafter graced with the Night Journey and Ascension to the very presence of the Beloved. The Prophet (upon Him peace and blessings) never fell into despair, and neither should we. Yes, it seems the constant tirades of the Islamophobes’, and those Americans who heed their filth, are gaining ground. It seems like so-called Muslims who are committing acts of evil are tarnishing our faith. But remember what Allah says:

“Their intention is to extinguish Allah’s Light with their mouths. But Allah will perfect His Light, despite the hatred of those who reject the truth. (61:8)”

Allah is in charge, and in that fact, we should rejoice. In fact, in times like these, we must redouble our efforts to get closer to Allah, reach out to Him and bask in the light of His love and grace. We should ask Him for respite from these terrible times, and we use the spiritual benefits gained by our fast of Ramadan to better ourselves, because:

“Allah never changes the condition of a people until they change themselves. (13:11)”

Yes, we should pray for all those who are suffering. Yes, we should help relieve the suffering of the victims of oppression. We should try to engage our society so that more justice can be spread both abroad and here at home. No, we should never respond with violence and evil.

We should “never let the hatred [of a people towards us] move [us] swerve toward wrong and depart from justice … (5:8)”

And, we should also never, ever fall into despair. Remember:

“Do not think that Allah is heedless of the deeds of those who do wrong. He but gives them respite against a Day when the eyes will fixedly stare in horror (14:42)”

Allah is in charge. In that fact, we should rejoice.

And, may the Beloved Lord our Allah, the Beautiful and Holy Allah, the Glorious and Magnificent Allah bring peace and healing to our suffering and bleeding world.