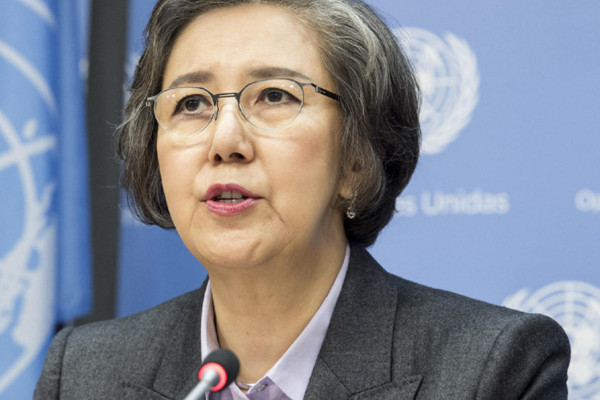 A top U.N. rights expert said the crackdown on Myanmar’s Rohingya minority bears “the hallmarks of genocide,” as a new report accuses Myanmar’s military of building bases where some of the Rohingya homes once stood.

Yanghee Lee, U.N. special rapporteur on human rights in Myanmar, used her strongest words yet to describe the situation in Myanmar’s northern Rakhine state to the U.N. Human Rights Council in Geneva Monday.

“I am becoming more convinced that the crimes committed following 9 October 2016 and 25 August 2017 bear the hallmarks of genocide, and call in the strongest terms for accountability,” she said.

The United Nations has previously used the term “ethnic cleansing” to describe the crackdown on nearly 700,000 Rohingya Muslims who were forced to flee to Bangladesh. Myanmar military soldiers are accused of executions, rapes and burning villages as a response to attacks on security outposts by Rohingya insurgents.

“Where there used to be Rohingya homes, markets and mosques, the authorities have now bulldozed them,” Amnesty International senior crisis adviser Matt Wells told VOA.

“In their place, what we are seeing on satellite imagery and confirmed by interviews that we’ve done, is that the authorities have built new security force bases, new roads and other infrastructure,” he said.

Wells said the new development makes it impossible for the Myanmar government to fulfill its pledge to allow Rohingya refugees to return to their homes.

“What we are seeing directly contradicts what the Myanmar government has been saying. Publicly, it says it is ready to start repatriating refugees that are in Bangladesh. But the reality is that they are often building on top of these former villages,” he said.

Amnesty used satellite imagery and interviews to document the destruction of villages in Rakhine state. The region has been largely sealed off to rights groups, the media and U.N. investigators.

Lee told the U.N. Human Rights Council that it will be impossible for the Rohingya to claim where they are from or where they previously had lived in Rakhine if the region’s landscape is significantly altered.

Htin Lynn, permanent representative of Myanmar, told the U.N. Council in Geneva that the upheaval and exodus of the Rohingya from Rakhine State is the fault of terrorist attacks by the Arakan Rohingya Salvation Army.

He said that most of the Rohingya villages remained intact, and legal action is being taken where there is clear evidence of human rights violations.