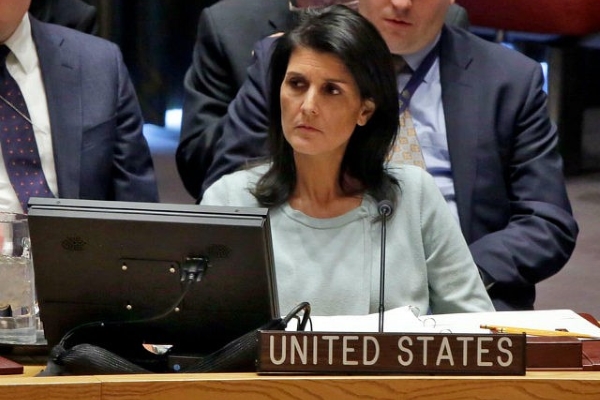 The United States has presented a new draft resolution to the United Nations Security Council demanding a 30-day ceasefire in Syria’s rebel enclave of eastern Ghouta and warned that if the council fails to act in Syria, Washington is prepared to take its measures on its own.

U.S. Ambassador to the United Nations Nikki Haley told the council on March 12 that a cease-fire resolution adopted by the Security Council two weeks ago “has failed” as the Syrian government, backed by Russia, stepped up its offensive in eastern Ghouta.

Russia has said the cease-fire could not be imposed by the Security Council without a deal between the warring parties.

“We have drafted a new cease-fire resolution that provides no room for evasion,” Haley said.

She added that, just as it did last year when it fired missiles at a Syrian government air base over a deadly chemical weapons attack, the United States would take action on its own if a cease-fire could not be agreed upon.

“It is not the path we prefer, but it is a path we have demonstrated we will take, and we are prepared to take again,” Haley said.

“When the international community consistently fails to act, there are times when states are compelled to take their own action,” she added.

Based on reporting by AP, Reuters, and AFP