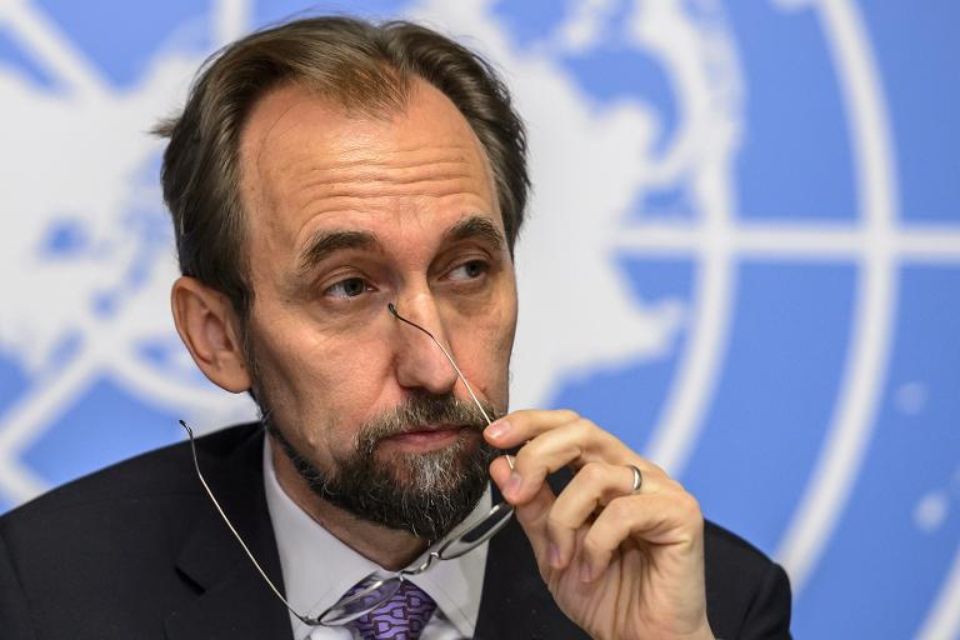 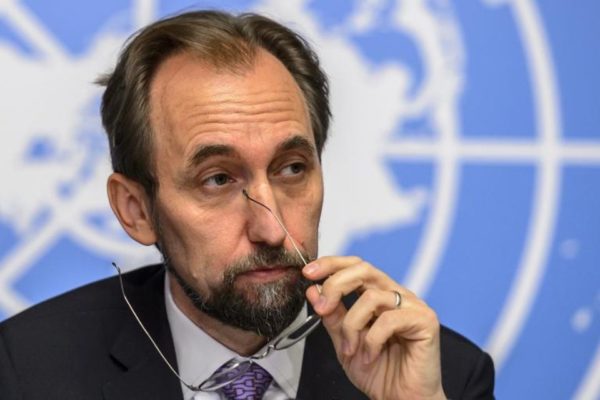 Two United Nations human rights officials on Friday recommended that those who have committed atrocities against Rohingya Muslims in Myanmar’s Rakhine state be prosecuted for crimes, days after another U.N. envoy reported that members of the minority group continue to suffer abuses and forced starvation at the hands of the government military.

Zeid Ra’ad al-Hussein, the U.N.’s human rights chief, asked the U.N. General Assembly to refer the atrocities to the International Criminal Court (ICC) for prosecution and called on the Myanmar government to allow independent investigators into northern Rakhine to probe suspected “acts of genocide” against the Rohingya.

“We are saying there are strong suspicions that, yes, acts of genocide may have taken place,” Zeid told reporters at a news conference in Geneva, Switzerland, Reuters reported.

Nearly 700,000 Rohingya have fled Myanmar to escape a brutal crackdown by security forces that began in later August 2017, and included indiscriminate killings, torture, arson, and rape, in what the U.N. and the United States have said amounted to ethnic cleansing.

The army has denied the allegations of brutality, saying its own investigations have cleared troops of the alleged abuses. The Myanmar government has also denied the accusations and prevented a U.N.-appointed mission from entering the country to conduct an independent investigation.

Zeid’s remarks came two days after he said that his office believes that ethnic cleansing is still underway in Rakhine state, as evidenced by the emptying of the Rohingya community in Maungdaw township, the continued flight of people to Bangladesh, ongoing persecution and violence in other towns and villages, and reports about deliberate attempts to starve out the Rohingya.

“This Council is aware that my office has strong suspicions that acts of genocide may have taken place in Rakhine state since August,” he said Wednesday in an address in Geneva on the situation of human rights around the world.

“I am therefore not surprised by reports that Rohingya villages which were attacked in recent years, and alleged mass graves of the victims, are being bulldozed,” he said. “This appears to be a deliberate attempt by the authorities to destroy potential evidence of international crimes.”

Also on Friday, Yanghee Lee, the U.N.’s independent investigator on human rights in Myanmar, said there is more evidence to support suspicions that genocide has taken place, and she called for the prosecution of crimes committed against entire ethnic and religious groups, Reuters reported.

In a report to the United Nations Human Rights Council, Lee said she was “increasingly of the opinion that the events bear the hallmarks of genocide and therefore calls in the strongest terms for accountability.”

“The government leadership who did nothing to intervene, stop, or condemn these acts must also be held accountable,” she said in the report based on interviews she had with Rohingya survivors of the crackdown who are living in displacement camps in Bangladesh.

The Myanmar government has temporarily barred Lee from visiting the country for her periodic missions to evaluate rights developments, particularly in violence-wracked Rakhine state.

The calls by Zeid and Lee come on the heels of remarks by Andrew Gilmour, U.N. assistant secretary-general for human rights, who on Tuesday said that Myanmar is continuing its “campaign of terror and forced starvation” against the Rohingya in northern Rakhine state.

Myint Thu, permanent secretary of Myanmar’s Ministry of Foreign Affairs, told RFA’s Myanmar Service on Friday that the government will hold a press conference on March 14 to respond to Zeid’s call for crimes against the Rohingya to be referred to the ICC.

“As our National Security Adviser Thaung Tun said on Thursday, we need clear evidence to support accusations that ethnic cleansing or genocide has been perpetrated against its Muslim minority in Rakhine state as well as on the responsibility to protect,” he said. “We won’t accept anything without evidence.”

He went on to say that in the past Myanmar has adopted both offensive and defensive approaches to dealing with the U.N., but now it has a “cooperative approach.”

“We have a normal relationship with the U.N.,” he said.

Myanmar and Bangladesh are preparing to repatriate refugees who wish to return voluntarily to northern Rakhine. The program was scheduled to begin in late January, but has yet to get off the ground, with each side blaming the other for delays.

One Bangladeshi senior minister recently called the Myanmar government “evil” and said he did not believe that hundreds of thousands of Rohingya refugees could be repatriated.

Thaung Tun dismissed the remark as an individual opinion and said Myanmar officials have been ready to take back refugees since Jan. 23.

“[But] if his condemnation represents the opinion of the Bangladeshi government, then it could damage the two countries’ relationship,” he said.

Deep-seeded hatred of the Rohingya, who are viewed as illegal immigrants from Bangladesh in Buddhist-majority Myanmar and are subjected to systematic discrimination, is rampant in other parts of Rakhine state and around the country.

A prominent ex-Buddhist abbot who helped organize a rally against the Rohingya outside the U.S. embassy in Yangon in April 2016 was freed from prison on Friday after serving three months in jail for inciting unrest during the protest.

Parmaukkha, who claims he was framed by police, said he will hold a press conference on March 12.

“I was framed and arrested by Yangon Division Police Officer Myint Htay,” he said. “I will keep working on national affairs as well as on the rule of law with other nationalists and politicians”

“I would like to say that we don’t have rule of law under this government’s term because the Ministry of Home Affairs has control over this matter,” he said, referring to one of three ministries in Myanmar run by the powerful armed forces.

Parmaukkha, who once belonged to the ultranationalist Association for the Protection of Race and Religion, better known as Ma Ba Tha, left the anti-Muslim group in 2016 reportedly over political differences.

Besides the crisis involving the military in Rakhine state, Myanmar’s de facto leader Aung San Suu Kyi has had to deal with the fallout of skirmishes between the national army and ethnic militias in other parts of the country.

In northern Myanmar’s Kachin state, government soldiers stand accused of killing two ethnic Kachin civilians whose bodies were found in the city of Bhamo on Friday.

Local residents saw soldiers detaining Hpaugan Yaw, 65, and Nhkum Naw San, 35 as they farmed a field near Hkat Pra village in Mansi township on Jan. 31. The two had not been seen or heard from since then.

“I was informed by some people from Bhamo who said that two bodies were found, and that they reported the discovery to police officers and the administrator of Mansi,” said Lamai Gum Ja, spokesperson of the Peace-talk Creation Group, a Kachin-based organization that arranges meetings for peace talks in the region.

“Because this area is under the martial law, they also reported it to the Northern Military Headquarters,” he told RFA. “They said they received permission to get the bodies, and they are on their way with police officer, the administrator, and doctors.”

RFA was unable to reach the families of the two men or township police officers.

On Feb. 20, East Asia-based Fortify Rights called on Myanmar authorities to investigate and immediately account for the whereabouts and well-being of the two men who were feared to have been forcibly disappeared by the military.

Two eyewitnesses told Fortify Rights that they saw the two men in the custody of Myanmar soldiers with their hands tied behind their backs and later heard shots ring out as they made their way home.

Government troops have regularly clashed in the state with the Kachin Independence Army (KIA) ethnic militia which controls large swathes of territory there since a 17-year bilateral cease-fire agreement collapsed in 2011.

The clashes have left hundreds dead and more than 100,000 displaced since that conflict resumed in June 2011 and later spread to neighboring northern Shan state.

The murders of the two men are not the first incident of apparent killings of ethnic Kachins by Myanmar soldiers. In May 2017, six troops murdered three residents of the Maing Hkawng camp as they gathered firewood in a forest. In January, a military tribunal sentenced the soldiers to 10 years in prison.

Zeid briefly mentioned the violence against civilians in Kachin and neighboring Shan state in his remarks on global human rights before the Human Rights Council on Wednesday.

“In Shan and Kachin states, civilian casualties continue to be reported as a result of attacks by the security forces,” he said.