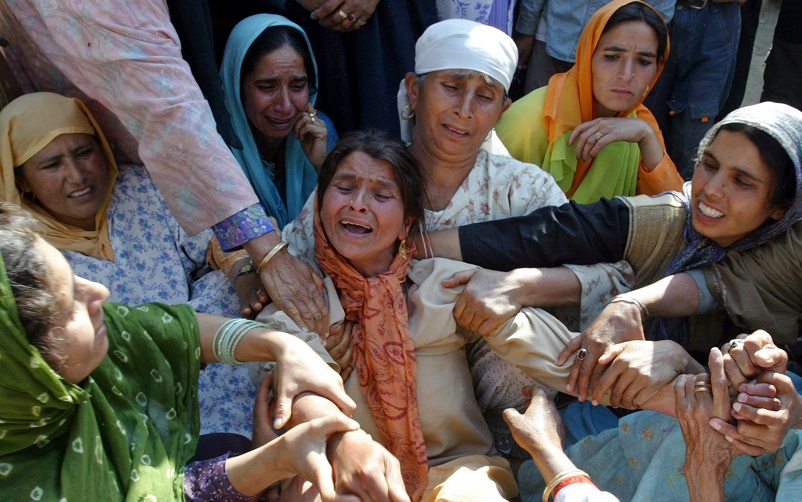 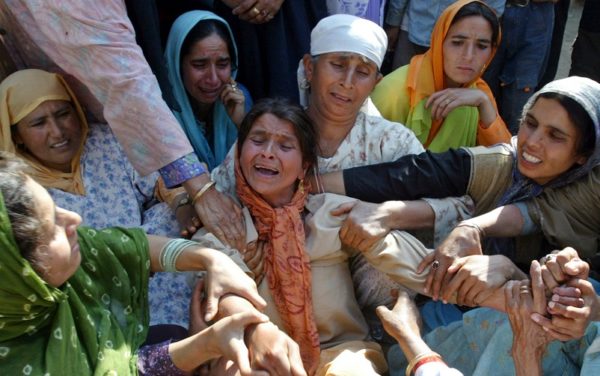 India-administered Kashmir — Just about a month after the Indian Army killed three civilians in Ganovpora, a village in southern India-administered Kashmir, nothing remains here to show the frenzy the people describe. Neither the passion among the people at the killing of a local fighter in a gun battle by the Indian forces, nor the 28 armoured army vehicles that came under a hail of stones from ordinary people. No residual shells pointing to the barrage of bullets fired by the Indian army which according to villagers lasted for two and a half hours. Nothing.

All that remains are the broken glass panes, pockmarks in the walls and three damp graves alluding to Kashmir’s fresh ‘martyrs’; and a sense of silence that hangs about the homes.

Meanwhile, in the immediate aftermath of the killings on January 27, the local police filed a case against an Indian army officer named Major Aditya Kumar. He led a unit of troops in the village and ordered them to open fire on the civilians. Soon after, the local Indian controlled government in the region ordered a probe.

According to the Indian army their convoy came under attack by a group of stone-pelters and its personnel resorted to firing as a measure of self-defence.

Major Kumar’s father, himself, a serving Lt Col in the Indian Army, approached the Indian Supreme Court arguing his son was being targeted while he was “performing his bona fide duties.” On February 12, the Indian Supreme Court gave a stay order, asking police to halt all investigations into the killings and refrain from taking any “coercive steps” against the accused Major, bringing relief not only to the accused Major but also the entire Indian military operating in Kashmir.

In Ganovpora, however a village of concrete houses, apple orchards, narrow tarmacked roads, and a vast Indian Army camp nearby — the people seemed to care very little about the court’s ruling. From this small village in Kashmir, the Indian Supreme court in New Delhi, almost 500 miles away,  might as well be in another country. Its existence appears to be of no concern to the people here.

“It is all futile, all of it,” says Tasleema, a bespectacled woman in her forties. “This interview; the case in some Indian court; the noise; all of it. Futile.”

She paces across the room, reluctant to sit down and speak about her 17-year-old son, Sohail Javed, who was one of three boys killed by the Indian Army outside their home. Sohail studied Science in class XII. Mendeleev’s periodic table is pasted on the pink wall.

Who, then, is going to do the justice for her slain son?

“God,” they all say in unison, Tasleema, her brother-in-law, her two young nieces, and an old man from a neighbouring village who showed us the way to the house. “God!”

“God is watching,” Tasleema says. “The One God. And only He will do justice.”

They refuse to even acknowledge the Indian Supreme Court saying they expect nothing from it, that it is the court for the Indians, not for the Kashmiris.

The lack of accountability for the Indian armed forces in Kashmir, in fact, seems to validate the point the family makes. No Indian soldier has ever been prosecuted in a court for human rights violations in Kashmir since 1990 when a mass rebellion against Indian rule erupted in the region. While at least 75,000 Kashmiri people have been killed, about 8,000 people have reportedly disappeared in custody. Cases of sexual violence against women by the Indian forces and torture abound, not a single Indian soldier has been prosecuted in a court of law.

“Who have the Indian courts given justice to in Kashmir in all these years that they will give us justice now?” asks 16-year-old Bilqeesa Gani, a cousin of the slain boy. “We expect nothing from Indian courts.”

A special impunity law called the Armed Forces Special Powers Act (AFSPA) protects the Indian Armed forces serving in Kashmir from coming under even the purview of the Indian civil courts.

Under the AFSPA, “bona fide mistakes” committed while “acting in good faith” by the Indian soldiers in Kashmir cannot lead to “prosecution or other legal proceedings … except with the previous sanction of the Central [Indian] Government.”

And last month, the Indian government revealed that between 2001 and 2016, the Defence Ministry received 50 requests for sanction for prosecution against Indian Army personnel from the local government in “India-administered Kashmir”. The sanction, they said, was denied in 47 cases, while three cases were still pending. Seventeen of the 50 cases were related to civilian killings, 16 to custodial deaths, eight to custodial disappearances, four to rapes and molestation.

An Indian soldier cannot be taken even to an Indian court for a custodial killing or a rape in Kashmir, even though rape does not fall in the category of “bonafide mistake”.

The Army holds that it tries its officers and soldiers accused of human rights violations in its own internal courts, a claim rendered meek by the notorious Pathribal and Machil cases.

In the Pathribal case of 2000, the Indian Army claimed to have killed five foreign militants who later turned out to be Kashmiri civilians who had been abducted from their homes. Five Army officers were accused of custodial killings, and the Indian Army went to the Indian Supreme Court, which gave it an option – prosecution in a criminal court or court-martial. The army chose the court-martial.  After the “summary of evidence” stage, the army’s court said there was no evidence to prosecute the officers.

In the Machil case, the Indian Army in 2010 claimed to have killed three foreign militants in the Machil area near the de-facto border with Pakistan. The three slain men, according to the police probe, were civilians who had been lured for jobs and killed by the army men in a fake gun battle to claim promotion and awards.

The army court first sentenced the six accused, including a colonel and a captain, to life imprisonment for killing three civilians but then bailed them out after the Armed Forces Tribunal suspended the sentence.

Last year, a video showing a Kashmir man tied to the front of an Army jeep during pro-independence protests in the region became viral immediately arousing debate about the use of Kashmiris as human shields by Indian forces.

The Indian state stood in support of the accused Major Indian Army Major Nitin Gogoi; and the army awarded him saying it was “to ensure the confidence level of the officer and others operating in a similar environment.”

In the backdrop of this systemic design that allows and condones the perpetration of human right violations by Indian soldiers in Kashmir, the Supreme Court’s new order asking police to stop investigations in a case may not seem significant, but human right groups argue that it is a sign of the worsening of accountability of the Indian forces born out of a kind of competitive fascism in India.

“Earlier, there was the option for people to file a case, and the police could conduct an investigation; and at a later stage the army could save its soldiers against any prosecution. But now, the Supreme Court of India has basically said the police should not conduct even investigations. This is the fascism of the present government at work a step ahead of the fascism of the Congress Government,” Khurram Parvez, a well-known human right activist working in the region, told TRT World.

The Hindu rightwing Bharatiya Janata Party (BJP) that rules India and is also in power in a coalition government in IAK consistently maintains that they will not allow anything that “lowers the morale of the Indian Army in Kashmir.”

Khurram said all Indian institutions had been hollowed out beyond measure, and the people in Kashmir remember the past well enough to know that they must not have any hope from them.

“In a sense the statement of the people that God alone will do justice is not merely a religious or spiritual statement but a political one. It is as political as anything can be,” Khurram said.

In Balpora, adjacent to the Ganovpora village, Javaid Ahmad’s father, mother, two sisters and a niece sit on the verandah in the lukewarm winter sun. Javaid too was killed in the army firing, and the same silence that hung about Sohail’s house hangs here too.

“Are you from India?” his father, Abdul Rashid, asks in a kind of dark humor. “I don’t want anything from you. What do you want from me?”

It takes a while to make Rashid speak about his son, to convince him to talk.

An illiterate farmer, he says, he wanted his son be educated and he sent him to school, and he was in college. He can never tell, he says, what the loss of his son means.

“The Indian Army killed him [Javaid] like they killed my nephew, five years ago. Aqib [his nephew] drove a water tanker and he also brought water to the army camp everyday, and one day some soldiers had an argument with him, and they beat him to death inside the camp. He was 17; my son was 21,” Rashid says.

His wife sitting nearby speaks about their son with visible pain, but not once does she cry.

“If you see his picture, you wouldn’t know how to look away. He was so handsome,” she says, almost smiling.

She says that she suckled them both – her son and his cousin [Aqib] – from the same breast, and it is strange that they are both dead.

“What justice did they do to my nephew that they would to my son? What justice can India give us?” Rashid asks.

Despite the bright sun, the air on the verandah is heavy with an impenetrable grief and a silence that seems not to break with words. Only Rashid smiles from time to time, revealing a set of dark broken teeth, and his hands shake uncontrollably as he scratches his hair and his face.

“The judgment is up to God. He is our judge. Only He,” Rashid and his wife say.

He and his wife and their daughters seem unaware of the stay order of the Supreme Court or the progress in the case or the lack of it, and in a sense, sitting quiet on their verandah in the warmth of the sun, they seem almost free.