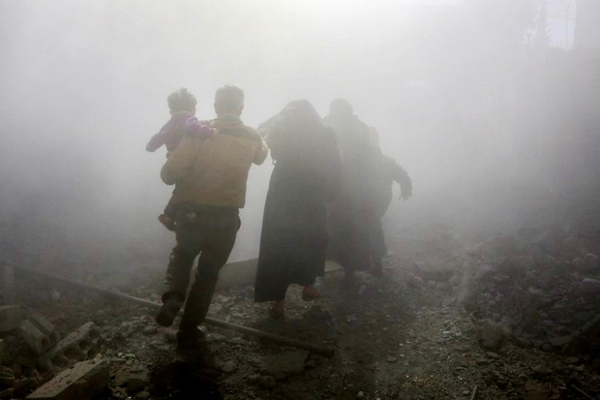 A Syrian family walks through a dust cloud while fleeing from reported regime air strikes in the rebel-held town of Jisreen, in the besieged Eastern Ghouta region on the outskirts of the capital Damascus, on February 8, 2018. / AFP PHOTO / ABDULMONAM EASSA

The shattered Damascus suburb of eastern Ghouta has become the focus of some of the most vicious Russian and Syrian government airstrikes of Syria’s civil war.

Amid the carnage and destruction wrought by barrel bombs and air-to-ground missiles that have left more than 250 people dead in 48 hours and more than 1,000 wounded, and as doctors struggle to save lives and amputate limbs in crude makeshift clinics amid blast tremors, rebels are preparing for a regime ground assault.

The suburb that once was home to two million people now has fewer than 400,000 inhabitants.

Rebels say his presence is a signal of what is to come.

Al-Hassan has been known to broadcast his own poems over loudspeakers as a warning to his foes of what will befall them, if they fail to surrender. He favors scorched earth tactics, relentless days-long shelling and airstrikes to prepare the ground for a final no-holds-barred house-to-house assault.

His only major defeat in the seven-year-long conflict was at Wadi Deif in Syria’s northwest in 2014. “You can leave. You can get out safely. Don’t let me destroy you,” he warned insurgents in northern Aleppo in 2016. The rebels expect similar warnings to be broadcast in the next few days.

Once an oasis in a bend of the Barada river, eastern Ghouta used to be the garden that fed Syria’s capital with fruit, vegetables and cereal. In 2013, it was the target of a Syrian government sarin gas attack that left 1,400 dead, say U.S. officials. Eastern Ghouta’s fall will mark the end of substantial non-jihadist military defiance of the regime. It is the last pocket of urban resistance to Assad that isn’t dominated by rebels tied to al-Qaida.

“As Assad locks in the civilians of Eastern Ghouta and then pummels them and even their hospitals, let’s not pretend this is just a war. It’s a massacre,’ tweeted Kenneth Roth, executive director of Human Rights Watch.

What is happening in eastern Ghouta has been compared to Russia’s 1994 assault on Grozny, the capital of the breakaway Russian republic of Chechnya. A comparison has also been drawn to the 1995 Srebrenica massacre of Bosnian Muslims in Bosnia-Herzegovina during the Balkans conflicts.

U.N. officials say they have run out of words to describe the carnage, with the U.N. children’s agency, UNICEF, issuing a wordless news release, adding in a footnote, “Do those inflicting the suffering still have words to justify their barbaric acts?”

The United Nations has called for an immediate humanitarian cease-fire, but the death toll is rising hour by hour and there are no signs Assad, with Russia’s support, is going to back off from a bid to roll up this final major rebel enclave near Damascus, an insurgent hold-out that has defied him since the early stages of the civil war and endured years of siege and indiscriminate shelling.

“This could be one of the worst attacks in Syrian history, even worse than Aleppo,” says Zaidoun al-Zoabi of the independent Union of Medical Care and Relief Organizations.Nearly 3,000 airstrikes have been recorded in the past three days, he and other relief workers say.

Sometimes there are up to 20 airstrikes a minute.

“There is no food, no medicine, no shelter,” one doctor working in the enclave told VOA.” Shops, markets, hospitals, schools, mosques, everything is coming under attack,” he added. People are returning to clinics with fresh injuries, hours after having received treatment for other wounds.

Last year, eastern Ghouta was designated a “de-escalation zone” by Russia and Iran, Assad’s allies, as well as Turkey. But photographs and videos posted on social media sites showing the shrouded bodies of dead children make a mockery of that classification.

Despite being party to an agreement to reduce the conflict in eastern Ghouta, Turkish officials have remained mute about this latest blitz. Ankara’s state-run press agency Anadolu focused its coverage Wednesday on Turkey’s military intervention in northwest Syria, where the Turkish military, alongside allied Syrian rebels, is seeking to seize the Kurdish enclave of Afrin.

The absence of clear condemnation by the Turkish government for the breach of the de-escalation agreement is connected, say Western diplomats, to Ankara’s military intervention in Afrin and the fear Damascus could come to the Kurds’ rescue.

On Tuesday, a convoy of pro-Assad Shi’ite fighters sought to enter Afrin to help the Kurds defend their enclave from the Turks. The Turkish military fired on the convoy and, according to Ankara, the pro-Assad fighters retreated. The dispatch of the convoy consisting of fewer than two dozen vehicles may well have been a message to Ankara, say diplomats, that Damascus won’t seriously disrupt Turkey’s incursion as long as it concedes Ghouta is Syria’s business.