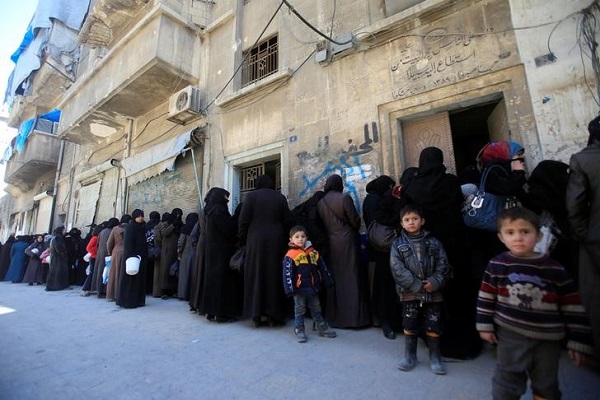 Islam was revealed to protect the natural rights of all human beings, their inalienable rights to life, property, and freedom. Violating these rights for any reason without a just cause is a major sin and it is a betrayal of Islam if Muslims claim such injustice is legislated by the Quran and Sunnah.

One reason we should be fearful of committing oppression is that Allah will alwaysanswer the supplication of an oppressed person.

Mu’adh ibn Jabal reported: The Messenger of Allah, peace and blessings be upon him, said:

Beware of the supplication of the oppressed, for there is no barrier between it and Allah. (Ṣaḥīḥ al-Bukhārī 4090,)

Abu Huraira reported: The Messenger of Allah, peace and blessings be upon him, said:

The supplications of three persons are never turned away: a fasting person until he breaks his fast, a just ruler, and the supplication of the oppressed which is raised by Allah above the clouds, the gates of heaven are opened for it, and the Lord says: By my might, I will help you in due time. (Sunan al-Tirmidhī 3598)

Ibn Umar reported: The Messenger of Allah, peace and blessings be upon him, said:

Beware of the supplication of the oppressed, for it ascends to Allah as if it were a flare. (Source: al-Mustadrak 118)

Umar ibn Al-Khattab, may Allah be pleased with him, said:

If we commit an act of oppression against someone, that person has a free supplication they can use against us. Will they ask Allah to punish us? Will they supplicate for evil against us? When we oppress them, we are actually turning ourselves over to their mercy, and oppressed people are not often interested in compassion or forgiveness for their oppressors.

On the other hand, if we ourselves are the victims of injustice, we can take comfort in the fact that we have a supplication that is guaranteed to be answered. We should use it to supplicate for goodness, rather than wasting it on vengeance.

The supplication of an oppressed person is always answered even if that person is an unbeliever or a sinner. Justice and the fulfillment of human rights are to be enjoyed by all people regardless of their religion.

Anas ibn Malik reported: The Messenger of Allah, peace and blessings be upon him, said:

Beware of the supplication of the oppressed, even if he is an unbeliever, for there is no barrier between it and Allah. (Source: Musnad Aḥmad 12140)

Abu Huraira reported: The Messenger of Allah, peace and blessings be upon him, said:

The supplication of the oppressed is answered, even if he is wicked for his wickedness is only against himself. (Musnad Aḥmad 8577)

A person’s religion, then, is absolutely no excuse to harm them in any way. Islam exalts justice as a universal value through which human beings must relate to one another and forbids the oppression of all people.

Verily, Allah orders justice and good conduct and giving to relatives and he forbids immorality and bad conduct and transgression. He admonishes you that perhaps you will be reminded. (Surat An-Nahl 16:90)

O you who believe, be persistently standing firm for Allah as witnesses in justice, and do not let the hatred of a people prevent you from being just. Be just, for that is nearer to righteousness. Fear Allah, for Allah is aware of what you do. (Surat Al-Ma’idah 5:8)

Al-Qurtubi comments on this verse, saying: “This verse shows that the unbelief of the unbeliever does not prevent him from enjoying justice.” (Source: Tafsīr al-Qurṭubī 5:8)

Abu Dharr reported: The Messenger of Allah, peace and blessings be upon him, said:

Allah the Exalted said: O my servants, I have forbidden oppression for myself and I have made it forbidden among you, so do not oppress one another. (Source: Ṣaḥīḥ Muslim 2577)

Jabir ibn Abdullah reported: The Messenger of Allah, peace and blessings be upon him, said:

Beware of committing oppression, for oppression will be darkness on the Day of Resurrection. (Muslim 2578)

The strength of the Muslim community is in its care for the natural rights of everyone including the weak, the wicked, and the hated. Justice is the true metric by which Allah supports or rejects a community. If our community is weak, then we must critically examine our failure to fulfill justice.

In sum, Allah will always answer the supplication of the oppressed even if the oppressed person is an unbeliever or sinner. Justice is a universal right for all people in Islam. People have the right to be protected in their lives, wealth, and freedom. If we fail to fulfill their rights, then we have surrendered our fate to their supplication.