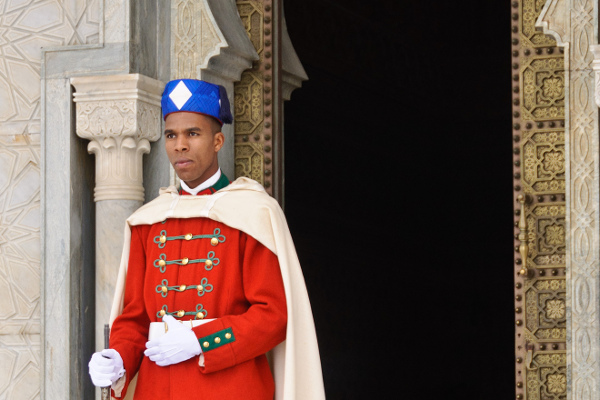 One of the Royal Moroccan Guards, formerly known as the Black Guards, at the Mausoleum of Mohammed V in Rabat, Morocco. /Image: Mark Fischer via Flickr

Growing attention to the racial and colour-based discrimination that sub-Saharan Africans and African slave descendants face in the Maghreb and in the Middle East has opened up new spaces to debate the relationship between ‘racism’ and legacies of slavery in the two regions. While these debates are far from new in a context like Mauritania, where former slaves and slave descendants have struggled for decades against descent-based discrimination, in many other North African and Middle Eastern countries they have emerged only relatively recently. This is perhaps because, as the Moroccan historian Chouki El Hamel notes, a “culture of silence” has long prevented these countries from engaging with, and discussing overtly, questions of race, slavery and colour.

With this week’s special series, we seek to unpack the ‘racial issue’ in different post-slavery contexts in West Africa, North Africa and the Middle East by interrogating its connections with local histories of slavery and their contemporary legacies. Drawing on fresh case studies from Senegal, Mauritania, Morocco, Tunisia, Emirates and Yemen, the contributors reflect on the complex intersections of historical and contemporary dynamics that shape present imaginations of ‘blackness’, black identities, and belonging. They also look at new forms of racial discrimination and activism based on specific constructions of race.

Very few authors have looked at the racial legacies of slavery in these contexts to date, in contrast to the relatively large amounts of scholarly attention shown to the memory of the transatlantic slave trade and race in the post-slavery Americas. That is thankfully starting to change. A growing body of historical works (think Paul Lovejoy, Martin Klein, Alice Bellagamba, Ann McDougal, Ehud Toledano, John Hunwick, Eve Troutt Powell, Terence Walz, Kenneth Cuno, Bruce Hall, Chouki El Hamel, Ismael Montana and Behnaz Mirzai) have significantly enriched our knowledge of the history of slavery and race in West Africa and the Mediterranean Muslim world. A number of anthropological studies have furthermore explored the shadows of slavery in the lives of slave descendants and haratin (a term generally translated as ‘freed blacks’ or ‘free blacks’), especially in Mauritania and in the Maghreb area.

However, we need to explore if and how current developments are reshaping racialised dynamics in social, political and intimate lives. Tracing the local meanings of race, with its complex relations to ideas of colour, origin, blood and descent, the contributors seek to interrogate how current expressions of racism connect with historical experiences of slavery.

Since the early 2000s, the francophone magazine Jeune Afrique has published personal testimonies of both Black Maghrebians and sub-Saharan Africans. The questions posed regarding identity and discrimination in these narratives became more urgent following the protests and revolutions that took place in many North African and Middle Eastern countries in 2011. In post-revolution Tunisia, for example, we’ve seen unprecedented forms of black rights activism that question the very idea that black emancipation can exist without a continued struggle against racism.

In 2014, in Morocco, the national campaign “my name is not a negro” (ma smitish ‘azzi) gave public visibility to the issue of racism in Moroccan society. In March 2016, a network of associations launched the international anti-racist campaign “neither serfs nor negro: stop that’s enough” (ma oussif, ma ‘azzi: baraka wa yezzi) in Morocco, Tunisia, Algeria and Mauritania. From Mauritania to Yemen, local anti-racist movements and societal debates have enabled novel political practices, languages and subjectivities to emerge. To what extent, we ask, are current anti-racist movements and debates on race able to capture the complexity and multiplicity of the experience of ‘blackness’? What histories and vocabularies are mobilised to raise public awareness and attain political goals?

Engaging with these questions, some pieces reflect on the emergence of race in their interlocutors’ political imaginations and public actions. In Mauritania, where slavery was abolished in 1981, the anti-slavery organisation El Hor (established in 1978) has denounced the persistence of slavery and its consequences on the lives of the haratin in terms of the socio-political stigmatisation and chromatic demonisation. However, as Giuseppe Maimone shows, with IRA Mauritanie, a local organisation founded by Biram Dah Abeid in 2008, ideas of colour and racial discrimination have started to replace the classic focus on slavery and descent-based forms of discrimination of previous antislavery movements.

In Yemen, a political discourse based on colour has been mobilised by the akhdam, a dark-skinned marginalised group, to gain a public voice and denounce their socioeconomic and political discrimination. As Luca Nevola shows, in a society in which individuals and groups are ranked according to their genealogical origin, an emphasis on colour entails a crucial shift in the common sense representations of this group. Crucially, Nu’man al-Hudheyfi, the political leader of the akhdam, reference prominent figures like Martin Luther King and Nelson Mandela to give international visibility to his political struggle.

In Morocco, it has been the growing public attention to violence and discrimination against sub-Saharan Africans that has recently opened a debate on the issue of anti-black racism and its connections to the history of slavery. Against the backdrop of these debates, Laura Menin shows how Senegalese students and young professionals experience, interpret, and reckon with racism in their everyday lives. Their stories suggest that while the legacies of slavery affect local constructions of ‘blackness’, current racism against black Africans also speaks to contemporary dynamics in Morocco, in which media stigmatisation, unemployment, widespread poverty and social insecurity work together to nourish social tensions and resentment vis-à-vis the “new” comers.

From different perspectives, these pieces show the complex ways in which ‘blackness’ is embodied, experienced, represented and contested by different social actors – be they slave descendants of African origins, haratin, or Sub-Saharan African students and professionals.

The processes of abolition and emancipation followed different paths and took place at different times in North Africa and the Middle East. The consequences have also varied greatly depending on the context. Yet while not all black-skinned people are descendants of slavery, nor are all slave descendants black, one important legacy that this history has left behind across the board is the close connection between blackness and slavery in the popular imagination. This had led socially ‘white’ people to position socially ‘black’ people in lower or subordinate positions.

In many contexts, colour attribution reveals more about local dynamics of power, status and origin than colour itself. This emerges clearly in Marta Scaglioni’s piece on the meanings and practices associated to ‘blackness’ among the ‘Abid Ghbonton, a community of slave descendants in southern Tunisia. She shows how visions of ‘blackness’ rooted in the history of slavery in Tunisia re-emerge, in different guises, in her interlocutors’ everyday lives and aesthetics. This makes both ‘blackness’ and colour central concerns, for women especially, in relation to marriage, beauty, and social prestige.

Not all countries have, like post-revolution Tunisia, begun to centre questions of race and colour in public debates. In other contexts, like the Emirates, these remain taboo topics. Former slaves became Emirati citizens in 1971, several years after abolition in 1963, and since then the process of modern state-building has since sought to include them within a single ‘Arab’ national identity. As a consequence, the roots of many Emiratis in the Indian Ocean and East Africa have become lost. They have not been forgotten, however, and even though the slave past is officially silenced, Idil Akinci shows how the daily dynamics of colour, origin, and race expose the limits of Emirati citizenship in absorbing difference.

It is often when marriage is at stake that questions of colour and origin matter, making a slavery past vividly present in people’s lives. Alice Bellagamba’s contribution focuses precisely on marriage, a crucial question in the Kolda region of Senegal, as one important site where the shadows of slavery become palpable. In this context, a marriage between a slave descendant and a person of free or noble ancestry isnot only met with social opprobrium on the side of the latter, but also considered unideal by the person ‘marrying up’. Even though an increasing number of young people aspire to a marriage based on love rather than on local norms, questions of origin and race continue to have an impact in a context where marriage remains a key factor of social reproduction.

Taken together, the pieces found in this special feature draw attention to the multiple and complex ways the shadows of slaveryare experienced, reckoned with, and even politically mobilised by different social actors in West Africa, North Africa and the Middle East. These present pasts, as Alice Bellagamba reminds us, overlap with and influence current socio-political dynamics.