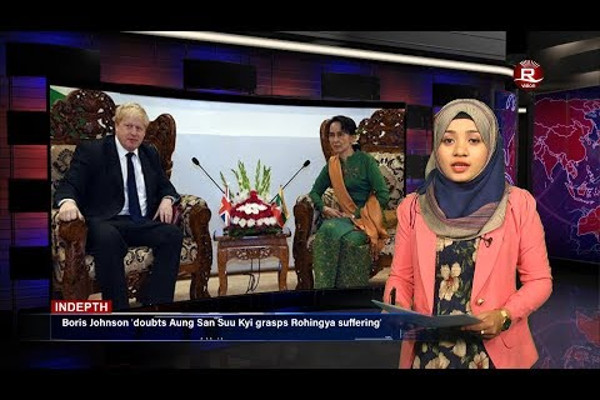 In Ampang, a high-rent district in Kuala Lumpur, a studio and newsroom of a Rohingya-run operation churn out online broadcasts about dramatic developments in Myanmar’s Rakhine state for an audience of Rohingya refugees in Bangladesh and beyond.

Because access for journalists to Rakhine, the home of the stateless ethnic group, is tightly controlled by Myanmar’s government, Rohingya Vision TV as it calls itself relies on a network of dozens of anonymous local stringers and sources to feed it information and images about the news there, said Muhammad Noor, the channel’s  managing director and co-founder.

“We think that we can’t wait for international media to come and ask for our stories. We need to have our own media so we can tell our version of the story,” the 36-year-old Rohingya, who is based in Kuala Lumpur, told BenarNews, an RFA-affiliated online news service.

Rohingya Vision TV, which boasts that it is “the world’s first Rohingya TV channel and network,” is one of at least five Rohingya-language news sites operating on YouTube and geared for the Rohingya diaspora, as seen by BenarNews.

On Wednesday, the channel aired its “Rohingya Daily News” program on YouTube, an 11-minute video, which opened with a gleaming opening sequence that cut to an anchor presenting the day’s headlines in the Rohingya language. The video said it was “brought to you by the Rohingya Business Club.”

The Jan. 31 program led with a report about “Buddhist terrorists” allegedly torching more houses in northern Rakhine, followed by a report about Myanmar and Bangladesh saying they had agreed to include the U.N.’s refugee agency (UNHCR) in their bilateral deal to repatriate hundreds of thousands of Rohingya refugees to Rakhine from Cox’s Bazar, Bangladesh.

The day’s news also featured a report about the grand imam of the Baitul Muqadda, otherwise known as the al-Aqsa Mosque in Jerusalem, distributing relief supplies to refugees during a visit to Cox’s Bazar.

Government officials in Myanmar have rejected widespread allegations from refugees and human rights groups that Myanmar security forces committed large-scale atrocities against Rohingya civilians, although the United Nations and United States branded a military crackdown in Rakhine since August 2017 as “ethnic cleansing.” The crackdown forced at least 655,000 Rohingya to flee from Rakhine to southeastern Bangladesh.

The news operation employs nearly 100 people in six countries and produces content in four languages: Rohingya, English, Burmese and Arabic. Apart from Malaysia, which is home to a large Rohingya expatriate community, the operation is officially headquartered in Saudi Arabia and has offices and studios in Cox’s Bazar – home to the refugee camps in Bangladesh – as well as in Pakistan and Cyprus, Muhammad Noor said.

He declined to go into detail about the channel’s sources of funding, other than to say it was started in 2012 by a group of Rohingya entrepreneurs amid a wave of inter-ethnic violence in Rakhine that caused another influx of Rohingya refugees into Bangladesh.

When the operation began, “we called on some Rohingya merchants to fund our project, to buy some computers, production equipment, and put the team together,” Muhammad Noor said in a phone interview. He said the network was looking to get more financial backing, including from sources outside the Rohingya community.

“For now, we have enough. But we are expanding, and we definitely need more funders to support us,” Muhammad Noor said.

In its first year, “RVision,” as he referred to it, gathered Rohingya who possessed media skills, such as video editors and cameramen.

The operation started out with ambitions of setting up a radio station catering to Rohingya, but it proved to be too difficult to get the physical infrastructure in place in Rakhine, he said.

“Why we call RVision a network is because we have three news agencies, online TV, satellite TV, and also an online magazine,” he told Benar.

“We communicate with many international NGOs to provide them with factual data, so that they can convert [this] into a report, which is part of the advocacy,” he added.

More than half of the operation’s staff is based in Rakhine but it has no office there, according to Muhammad Noor.

The identities of the network’s correspondents in the field there are kept secret to protect them, he said.

“It’s not like in Malaysia or any other country. They cannot wear a tag and go around saying, ‘you know, I am an RVision reporter. I want to go here and there.’ They cannot do that,” he said, adding that the reporters do not travel around Rakhine but only report “secretly and quietly” about happenings in their localities.

‘Only source of news’

The news broadcast by RVision reaches refugees in Bangladesh through their mobile phones.

“We cannot watch any television here in the camps. So we depend on RVision on the YouTube for developments about Rohingya,” Anwar Sadique, who lives at the Lombashiar refugee camp in Ukhia, a sub-district of Cox’s Bazar, told BenarNews.

“We can see the news about the Rohingya in Myanmar from RVision. This is a good source of our information. To judge the authenticity of its news, we call our brothers in Arakan (Rakhine),” he added.

Abdur  Rahman, a resident of Kutupalong refugee camp, said the news channel was his “only source of news on Burma,” referring to Myanmar by its other name.

“We, the people, believe this channel,” he told BenarNews.