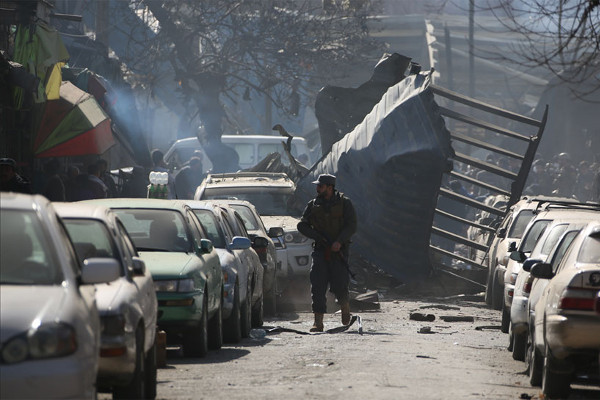 Afghan officials say the death toll in a massive suicide car bomb attack in a crowded area in central Kabul has risen to 95, with 158 others wounded.

Baryalai Hilali, the director of the government media center, told reporters that the toll might rise further as some of the wounded brought to hospitals were in “critical condition.”

Kabul deputy police chief Haqnawaz Haqyar said that victims were still being brought in to hospitals across the city.

Zabihullah Mujahid, a Taliban spokesman, claimed that the militant group was behind the attack, one of the biggest blasts to hit the war-torn city in recent years.

According to the Interior Ministry the attacker used an ambulance to pass through checkpoints.

“He passed through the first checkpoint saying he was taking a patient to the [nearby] Jumhuryat hospital and at the second checkpoint he was recognized and blew his explosive-laden car,” Interior Ministry deputy spokesman Nasrat Rahimi told the AFP news agency.

The United States and the United Nations have condemned the attack.

“Our thoughts are with the families of the victims who were injured and killed, and we mourn all those who lost their lives in this senseless attack,” Secretary of State Rex Tillerson said in a statement.

“The United States stands with the people of Afghanistan, and we remain firmly committed to supporting the Afghan people’s efforts to achieve peace, security, and prosperity for their country,” Tillerson said.

“The United States stands with the people of Afghanistan, and we remain firmly committed to supporting the Afghan people’s efforts to achieve peace, security, and prosperity for their country,” he said.

“On behalf of the United Nations in Afghanistan, I unequivocally condemn today’s attack in Kabul city in which scores of civilians were killed or injured,” Tadamichi Yamamoto, head of the UN Assistance Mission in Afghanistan said in a statement.

“Today’s attack is nothing short of an atrocity, and those who have organized and enabled it must be brought to justice and held to account,” Yamamoto said.

Eyewitnesses say that buildings hundreds of meters away were shaken by the force of the explosion.

The attack comes a week after an assault on the Intercontinental Hotel in the city that killed at least 25 people.

The attacker was spotted by security forces who opened fire on him, but he still managed to detonate his explosives, Zwak said.

The Taliban also claimed responsibility for that attack.

Afghan government forces have struggled to fight the Taliban and other militant groups since U.S. and NATO troops formally ended their combat mission in 2014.

Trump has said he wanted to shift from a time-based approach in Afghanistan to one based on conditions on the ground.