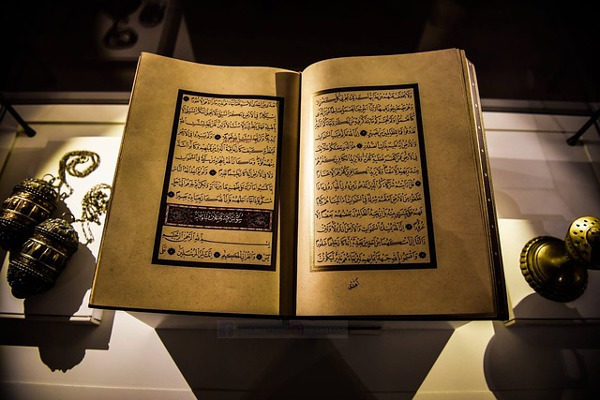 In the Name Of Allah, Most Compassionate, Most Merciful

1. One should understand the magnificent nature of the Qur’an. This is a divine gift from Allah, and a tremendous favor. One should bring to mind the favor of Allah and be thankful.

3. Paying attention to the Qur’an: One may avoid whisperings of the self. “Oh Yahya, take the book firmly,” which may be understood as … take the words contained in it with seriousness and sincerity.

4. Pondering over the verses. How? Recite it according to the Sunna with tarteel, a slow, measured, distinct manner. Tajweed helps in inward reflection. There’s a hadith from Nasai and ibn Majah that the Prophet, peace be upon him, prayed at night reciting one ayah repeatedly: “in tuaddhibhum fa ‘innahum ‘ibaaduk…” If You punish them, then they are Your servants, and if You forgive them, surely You are the Mighty, the Wise. (5:118)

5. Seek to understand the meanings. 1) in the linguistic sense – study a translation if you do not know Arabic, 2) and the deeper meanings found in tafsirs, 3) and with reflection. Studying ‘aqida helps, for example, reading verses about the power of Allah, and about His qadr. Don’t interpret it with your own opinion; go look it up in a tafsir.

6. Remove obstacles to understanding the Qur’an. There are four veils according to Imam Ghazali:

* Being overly concerned with outward recitation (this is one of the tricks of Shaytan to turn you away from reflecting on meanings). Find a middle path.

* Sin, both outward and inward. Sin creates darkness in the soul and clouds the mirror of the heart, so it doesn’t reflect the light of Divine guidance. How to polish the heart? With sincere and consistent repentance, and leaving sin. Keep doing this and striving until you leave those sins. This is a process: cleaning the heart and approaching Allah Most High.

* One finds sufficiency on finding how meanings relate to you from tafsir. However, this is an interpretation; these tafsirs shouldn’t take the place of personal reflection and application.

Take everything in the Qur’an as guidance for yourself because it is for all creation. When it talks about the oppressors, sinners, etc. look at your life, act on what’s implied relative to your life. “Fastaqim kama umirta,” be steadfast as you were commanded. Imagine how the Prophet, peace be upon him, applied the Qur’an to his life – his hair turned gray! His companions asked why his hair had turned white. He, peace be upon him, said, “Sura Hud and its sisters made my hair white.” He was upright and truthful in following the Qur’an. He took every address to apply to himself personally.

Feel the Qur’an when talking about Paradise, Hell, or anything, put yourself in tune with the Qur’an.

* The lowest grade: one supposes one is reading the Qur’an to Allah, as if one is standing before Allah, in His Divine Presence, and Allah is listening to one’s recitation. This is an inward state of begging, entreating, and supplicating.

* The middle grade: When one beholds Allah and sees for themself that Allah is addressing us with His favor. He is bestowing His gifts, His mercy through the Qur’an. There is a sense of shame, modesty (haya) and magnification (ta’dhim). One seeks to understand and be more serious. Now it is from Allah to you! There’s also a feeling of ecstasy, thankfulness, and joy! One piece of dust like you is being addressed by the Lord of every speck of dust!

* The highest grade: When one beholds the Speaker Himself and His Attributes. One does not see his own actions, but completely engrosses himself in beholding Allah Most High Himself. Then next, he sees the address of Allah Most High, then sees his own recitation.

10. Recite the Qur’an while knowing that there is no might or power except with Allah. Qul bifaDlillahi wa biraHmatihi… say by the Grace of Allah and His Mercy; in that let them rejoice – better than what they amass – whether (worldly or spiritual amassing).

Thank Allah upon good deeds. In addition, one always beholds one’s shortcoming in reciting it. And reminding ourselves that we are not being thankful enough, look even the Prophet’s hair turned gray…The soul is what turns to Allah…the body is just dust. We have infinite fear, and infinite hope in Allah… so turn to Allah and hope for His Pleasure.