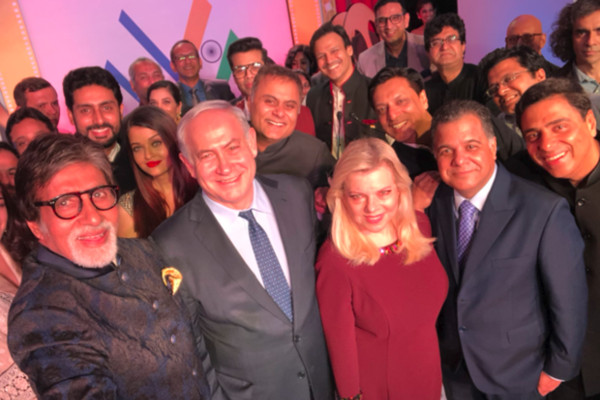 Pro-Palestine activists in India have accused Israel of exploiting Bollywood in a bid to improve its global image after Israeli Prime Minister Benjamin Netanyahu took a “selfie” on stage with legendary movie star Amitabh Bachchan while visiting Mumbai.

Activists made the claims after the Israeli government staged an outreach event titled “Shalom Bollywood” on Thursday in a bid to entice Indian directors and producers to film their movies in Israel.

Senior figures from India’s film industry, including Bachchan and his daughter in law, Aishwarya Rai, attended the event.

Protests took place outside the event hosted in Mumbai, the home of India’s cinema industry.

Apoorva Gautam, who heads the Boycott, Divestment, and Sanctions Campaign in South Asia, said that Israel’s appeal to Bollywood was reflective of a broader “ideological shift” in the country since the election of Indian Prime Minister Narendra Modi in 2014.

“These initiatives are ultimately part of a wider move by the Israelis to improve its image globally, as it continues to perpetrate war crimes against the Palestinians,” Gautam told Middle East Eye.

“The Israelis’ attention has now shifted to Bollywood, as the BDS movement gains traction in America and Europe.

“For many years Hollywood was used to depict Israel as being a free country that was democratic. But now more and more actors and industry leaders are coming out against Israel and subverting this perception.

“This is ultimately another form of cultural propaganda that must be condemned and stopped from taking place.”

India’s film industry is the largest in the world and worth billions of dollars.

Israel has run similar film collaborations with other countries in a bid to improve its global image including an initiative with Chinese cinema after its tourist industry suffered following its assault on Gaza.

The event was part of a six-day state visit by Netanyahu to India, which saw him visiting several cities across the country and meeting with Modi.

Bachchan claims to have no political affiliation but has been the face of several Indian government campaigns.

Plans to make Bachchan the brand ambassador for “Incredible India”, a global marketing campaign run by the Indian government to attract tourists to the country, were delayed after his name appeared in the Panama papers.

Imtiaz Ali, another notable Bollywood figure, was also pictured with Netanyahu on Thursday. He directed the Bollywood film Drive, funded by the Israeli Ministry for Tourism, and filmed in Israel.

Netanyahu is the second Israeli Prime Minister to visit India. His trip comes after Modi was the first Indian leader to visit Israel in 2017.