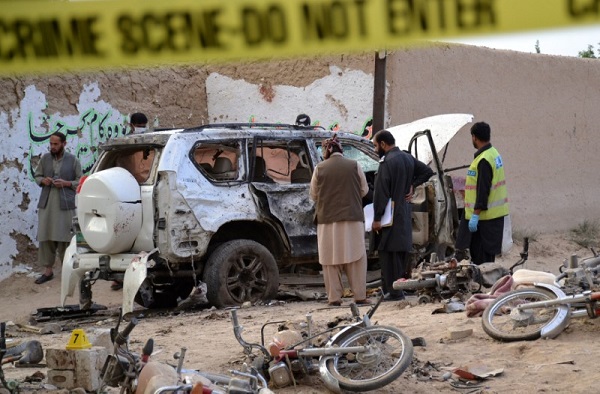 Security officers collect evidence as they investigate crime scene after a bomb exploded next to a convoy of deputy chairman of the Pakistan Senate, Senator Ghafoor Haideri in Mastung, Pakistan, May 12, 2017. REUTERS/Naseer Ahmed

More than 1,800 Pakistani clerics from different schools of Islamic thought have issued a fatwa declaring that suicide bombings are un-Islamic.

The clerics declared that suicide bombings are forbidden, or “haram,” under the principles of Islam.

The Islamic directive was revealed on January 16 in a book unveiled by Pakistani President Mamnoon Hussain and the state-run International Islamic University.

Hussain wrote in the book that the fatwa “provides a strong base for the stability of a moderate Islamic society.”

He said Pakistanis can “seek guidance” from the fatwa “for building a national narrative in order to curb extremism in keeping with the golden principles of Islam.”

Pakistan has been plagued for decades by Islamic militants who teach followers that suicide bombers are “martyrs” in a “holy war” to impose Islamic rule.

Foreign and domestic critics accuse the government and Pakistan’s security forces of collaborating with Islamic militants in order to use them as proxies in Afghanistan and India to achieve Islamabad’s political and military goals.

They say the government has turned a blind eye to radical clerics in Pakistan’s mosques for too long.

Although Pakistani authorities frequently condemn suicide attacks as fanatical and immoral, especially when civilians are killed, insurgents see the tactic as one of their most effective weapons.