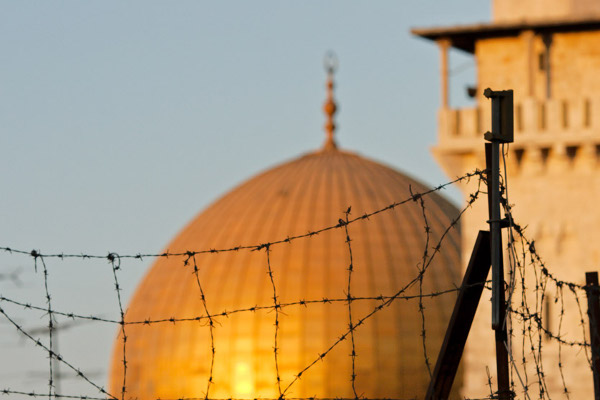 A barbed wire fence stands in front of Al Aqsa Mosque and the Dome of the Rock in Jerusalem on August 26, 2005.

The United States said on Tuesday that it would withhold at least $65m in pledged aid to the UN agency that provides services for Palestinian refugees and threatened to also make further payments conditional on other countries “stepping up to the plate” and contributing more.

The announcement follows threats by US President Donald Trump earlier this month to cut funding to the United Nations Relief and Works Agency for Palestinian Refugees (UNRWA) in a tweet in which he had accused Palestinians of showing “no appreciation”.

The head of UNRWA on Wednesday responded by saying that the agency would launch a global fundraising campaign to ensure that its schools and clinics remained open in 2018 and beyond.

But State Department spokesperson Heather Nauert confirmed on Tuesday that the US government had written to UNRWA to inform it that it was withholding $65m out of a total of $120m in funding pledged as a “first tranche” in 2018.

Nauert told a press conference that $60m was being sent to sustain schools and health services, but that the remaining $65m was being “frozen” while State Department officials on the ground looked at how the money was being spent.

Nauert said that a “potential second tranche” in 2018 was also being held.

“One of the things that the United States would like to do is see some revisions made in how UNRWA operates,” she said, adding that further funding could also depend on whether other countries were prepared to contribute more.

“The United States government and the Trump administration believe that there should be more so-called burden-sharing to go around,” said Nauert.

Nauert said that Washington would be asking Arab nations and others to “kick in money”.

A Palestinian official quickly criticised Washington’s decision to withhold some of the money and United Nations Secretary-General Antonio Guterres said he was unaware of any change on aid but he was “very concerned” about the possibility of a cut in funding.

UNRWA Commissioner-General Pierre Krahenbuhl said in a statement on Wednesday that the agency would appeal to other donor nations and launch a “global fundraising campaign” in response to a “dramatic reduction of humanitarian aid”.

“At stake is the dignity and human security of millions of Palestine refugees, in need of emergency food assistance and other support in Jordan, Lebanon, Syria, and the West Bank and Gaza Strip,” he said in a statement.

Krahenbuhl said 525,000 boys and girls in 700 UNRWA schools could be affected by the fund cut, as well as Palestinian access to primary healthcare, but he pledged to keep facilities open through 2018 and beyond.

“The reduced contribution also impacts regional security at a time when the Middle East faces multiple risks and threats, notably that of further radicalisation,” he said.

In a Twitter post on 2 January, Trump accused Palestinians of disrespecting the US despite receiving millions of dollars in aid from Washington.

Israel had urged the US to stop funding UNRWA, with Prime Minister Benjamin Netanyahu saying last week that the agency “must disappear from the world”.

In a statement on behalf of the PLO executive committee, Hanan Ashrawi accused the White House of “following Netanyahu’s instructions”.

She added that the US administration is targeting vulnerable Palestinians and “depriving the refugees of the right to education, health, shelter and a dignified life”.

The agency has laid off dozens of staff members in the West Bank and East Jerusalem and more than 100 employees in Jordan because of the delay and subsequent cut in the US payment, Haaretz reported on Monday.

On Monday, the PLO central council condemned the Trump administration for threats to cut UNRWA funding, saying that Washington is trying to absolve itself of responsibility for the Palestinian refugee crisis that it helped create in 1948.

More than 600,000 Palestinians were pushed out or forced to flee their homes before and during 1948 when the state of Israel was established.

Millions of Palestinian refugees, 1948 survivors and their descendants, are scattered in the West Bank and Gaza Strip and across neighbouring Arab countries.

They largely depend on UNRWA aid for healthcare, education and other essential services.

The Norwegian Refugee Council (NRC), which aids displaced people across the world, warned that the US move would have “devastating consequences” on hundreds of thousands of Palestinians who depend on UNRWA services to survive.

“We hope that the US administration and Congress can cooperate in reversing this politically motivated cut in aid before its effects ripple through the Middle East,” NRC Secretary General Jan Egeland said in a statement.

“In the meantime, we call on other donor nations to stand with UNRWA and Palestinian refugees and cover the massive shortfall left by the US administration.”

At the United Nations, Guterres told reporters that the services provided by UNRWA were “of extreme importance, not only for the well-being of these populations… but also in my opinion and an opinion that is shared by most international observers, including some Israeli ones, it is an important factor of stability”.

The Turkish Ministry of Foreign Affairs said cuts to UNRWA will “hamper the efforts towards a two-state political solution and regional stability”, adding that Ankara will increase its contributions to the agency.