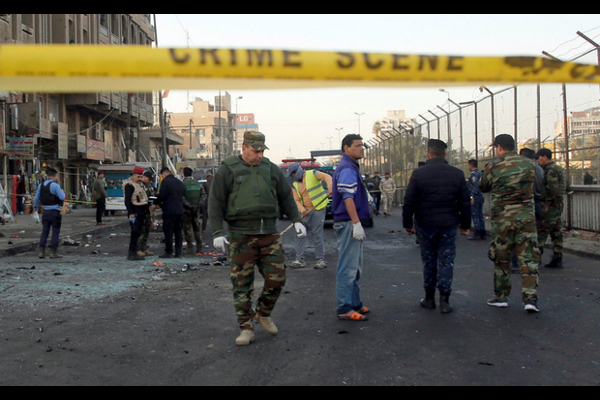 BAGHDAD – Most of the shops in Tayaran Square remain shut, their signs spattered with blood from the dead and injured cut down by the double suicide-bombing only hours before. Witnesses show grim photos on their phones – a severed leg on scattered glass, and corpses laid out on the pavement.

Over two dozen people were killed here in the latest suicide attack on Iraq’s capital, the fifth in Tayaran since 2009 and part of an emerging pattern so often predicted after the fall of the ISIS group – that it would switch from holding territory to terrorising Iraqi populations.

It is a prediction shared by Baghdad’s police chief, Ali Ghareiri.

“This morning, this area was targeted by two ISIS terrorists wearing suicide belts, and we expect more terror attacks like this because ISIS are changing their strategies in Iraq now,” Ghareiri told Middle East Eye as he walked across Tayaran Square nine hours after the attack.

“I am here today to inspect the area and identify any places that are vulnerable to future attacks and make a comprehensive plan for securing this neighbourhood,” he said.

“We need heightened security and very good intelligence if we are to prevent further such attacks.”

Ghareiri said Baghdad police department had sufficient men and equipment to secure Iraq’s capital, but admitted that the success of this was heavily reliant on enhanced intelligence operations.

Most of the victims had been some of Iraq’s poorest citizens, many from the rural south, who gather daily on the corners of the square before dawn, looking for casual labouring work.

Like many others, he is from Iraq’s south but unable to find employment locally. He has worked in Baghdad for years, sending his paltry wages home to his wife and four children in Nasiriyah.

“We arrive from around 3am and thankfully many had already found work for the day. If the explosion had been an hour or two earlier when there were more than 300 men standing on this very spot, many more people would have been killed.”

Kasim, a 34-year-old who was looking for casual work during the bombing, complained that no government representatives had visited since the attack.

“There are no jobs in our hometowns, we have no money and we feel that the government doesn’t even care about us or our basic human rights enough to come here and see our problems,” he said.

“The stallholders here all have to pay taxes but they get nothing in return, not even courtesy.”

Outside a tea shop, just metres from where the charred scalp and unidentifiable parts of the suicide bomber still lay, locals gathered around a mobile phone to watch CCTV footage recorded from a nearby premises showing the moments leading up to the explosion.

“That’s the bomber,” said one, pointing out a man moving swiftly down the street, strangely dressed in smart new shoes and an oversized jacket, with a scarf wrapped around his head.

“His clothes aren’t normal. It was warm today, and he didn’t need to be wearing a big coat like that, and you see how he walked strangely, fast, with his arms holding his coat closed.”

As the suspect disappeared behind a sign, the fire of the explosion filled the screen, sending labourers scattering in all directions.

The tea shop owner said it was the fifth time Tayaran Square had been targeted. The last attack was a year ago. One of the labourers pulled up his shirt to show horrific injuries he suffered in a similar bombing nine years ago.

“In 2009, it was me who was injured here, and today I carried the injured from the scene,” he said.

“It was the same place, just a few metres away. These are political matters, but every time it is the ordinary people of Iraq who are the ones who suffer while the politicians drive safely around in their bulletproof cars.”

Hotelier Raad described how the huge blast had shaken nearby buildings and shattered all the windows in his hotel. As he ran outside, there was a second explosion on the other side of the street, targeting a police checkpoint.

Swat officer Ibrahim, 32, patrolling the square in the afternoon, said two policemen were killed and four injured in the second blast.

“The terrorist detonated a suicide belt when he was right beside the police,” he said.

Swept to one side behind him lay the remains of humble livelihoods, hastily abandoned. Second-hand clothes from makeshift stalls, bread rolls for sandwiches and upturned plates from a nearby falafel bar in the gutter beside bloodstained sacking.

Raad said that swift road closures had made it impossible for ambulances to reach the scene for an hour and said he carried many of the injured to a nearby truck and drove them to a local hospital.

An easy target with no security

Although high-level security was deployed for the rest of the day, cynicism ran high among the poverty-stricken labourers. “It’s too late to improve the security now, after the explosions,” said Ali, 39.

“The security here before that attack was useless. This is a very busy area and there should have been a lot more checkpoints.”

Adjacent to the city’s hub for regional transport, Tayaran Square is always bustling with pedestrians and prone to heavy congestion, making it an easy target for bombers aiming for a high casualty rate.

Although Ghareiri and senior Baghdad officials have said the attack was carried out by ISIS, some bystanders claimed the attack was likely to have been politically motivated.

“Every time there’s an election in Iraq, it’s the same,” said a 40-year-old shopkeeper, speaking on condition of anonymity. “There will be more attacks for the next three months, right up until the elections.

“People say it’s ISIS, but we think it’s political. Now is the time when the politicians create chaos and then promise they alone can secure us, hoping for more votes.”

He said there had been a third bombing elsewhere in the city also on Monday morning that had gone unreported and that attacks in the city were routinely ‘played down’ in the media.

“They had closed the street and started cleaning it within 10 minutes this morning, clearing away the evidence, and then the police say everything’s fine, nothing happened,” he said.

“And the figures of the dead and injured often aren’t reported accurately.”

Another labourer Hassan, 45, said the attacks were a consequence of Prime Minister Haider al-Abadi’s decision, announced on Sunday, to forge a political alliance with some members of Iraq’s Hashd al-Shaabi forces.

The alliance, which reportedly alienated some key political figures, lasted less than 24 hours, with Abadi announcing late on Monday that they would stand separately.

As dusk drew in, the remaining labourers gathered to light small candles outside one of the shuttered premises where, in the early morning, their colleagues had been murdered.