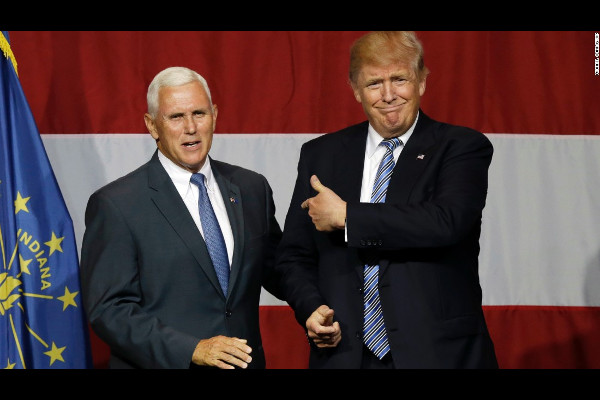 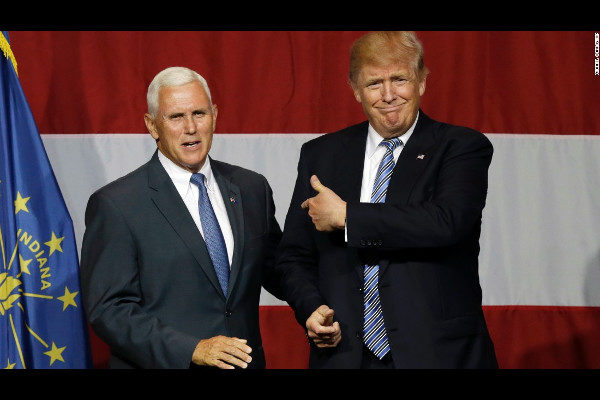 Donald Trump announced on 6 December that the United States was recognising Jerusalem as the capital of Israel. Most notable about his speech was not what he said, or how he said it, but the presence and demeanour of vice-president Mike Pence. Though an element almost entirely missing from the reams of analysis following Trump’s statement, Pence’s beliefs do much to explain Trump’s motivation.

Washington’s declaration of Jerusalem to be Israel’s capital has provoked sharp criticism across the world, most strongly in the Middle East where 57 members of the Organisation of Islamic Cooperation (OIC) called for East Jerusalem to be accepted as the capital of a Palestinian state. This may count for little in Trump’s White House, though there might be slightly more concern over the attitudes of the European Union in general and France in particular. Even Britain under Theresa May added its pennyworth.

The strong worldwide condemnation of a statement with little obvious benefit raises the question: why did Trump go so far at this time? Some pointed to his repeated backing for Israel during the presidential campaign in 2016 and the need to deliver to his core domestic base. In turn, this leads to a further question: why would this base be especially supportive of the Jerusalem policy? The answers almost certainly lie in one particular element of evangelical Christianity, most commonly known as Christian Zionism, and one of its most fervent supporters, vice-president Mike Pence.

To talk about the power of the “Jewish lobby” in the United States is actually misleading when the more correctly described “Israel lobby” wields far more electoral power thanks to its reinforcement by Christian Zionists. They number tens of millions of voters compared with the far smaller American Jewish population who, in any case, will tend more often to vote for the Democratic Party.

Nearly a third of Americans, around 100 million people, lean towards evangelical Christianity and of these perhaps a third embrace the Christian Zionist perspective. This is passionate in its support for Israel. Two of the most powerful groups that link with the pro-Israel lobby are Christians United for Israel and the International Christian Embassy.

An earlier column in this series, almost thirteen years ago, summarised the nature and development of this orientation of Christianity and sought to explain why it was so significant in the United States (see “Christian Zionists and neocons: a heavenly marriage“, 3 February 2005). Also known as “dispensationalism” or “dispensation theology”, it has been around for nearly two centuries but has only acquired real political significance in the last two decades. Its particular importance stems from three factors: the voting power of this substantial proportion of evangelical Christians, its deep-rooted support for the state of Israel, and its links with neo-conservatism.

The history of an idea

The essence of dispensation theology, allowing for internal variations, is that God has given a dispensation to the Jews to prepare the way for the second coming. The literal fulfilment of Old Testament promises to biblical Israel is now approaching an “end of days” that will involve a millennium of earthly rule centred on Jerusalem. Thus, the state of Israel, as a Jewish state, is a fundamental part of God’s plan, and it is essential for it to survive and thrive.

Dispensationalists would argue that this has always been a core part of the Christian message, but most historians of theology trace the doctrine to the thoughts and preaching of John Nelson Darby (1800-82), a minister of the Plymouth Brethren active in promoting it in the 1820s. It attracted particular attention in the United States as part of the Biblical Conference Movement in the 1870s, and flourished in the first decades of the 20th century.

The evangelist Cyrus Scofield was central to this process. His Scofield Reference Bible (1909) was the first book published by the new United States offices of the Oxford University Press. Its prolific theological interpretations helped make it perhaps the most renowned version of the bible in north American evangelism.

Michael Vlach describes how many Bible schools teaching dispensationalism were formed in the 1920s, the most significant being the Dallas Theological Seminary in 1924. The Scofield Bible became a standard source in these institutions, helping the phenomenon of “Christian Zionism” to lay down firm roots in the inter-war years.

In 1948, many dispensationalists saw the establishment of Israel as the beginning of a fulfilment of biblical prophecies. Later moments in the country’s history – especially the six-day war in 1967 and the election of Ronald Reagan in 1980 – gave a further impetus to the idea.

Bill Clinton’s presidency (1993-2000) was more difficult for dispensationalists, partly because they followed the preacher scandals of the late 1980s, and because Clinton was more favourable to the more secular elements of the Israeli political system, not least with its Labour Party. But during these years, the main pro-Israel lobbies in Washington – particularly the American Israel Public Affairs Committee (AIPAC) – sought to build close links with the Christian Zionists. In this, AIPAC and similar organisations were recognising the increasing demographic and political power of the Christian Zionists, and also securing a wider foundation of support at a time when American Jewish communities were scarred by deep internal divisions that threatened to reduce backing for Israel.

The American theologian Donald Wagner wrote a succinct account of Christian Zionism in 2003. He tracked the remarkable coming together of the movement with neo-conservatism during the George W Bush era (2001-08), quoting to this effect the once leading evangelical preacher Jerry Falwell: “The Bible Belt is Israel’s safety net in the United States.” Wagner remarked: “By 2000, a shift had taken place in the Republican Party. It began embracing the doctrines of neoconservative ideologues who advocated US unilateralism and favored military solutions over diplomacy. The more aggressive approach was put into action after Sept. 11, and to no one’s surprise, Israel’s war against the Palestinians and its other enemies was soon linked to the US ‘war on terrorism’.”

More recently still, the Barack Obama period (2009-16) was characterised by his administration’s suspicion of Binyamin Netanyahu’s government in Israel. This was heightened by the latter’s controversial speech in Washington in 2015, which aimed to undermine Obama while showing due deference to Christian Zionism (see “Christian Zionism and Netanyahu’s speech“, 5 March 2015).

If Trump’s victory brings the story up to date, the real focus should be on his deputy – for Mike Pence is now its really significant figure. Although Pence’s family background is Irish-American Roman Catholic, he embraced a markedly evangelical perspective at college and has maintained that faith orientation ever since. It includes a particularly strong Christian Zionist perspective.

That perspective has come to the fore in the year since the election. The scholar Daniel G Hummel notes the significance of Pence becoming the first sitting vice-president to deliver a keynote address to the annual meeting of Christians United for Israel. This, says Hummel, “marks a fundamental change in the language that the White House has historically employed to articulate the United States’ relationship with Israel”. He continues:

“Christian Zionism has a long history in American politics, but it has never captured the bully pulpit of the White House. Past administrations often used general biblical language in reference to Israel, but never has the evangelical theology of Christian Zionism been so close to the policymaking apparatus of the executive branch. By identifying with Christian Zionism while in office, Pence risks the Trump administration’s ongoing search for an ‘ultimate deal’ to solve the Israeli-Palestinian conflict and erodes the US’s claim that it can be an ‘honest broker’ in the Middle East.” (see Dan Hummel, “What you need to know about Mike Pence’s speech to Christians United for Israel“, Washington Post, 17 July 2017).

Christian Zionism has a long history in American politics, but it has never captured the bully pulpit of the White House – until now.

The Christian Zionist worldview is thus at the heart of the Trump administration’s approach to Israel. Its importance is bolstered by the need to encourage this valuable portion of Trump’s electoral support (which as opinion-polls, and the remarkable Senate election result in Alabama, suggest is shrinking).

This whole issue also arrives at a time when what is becoming known as the “Israel Victory” political caucus is gathering influence in Congress. This caucus, which has plenty of support in Netanyahu’s government, takes a simple, binary view: Israel has won, the Palestinians have lost – and really had better get used to living in a Jewish state. This hubristic outlook may cause anger and dismay among many Jews in the United States and western Europe, but it is a driving force within the Trump administration, which pays little more than lip-service to a two-state solution. Perhaps most significant of all, it fits almost perfectly into the Christian Zionist vision.

Christian Zionism and Mike Pence’s role in it are vital to any serious explanation of the political context of Trump’s declaration on Jerusalem. It is also worth reflecting that Trump’s departure before the end of his first term would mean a Pence presidency. That would be warmly welcomed by Binyamin Netanyahu and the tens of millions of Christian Zionists. In political terms the outcome could well be a leadership more astute and functional than at present. But as far as Israel and the Middle East are concerned, the dangers already sparked by the Jerusalem decision would increase yet further.