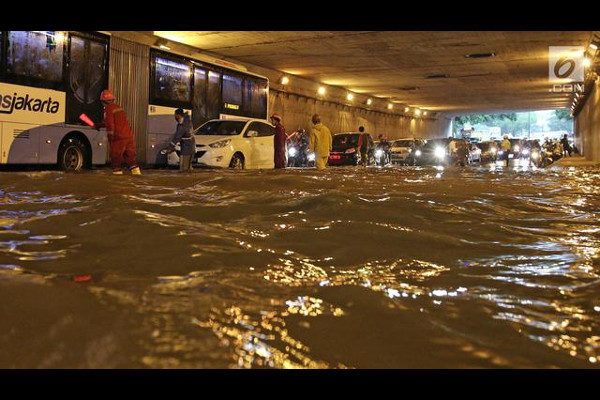 “I have communicated and directly checked the scenes. The problem is that parts of the small canals are obstructed by ongoing projects like MRT, LRT, and so on,” said Jakarta Governor Anies Baswedan, referring to the mass rapid transit and light rail transit, respectively.

If his administration delays the projects’ development, it could mean traffic-choked Jakarta will be even less navigable than before.

Jakarta, like many megacities that grew rapidly in the 20th century, has notoriously bad traffic. About 3.5 million people commute to work in the capital every day, sitting in multiple hours of traffic each way. Only about 56 percent of them use public transportation.

The “road coverage” of Jakarta is very low: about 8-9 percent, which means that percent of the developed land is dedicated to roads and alleys. In contrast, it is twice that in Tokyo and four times that in New York. Jakarta has lagged behind other large Southeast Asian cities such as Manila, Bangkok and Kuala Lumpur in developing a metro.

The groundbreaking for the MRT started in 2013, and the first segment, which runs from South Jakarta to the Hotel Indonesia Roundabout in Central Jakarta, is scheduled to open in March 2019.

The path of construction included major thoroughfares like Sudirman Road (Jalan Sudirman) that were flooded with almost 50 centimeters (19 inches) of water this week. The head of the Jakarta Water Resources Office, Teguh Hendarwan, claimed the construction constricted waterways, which he reported to the governor.

The MRT leadership has denied that the project is responsible for flood-related damage.

“We have made sure that what we are doing is in line with the environmental impact analysis from the beginning and we have also ensured that our drainage is always [properly] maintained,” Tubagus Hikmat, secretary of the MRT company, said Wednesday.

Beyond the soggy commuters, the low-income residents of the North Jakarta slums and neighborhoods are among those hit hardest by the rainy season.

Most live in poorly constructed homes and face not just heavy downpours, but also the worst effects of rising sea levels and subsidence, the slow process by which Jakarta is sinking into the ground.

“Four years ago, 90 percent of the district was flooded, and people’s homes and belongings destroyed,” Muhammed Andri, head of the Penjaringan district in northern Jakarta, told Reuters. “Since then we’ve relocated 1,200 families to new low-cost buildings in the area,” he added.

“The rainy season floods are actually better this year,” said Gugun Muhammad, an activist with the Jakarta-based Urban Poor Consortium. “Worse are the floods from the sea.”

“There are many causes of flood-related damage in Jakarta,” said Nila Ardhiani, director of the Amrta Institute for Water Literacy. “First of course is land subsidence … Jakarta just gets lower and lower each year.” The primary cause for this is overzealous groundwater extraction from millions of wells across the city, which is itself a reaction to the fact that Jakarta didn’t provide public water services until this year.

“Floods further aggravate the effects of subsidence,” said Ardhiani. “And of course there are management issues. The new administration should improve the maintenance of water pumps,” she said, as a starting point. In general, she said, new governor aside, most people involved with infrastructure are the same as before, so what they need is more directed management. “There needs to be control from the top-down to ensure we can deal with rain like what we had in recent days.”