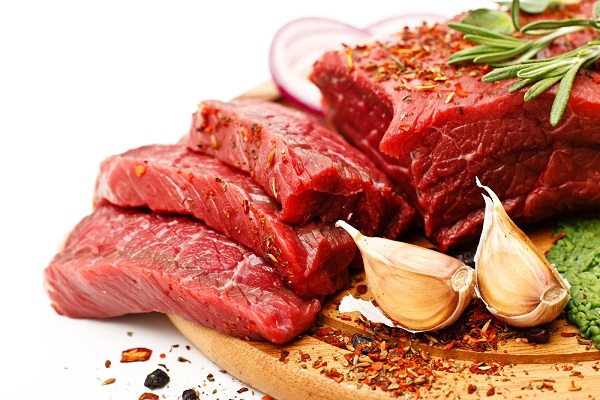 Mawlana Abd al-Hayy al-Lakhnawi (Allah have mercy on him) writes, “The incident of Rasulullah (Allah bless him with peace) sacrificing a cow on behalf of his wives during the Farewell Hajj and distributing its meat to his wives is recorded both in Sahih al-Muslim (#294) and Sahih al-Bukhari (#1709). I have not come across an explicit narration which mentions that Rasulullah (Allah bless him with peace) ate the meat of a cow.

Shaykh Abd al-Haqq Dehlawi (Allah have mercy on him) writes in Madārij An-Nubuwwat,

It is narrated from Ā’ishah (Allah be pleased with her) in Sahih al-Muslim that she said,

It is apparent from this narration that Rasulullah (Allah bless him with peace) himself ate the meat of the cow, and it is possible that he himself did not eat it but he gave it to his wives to eat. Allah knows best. (Majmū’a Fatāwā Mawlana Abd al-Hayy, p. 407)

There are authentic hadiths which mention that beef was served in the house of Rasulullah (Allah bless him with peace), and in all likelihood, he himself did eat from the beef, despite the fact that this is not explicitly mentioned in these narrations. The fact that he himself slaughtered a cow and brought its meat home shows that it is completely lawful to eat beef in itself.

Some narrations do seem to indicate that it is disliked to eat beef and there are medical harms in doing so. There is a hadith attributed to Rasulullah (Allah bless him with peace) regarding the consumption of beef. He is reported to have said, “You should hold fast to the milk of cows and clarified butter of cows, and you should avoid the meat of cows. The milk and clarified butter of cows is a source of medical treatment and a cure, while its meat is a source of sickness.” (Mustadrak al-Hākim)

Moreover, the narration of beef being a source of sickness goes against other authentic narrations, thus bringing its own authenticity into question. Hāfidh Zarkashi writes that there are authentic narrations which establish that Rasulullah (Allah bless him with peace) sacrificed a cow for his family, and he would not make a sacrifice of such an animal whose meat is known to cause sickness to others. (Faydh al-Qadīr, vol.4, p.444)

Some scholars of hadith have also provided an alternative interpretation to the narrations which state that beef is a source of sickness. The specialists in Unani (Greek) medicine and Tibb analyze the effects that climate, season, and type of food have on the health of an individual. Many scholars of hadith quote Imām Halimi’s interpretation of this narration and agree with his medical analysis from Unani Tibb. Imam Halimi mentions that this narration regarding medical harms of beef cows are particularly serious for the region of the Arabian Peninsula as compared to other regions, and it is as if he has restricted the scope of this hadith to beef in the Arabian Peninsula. The reason is that beef is both dry and cold in terms of Unani Tibb. When this dryness is combined with the arid and dry climate of the Arabian Peninsula, then it will potentially have a severe adverse effect on the person who eats beef. (Faidh al-Qadīr, vol.4, p.444).

In light of this explanation, the negative health effects of eating beef mentioned in this narration will be restricted to the Arabian Peninsula.

In summary, we can say in light of the authentic narrations that it is permissible to consume beef and there is no harm in doing so, especially for people living outside of the Arabian Peninsula. There is a good chance that Rasulullah (Allah bless him with peace) himself ate beef on multiple occasions, as asserted by Allāmah Anwar Shah Kashmīrī. However, in light of the weak narration emphasizing the adverse health effects of eating beef and the numerous modern-day medical studies highlighting the medical harms of eating beef, it would be best to eat beef sparingly and in moderation. A detailed analysis of the hadith narrations quoted in this fatwa in Arabic may be found at the end of the original article.