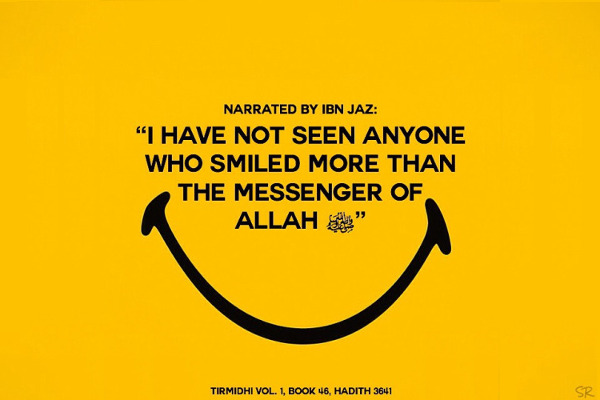 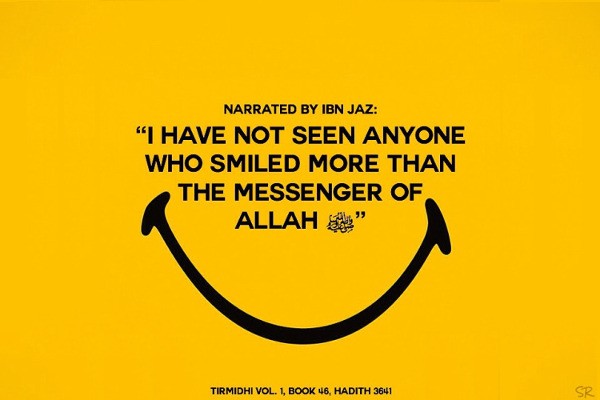 A smile is an instant message to those we know as well as those we do not know. It is received and understood even before we speak to or greet someone.

You feel a happy emotion, the corners of your mouth turn up, your cheeks lift and your eyes crinkle.

Easy, however the overall effect tells the outside world that we’re feeling happy on the inside.

It’s simple and, in most cases, totally spontaneous and in fact can be contagious.

Think about it. It is no surprise that in Islam much attention is paid on how we, as Muslims, carry ourselves and present our religion and the simplest way is to smile.

In fact the Prophet Muhammad (peace be upon him) was the best example in terms of smiling and making others happy:

“When you smile to your brother’s face, it is charity,” he often told his companions.

“I have never seen anyone more in the habit of smiling than the Messenger.” (At-Tirmidhi, 3641)

Another companion relays that:

“Whenever the Prophet saw me after I had embraced Islam; he would receive me with a smile. I have never seen anyone who smiles more than the Prophet.” (Al-Bukhari, 117)

With the nature of our lives these days, just by turning on the TV or reading the paper or surfing the internet, smiling may seem quite a difficult adventure. However smiling is viewed across cultures as a sign of friendliness and it is a natural response that shares our happiness with others.

The Healthy Side of Smiling

Smiling and laughter therefore are useful aids in health care. Still in the area of health, smiling boosts the immune system by relaxing the body and allows the immune system to react more quickly and effectively to invaders. Moreover it has been proven that it increases productivity and here’s a good one for our female readers, it makes us look younger!

Teach the Art of Smiling

My daughter says it was her dad who made her love mosques and love Islam. It was his smile……….
He would persuade the parents to bring their children to the mosque and assigned a place for the younger ones to pray making them feel special installing a smaller version of the stand where the imam would stand and decorating their prayer area with posters encouraging them to keep the place clean.

For me visits to the mosque as a youngster were a delight and equally so my children enjoyed their visits. My husband would encourage our children, both boys and girls, to do the same as the ‘big’ people, and yes they would smile in between prayers.

My daughter, now a mother, recalls how her father would smile at her rather than rebuke her when she would have enough of praying and do headstands or run round the pole. It goes without saying he would sit in the last row.

Of course parents should be mindful of others at the mosque and not give their kids free roam to wreak havoc during prayer services. But if a kid babbles during the prayer while everyone is silent, honestly what is the harm?

My daughter says it was her dad who made her love mosques and love Islam. It was his smile. Now her son sits on her head when she prays (after all what goes round comes round) and, in turn, she smiles to him when she finishes, teaching him slowly in the process.

Smiling forces us to remove any anger or harshness from our heart, as Allah says in the Quran:

{And if you had been rude in speech and harsh in heart, they would have disbanded from about you.} (3:159)

A Sunnah and Way of Life

There are several studies demonstrating that people are happier when they smile………..
How many of us have walked down the street, seen someone smile and smiled back thinking it was for us? Embarrassing yes, but I, for one, continue smiling after realizing the initial smile was not for me and garner happier smiley people in the process.

As mentioned above smiling is contagious, therefore as you are gaining all these benefits you are spreading them around to all those who see you smiling and smile back. Remember, a smile conveys confidence and professionalism.

Do people ever tell you to “just smile, you’ll feel better”?

If you’re like most teenagers you may hear it a lot, and you get annoyed every time you hear it. (Telling a teenager to smile is probably one of the best ways to ensure they won’t smile for the next several hours). But the notion that smiling will make you feel better has actually been confirmed by research.

There are several studies demonstrating that people are happier when they smile, at least in certain circumstances. It is no wonder Islam focuses on it. Our beautiful religion teaches that a smile is a message about ourselves as Muslims; that our heart is pure and that we are not infected by anxieties, hang-ups, and gloom.

A smile is an instant message to those we know as well as those we do not know. It is received and understood even before we speak to or greet someone, and makes that person more receptive to what we have to say.

That said we must realize though before we all go out with renewed vigor for smiling and laughing with friends and family there are just a few small points to remember.

Islam is the middle way, we have a religion that should be known for its moderation, thus laughing and joking relentlessly is not the best way to behave.  Remember that although Prophet Muhammad laughed and joked with his family and companions, he always behaved sensibly with fine moral principles. He never joked in a way that hurt someone’s feelings or joked or made people smile about things that were not true. In fact he was heard to say:

Bear in mind for something to be funny or make us smile it cannot be mean, hurtful or condescending. After all, Prophet Muhammad taught us that the smile is a gift of joy; an emotional gift, not a material one – a gift whose substance is received by the heart.

He taught us to apply a smile to every occasion where a smile can bring cheer, lighten the mood, or reduce the stress that people are feeling.

So how about we let down our guard and smile?

Your smile may be worth much more than what you think.