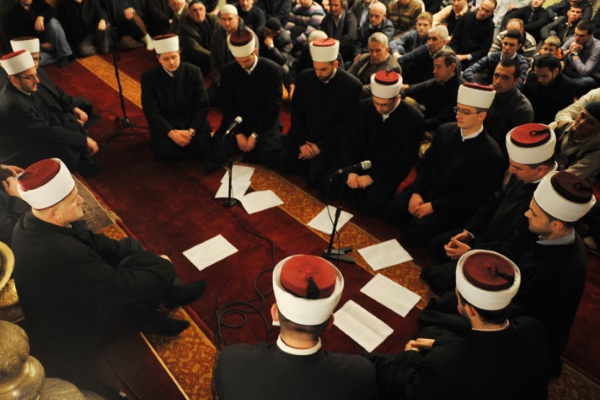 An grave falsehood that some opponents of Mawlid propagate is the claim that some ignorant people from India and Pakistan of the last few decades have invented the celebrations of Mawlid an-Nabawi Sharif being influenced by the Hindu religion and culture.

They imply that Mawlid was never ever celebrated before in previous ages. So here are some glimpses of facts from actual Islamic history.

“The people of Madina Munawwarah (May ALLLAH have Mercy on them) used to arrange and attend mawlid gatherings with great enthusiasm and sincerity on the occasion of Mawlid Sharif.” [Mawrid ar-Rawi Fi Mawlid an-Nabawi, Page 29]

“People of Haramain Shareefain (Makkah and Madinah) and Egypt and Yemen and Syria and of the eastern and western cities of Arabia hold functions in celebration of the birth of the Prophet (ﷺ), they rejoice at the sighting of the moon of Rabi al-Awwal, bathe and put on their best dresses adorn themselves in various ways, put on scent, and give alms with great joy, and exert themselves in listening to the Mawlid of the Prophet (ﷺ). By doing so, they themselves attain to success, as it has been proved that by celebrating the Mawlid of the Prophet (ﷺ) much good accrues the whole year round, security and comfort, greater means of livelihood, increase in children and in wealth, peace in cities and contentment and peace in homes.”

4) According to “Tarikh-e-Mar’at az-Zaman” millions of rupees were spent on those festivities. In the beginning of 7th Century of Hijri Calendar a great Scholar named Abul Khattab Umer Bin Hasan dah’hia Qalbi Andalusi Balansi wrote a book on the topic Milad an-Nabi (ﷺ) named “At-Tanveer Fi Mawlid as-Siraj al-Muneer”. In 1207, He went to Sultan Arbal’s castle and presented his book on Mawlid to him, for which he was awarded a thousand gold coins from the Sultan. This was the status and respect of Mawlid Shareef in hearts of earlier leaders of Islam.

5) Not only Sultan Arbal, but the King of the lands of Egypt also celebrated the Mawlid Shareef. Allama Ibne Juzri (رضي الله عنه) is one the eyewitnesses. For the celebration of this festival 1000 mithqal of gold was spent on it. Sultan Abu Hamu Musa Talamsani and earlier rulers of Aqsa and Andalus used to Celebrate Mawlid an-Nabi (ﷺ). Abdullah Tonsi Summa Talamsani has written the details of these festivals in his book “Raah al-Arwah”.

6) It is stated in Seerah al-Halabiya that:

“Muslims have been celebrating gatherings of Mawlid Sharif in large cities for some time.” [Seerah al-Halabiyah, Page 80]

“Dwellers of Makkah visits Birthplace of Prophet (peace be upon him) on the eve of Mawlid an-Nabawi every year and arrange enormous gatherings.” [Jawahir al-BiHar, Page 122]

8) In “Fuyudh al-Haramain”, Shah Waliullah has pointed out:

“The birth of the Prophet (ﷺ) was celebrated by the people of Makkah who received blessings on account of it.”

On the eve of Mawlid an-Nabi (ﷺ) celebrations are observed in Makkah and dwellers of Makkah name this day as Youm al-Eid Mawlid ar-Rasoolullah (ﷺ). People use to cook food. The Ameer of Makkah and Commander of Hijaz with their army use to visit birthplace of Prophet Peace be Upon Him and recites Qasida there. Rows of shining candles are positioned from Haram al-Makki to Birthplace and Shops and Houses on the way are also decorated. People use to recite Qasaid whole day at the birthplace. On the night of 11th Rabi al-Awwal after Isha, Mawlid Gathering is organized. From Maghrib prayer of 11th Rabi al Awwal to Asar Prayer of 12th Rabi al Awwal, after every prayer Salutations of 21 tanks is presented.
References:

“On the Eve of Mawlid an-Nabi; whole Islamic world is observed to be delight and celebrating it. And it is celebrated till now with enthusiasm and integrity. [Encyclopedia of Islam, Vol. 21, Page 824, Published By: Punjab University, Lahore]

“In the Haramayn (i.e. Makkah Mukarrama and Madina Munawwarah), in Egypt, Yemen rather all people of Arab world have been celebrating Mawlid for some time. Upon the sighting of the moon in Rabi ul Awwal their happiness touches the limits and hence they make specific gatherings for Dhikr of Mawlid due to which they earn immense ajr and success. [Bayan al-Mawlid an-Nabwi, Page 58]

12) Shah Waliullah Dhelvi mentions one of his all-time wonderful experiences as:

“I took part in a gathering of Mawlid inside Makkah where people were sending Darood and Salam upon Prophet (Peace be upon him) and commemorating the incidents which took place during the time of the blessed birth (before and after) and those which were witnessed before he was appointed as a Nabi (such as Noor eliminating from Bibi Amina (رضي الله عنها), her seeing the Noor, a woman proposing to Sayyiduna Abdullah (رضي الله عنه) on sighting the Noor on his forehead, etc.) suddenly I saw Noor enveloped one group of people, I don’t claim that I saw this with my bodily eyes, nor do I claim that it was spiritual and Allah knows the best regarding these two, however upon concentration on these Anwaar a reality opened upon me that these Anwaar are of those Angels who take part in such gatherings, I also saw Mercy to be descending along with the Anwaar of Angels.” [Fuyudh al-Haramayn, Pages 80/81]

“The gatherings of Mawlid and Adhkaar which take place during our time, they are mostly confined to good deeds, for example in them, Sadaqat are given, Dhikr is done, Darud and Salam is sent upon the Prophet ((ﷺ)) and he is praised.” [Fatawa al-Hadithiyyah, Page 202]

“Pious pilgrims and prominent travelers testified that, on the day of the Mawlid Shareef in Makkah al-Mukarrama, no activities are undertaken, and nothing is sold or bought, except by the people who are busy visiting the noble birthplace, and rush to it. On this day, the Holy Ka’abah is opened and visited.”

15) The famous eighth-century historian, Ibn Battuta relates in his Rihla that:

“Each year on the twelfth of Rabi al-Awwal Shareef, after Maghrib Salah, the four Qadhis of Makkah al-Mukarrma (representing the Four Sunni Schools) and large groups of people including the jurists and notables of Makkah al-Mukarrma, Shaykhayn, Zawiya teachers and students, magistrates and scholars, leave the Mosque and set out collectively for a visit to the Noble Birthplace of the Beloved Prophet Alaihes Salato Salaam, shouting out Dhikr and Tahlil.

The houses on the route are illuminated with numerous lanterns and large candles, and a great many people are out and about. They all wear special clothes and they take their children with them.

Inside the Noble Birthplace, a special sermon for the occasion of the birthday of the Beloved Prophet (ﷺ) is delivered. Hereafter the Dua’ for the (Ottoman) Sultan, the Ameer of Makkah al-Mukarrma, and the Shafi’i Qadhi are done and all pray humbly.

Shortly before the ‘Isha prayer, the whole party returns to the Great Mosque, which is almost overcrowded, and sits down in rows at the foot of Maqam Ibrahim.”
A similar description is given by Shaykh al-Diyar Bakri (d/960) in his Great Sirah entitled Ta’rikh al-Khamis fi Akhbari Anfasi Nafis.

All good is from Allah Most High whereas mistakes are from this humble speck. May Allah Most High bless all readers, bringing you all closer to Him and His Beloved Prophet (ﷺ). May He accept our humble efforts and grant us the capacity to be good and do well. Ameen!