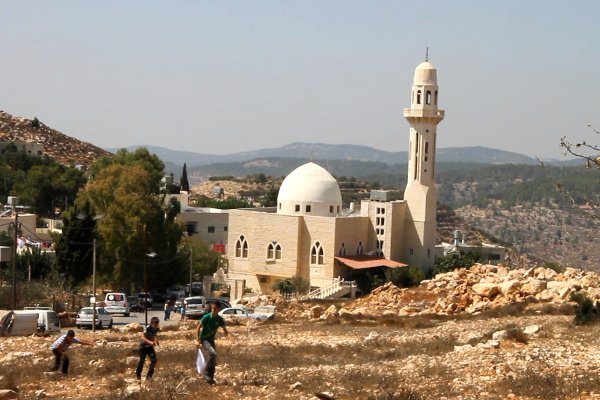 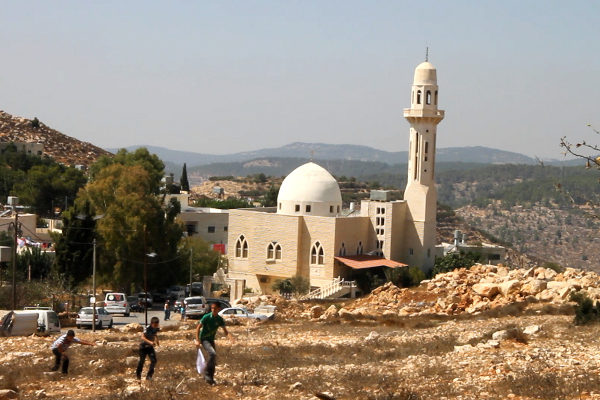 AL-WALAJA, Occupied West Bank – Lush green hills surround al-Walaja, an agricultural terrain cultivated by locals for millennia that provides a respite from the typically arid landscape of much of the occupied West Bank. While residents of the small Palestinian village have long fought to preserve sovereignty over their lands, the Israeli government has other plans.

Earlier this week, Israeli authorities informed al-Walaja that they were moving forward with a plan to move the permanent military checkpoint closer to the village, several hundred metres further into the West Bank.

While at first glance it might seem benign, the move would effectively cut off al-Walaja residents from some 1,200 dunams (296.5 acres) of land belonging to it and incorporate it into the planned Jerusalem Metropolitan Park, a move which locals and activists have denounced as the latest instance of Israeli annexation of Palestinian land.

“Moving a checkpoint on its own doesn’t make sense unless you understand the overall strategy of a colonisation system that involves ethnic cleansing,” Mazen Qumsiyeh, a professor at Bethlehem University, told Middle East Eye.

“Al-Walaja is a microcosm of what is happening in Palestine as a whole,” the academic said. “All aspects and symptoms of colonialism, the various ramifications of colonisation, can be found in this one village.”

Squeezed between the illegal Israeli separation wall and the illegal settlements of Gilo, Har Gilo, and Gush Etzion, with only one road connecting the village to the rest of the West Bank, al-Walaja has been targeted by land confiscation policies since the establishment of the state of Israel.

According to the UN, al-Walaja has lost more than 85 percent of its lands since 1948, while 90 percent of the residents of the village and their descendants were forced out, many of them ending up in nearby refugee camps, unable to return to their hometown despite it being in the West Bank.

For Aviv Tatarsky, a researcher for Israeli NGO Ir Amim, the decision to open a national park in the area between East Jerusalem and the cluster of settlements surrounding al-Walaja is a strategic “plunder” by Israeli authorities to encompass those settlements within plans for a “Greater Jerusalem”.

“You can speak about nature, heritage, and tourism at the national park, things that sound very innocent and non-political, but it basically is a transparent settlement,” he told MEE.

“Israelis are going to have fun in the park while the landowners are dozens of metres away, on the other side of a barbed wire fence,” Tatarsky said. “It’s cruel and inhuman.”

According to Israeli law, Tatarsky said, lands in the Jerusalem area do not need to be expropriated to be included within a national park – in fact, al-Walaja’s ownership of the lands was not disputed by the planning committee for the park.

However, the move to include more of the village’s lands within the borders of East Jerusalem, preventing its owners from accessing it, means that Israel could rule down the line that the land has been abandoned under the Absentee Property Law and declare it state land – even though the landowners remain in al-Walaja.

Tatarsky said that the move to confiscate unpopulated lands, coupled with pushes to exclude Palestinian-majority neighbourhoods from Jerusalem municipal boundaries, was all part of a longstanding Israeli policy of seizing “maximum land with minimum Palestinians”.

The move to relocate the Ein Yael checkpoint would effectively confiscate the spring of Ein al-Haniyeh, one of the last remaining water sources in al-Walaja, and a popular recreational area for locals.

The expansion of the park would also cut off residents from its treasured agricultural stone terraces. The ancient farming practice dating back thousands of years has been preserved by Palestinians in al-Walaja and the nearby valley of Battir – where the terraces were inscribed on UNESCO’s World Heritage List in 2014.

The Israel Antiquities Authority and Jerusalem Development Authority in charge of the park have promoted the terraces as Jewish historical structures, a move that Qumsiyeh said fell in line with Judaisation efforts in the occupied Palestinian territory.

“In the context of colonisation, Israel comes up with all sorts of mythologies to justify what it does,” he said, adding that several Israeli archaeologists, such as Israel Finkelstein, have acknowledged Israel’s efforts to “forge history to fit a Biblical narrative”.

“It’s very hurtful. They don’t just steal the land, they steal it and then change its identity too,” Mustafa al-Araj, whose family is originally from al-Walaja, told MEE.

“As a refugee from this village, I always had a dream of going back to al-Walaja and building a house on my grandfather’s land. But nowadays I am scared,” al-Araj said, adding that the recent land grab came on the heels of at least 50 demolition orders being issued on homes in the village in the span of three months.

While the notices handed out by the Israeli army gave al-Walaja residents two weeks to appeal the decision, Tatarsky expressed little hope that legal action could be successful, pointing out that lawsuits in 2010 and 2013 failed to stop the construction of the separation wall on al-Walaja lands.

“Legal strategies against these policies have time and again proven to be ineffective. Israeli courts are part of the system, Israeli politicians are powerful enough to limit the ability of the courts to act,” he said. “We need to develop new strategies, real resistance, real pressure. There cannot be an illusion or expectation that the system itself will provide justice.”