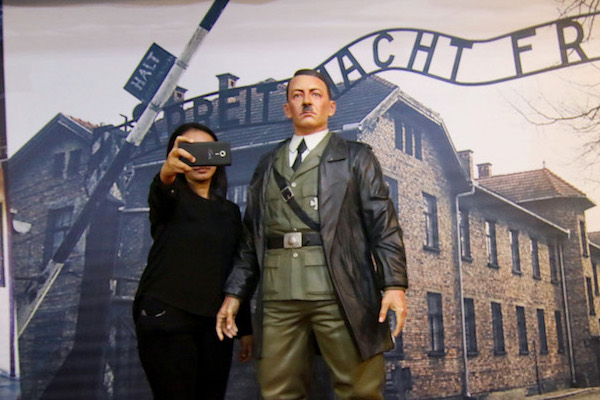 This photograph taken on November 10, 2017 shows an Indonesian woman take a selfie with a life-size wax sculpture of Adolf Hitler at a museum in Yogyakarta. An Indonesian museum that allowed visitors to take selfies with a life-size wax sculpture of Hitler against a backdrop of Auschwitz concentration camp has removed the exhibit following international outrage, the manager said on November 11. / AFP PHOTO / HENRYANTO (Photo credit should read HENRYANTO/AFP/Getty Images)

For a few rupiah, visitors to Yogyakarta can snap photos of themselves in ready-made optical illusions, or recreated scenes from history and fantasy. If their selfie arms are still functioning, nearly 200 life-size figures of history’s most famous people await, ready to amuse Facebook friends and distant relatives.

Darth Vader’s popular; so is a one-time Indonesia resident named Barack Obama. “We give you the best place to take your pict,” the museum proudly boasts on its website.

But bowing to international outrage, the museum has removed one historical wax figure from its menagerie of selfie-ready celebrity statues: Adolf Hitler.

Particularly, a gallantly posed fuhrer standing in front of a backdrop of the Auschwitz concentration camp. The picture, seen in an uncountable number of selfies with De MATA’s grinning visitors, contains the infamous sign above the camp’s front gate: “Arbeit Macht Frei” — “work sets you free.”

“Everything about it is wrong. It’s hard to find words for how contemptible it is,” Rabbi Abraham Cooper, associate dean of the Simon Wiesenthal Center, which campaigns against anti-Semitism and Holocaust denial, told the Associated Press. “The background is disgusting. It mocks the victims who went in and never came out.”

The outraged claimed the photo of Hitler had no business next to infotainment depictions of Steve Jobs and a leather-clad Scarlett Johannson. And, critics said, the pictures that flooded people’s social media accounts were an insult to the 6 million Jews who died in Hitler’s extermination camps.

Warli, the museum’s marketing officer, who goes by one name, defended the waxwork to the Associated Press. He said he knew Hitler was a historical figure responsible for mass murder. But since his statue went on display in 2014, the work was “one of the favorite figures for our visitors to take selfies with.”

“No visitors complained about it,” he said. “Most of our visitors are having fun because they know this is just an entertainment museum.”

The “just entertainment” aspect of similar depictions of Hitler and his Nazi regime is something that has vexed historians and activists for years. Some worry that distancing historical figures from their atrocities — essentially turning them into caricatures and cartoon characters — is the first step toward repeating the mistakes of the past.

In a Q&A with the Connecticut Jewish Ledger, Gavriel Rosenfeld, the author of “Hi Hitler!” warned that similar Hitler- and Nazi-based displays normalize the Nazi legacy:

The Internet above all is the medium that really focuses on Hitler as a completely decontextualized, dehistoricized figure. We can draw a Hitler mustache on anything or a swastika on anything and start laughing at it.

When Hitler himself is photoshopped into the form of various other characters, we get into some really bizarre phenomena: catsthatlooklikehitler.com or thingsthatlooklikehitler.comor “Hipster Hitler” or “Six Degrees of Hitler” — it’s a cottage industry of people exploiting his image to get attention but we’re far away from any historical lesson.

So-called Nazi-normalization has sparked an outcry before in Indonesia, which has the largest Muslim population in the world and a minuscule Jewish population.

A Nazi-themed cafe in the city of Bandung, where waiters wore replica SS uniforms, caused anger abroad for several years until reportedly closing its doors at the beginning of this year.

It was called the Soldatenkaffe, named after a restaurant in Paris that was popular with occupying Nazi soldiers. Hitler portraits and Nazi flags adorned the walls of the Indonesian restaurant.

The cafe’s owner, Henry Mulyana, insisted to the Daily Mail that he wasn’t a neo-Nazi and said on the cafe’s website that it explored “Hitler & the Nazis as pop culture.”

Even in De MATA’s case, the owner told the Associated Press they weren’t getting rid of the statue because of internalized sentiment that it was in poor taste, but because of the outcry.

“We will follow the best advice and the response from the public,” Warli said. “Let people judge whether the character is good or bad.”