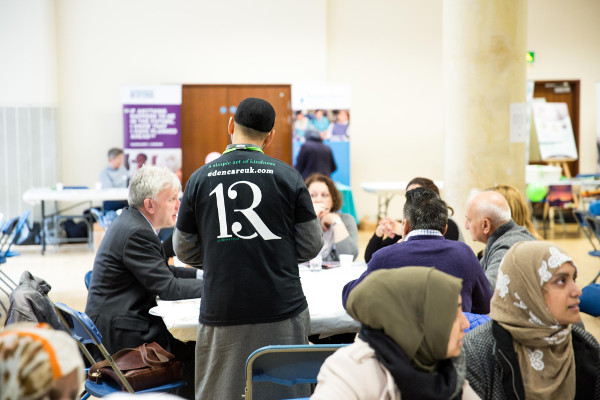 If the photos to the right of Abu Mumin are anything to go by, he saves his smiles for the people he is helping.

Although far from curt or impolite in his demeanour, his voice carries a seriousness that is matched in his expression and body language, rarely fidgeting or breaking eye contact.

Several pictures show him with a wide smile posing beside patients at their hospital beds.

The social worker from London is part of an organisation called Eden Care, which identifies terminally ill people who have no loved ones to look after them and sets about providing them with companionship towards the end of their lives.

As most of the people they work with are estranged from their families, their final weeks of life would otherwise be spent alone.

‘Muslims who ended up having Christian burials’

At the group’s office in the London borough of Tower Hamlets, Mumin sits on a small leather sofa besides a microwave box and a stack of documents and leaflets.

The walls of the room are plastered with photos of volunteers with the terminally ill people they work with and others depicting funeral proceedings.

“Our work involves intensive befriending,” he explains, continuing: “We spend the evenings with them to give them company, we take food, do activities, we read the Quran, and even take them on trips to places they can’t visit because of their physical disabilities.”

Most of the people Mumin and Eden Care help are Muslims, but the group also befriends people who are not. The organisation works with partners from other faiths to ensure those who are not Muslim have funeral arrangements according to their preferred rites.

Converts to Islam, who are often referred to as “reverts” by Muslims, are one of the key demographics that Eden Care works with, and Mumin voiced concern that they were more likely to face difficulties towards the end of their lives than people who were born into the faith.

“We get a lot of reverts who are often the only members of their families that are Muslim, so find themselves quite isolated and worried about what will happen when they die,” Mumin says, adding: “We have had Muslims who ended up having Christian burials, for example.”

In such cases, his role takes on a more educative and legal dimension, educating next of kin about Islamic burial procedures and drawing up the necessary paperwork to ensure the dying are buried according to their religious tradition.

“There have been cases where families insisted on a non-Muslim burial, but in others they have been very supportive because of the wishes of their relative,” he explains.

Mumin and the volunteers at Eden Care have helped bury 52 people since the organisation was established in late 2014, and have befriended many other terminally ill people.

The Londoner of Bangladeshi origin drew on his own experience looking after his late mother when she was diagnosed with a terminal illness in the late 1990s.

She was initially given six months to live, but went on to live a further 15 years after her diagnosis.

When she died, Mumin felt the absence not only of a loved one, but of the lifestyle he had grown accustomed to while caring for her.

“The day that my mum died, that part of me that I was doing before, I lost that,” he reflects, adding: “What gave me peace was helping her … A lot of the services [Eden Care offer] are reflective of our own experiences.”

But it’s not just his personal experiences with his mother that drive Mumin.

Religion plays an important role, too, especially Islam’s exhortations to look after the sick, and the communal requirement on Muslims to ensure that a fellow Muslim be buried according to Islamic rites.

“Both historically and today, a funeral remains a social obligation, what is defined as ‘fard kifayah’ in Islamic theology,” says Abdul Azim Ahmed, a researcher on contemporary Islam.

“Like births and marriages, death is something that affects the community, and the funeral in the Islamic tradition reaffirms that while we are all individuals, we belong to each other in both life and death,” he explains.

Death and illness therefore take on a social dimension for Muslims like Mumin, rather than being of concern only to a small circle of family and close friends.

That ethos of social obligation meant that Eden Care was well placed to respond during the recent Grenfell Tower tragedy.

Mumin and the group’s volunteers have helped bury 12 victims of the fire, with several more funerals planned. The organisation has offered its services to both Muslims and non-Muslims affected by the fire, which left at least 80 people dead.

There are also practical considerations driving the group’s work.

“By the year 2030, there’ll be a quarter of a million Muslims over the age of 65 … We need to concentrate on this issue of care,” Mumin says, citing figures by the charity, Hospice UK.

He warns that Muslims have been slow to respond to the growing need for care within the community and they need to act fast.

“We need to be more interested … This a multilevel issue, from graves, to care homes, to hospitals; we need to get thinking about how we’re responding,” Mumin says.

To that end, Eden Care has been working with London Muslim Centre, one of the largest mosques in the UK, to host awareness events about end of life care.

Despite satisfaction with the work he and Eden Care are doing, the toll of frequently burying people he has gotten to know over months and years has brought Mumin to the verge of quitting.

“When I got to the 30th burial, I said I can’t hack it any more … This is hard,” he says, explaining how he had decided to resign in the summer but reversed his decision after the Grenfell disaster.

“I’m a youth worker, not a burial person, so every time I used to go into one of these burials I used to come out feeling exhausted and I would cry,” he says.

Mumin is one of 30 people at Eden Care, the majority of whom are volunteers. Their work has earned deep respect from locals in London but he concedes that the scale of their work is relatively small and much more is needed.

“It’s a duty … but I just think we’re scratching the surface.”