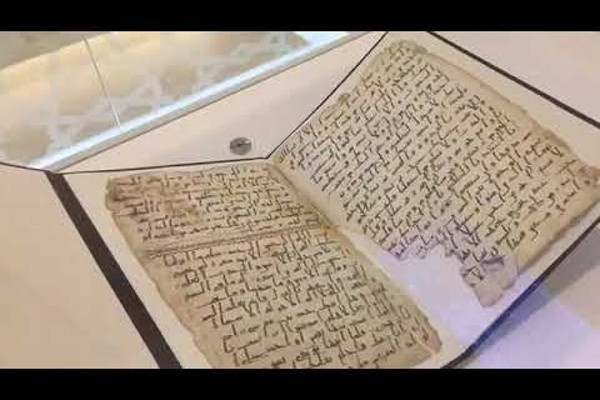 Sharjah: A rare chance to see a replica of one of the oldest manuscripts of the Quran — more than 1,350 years old — is drawing visitors to the Sharjah International Book Fair (SIBF).

On display at the UK’s University of Birmingham stand at the fair, the work is a copy of the original that has been carbon-dated to 468-645AD.

The origin of the four-page manuscript, which has been in the possession of the University of Birmingham since the 1930s, had not been properly determined until recently when a professor noticed that the binding appeared uniquely different from known vellum bindings of existing old manuscripts.

It was subsequently carbon dated and found to be at least more than 1,350 years old, with the fact that it had been written on animal skin as opposed to paper ensuring its longevity. The Hijazi script in the pages also ties in with this period, meaning that the handwriting matches this chronology.

In an interesting twist, the four pages of the University of Birmingham’s script correspond with four missing pages of a rare Quran script archived in Paris. The latter has not been subject to carbon dating, which could help verify whether the missing pages and the existing pages are one and the same.

At the Quran stand, located in Hall 5, there are also interactive touchscreens that allow visitors to explore the background, details and facts regarding the manuscript.

The University of Birmingham’s Quran script will be on display throughout the duration of the 11-day fair, which ends on November 11. This year’s edition of the world’s third largest book fair is witnessing the participation of 1,650 publishing houses from 60 countries. More than 1.5 million titles are on display at the event.