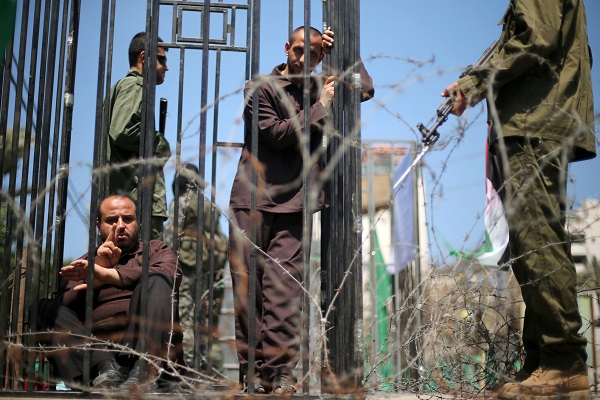 Men play the role of jailed Palestinians and Israeli soldiers during a rally in support of Palestinian prisoners on hunger strike in Israeli jails, in Gaza City April 17, 2017. REUTERS/Mohammed Salem

So now it’s time for us all to follow Theresa May’s bone-headed suggestion that we feel “proud” of the iniquitous Balfour Declaration on its hundredth anniversary this week. The Israelis will be celebrating – and why not, for it set Britain’s seal on the future Israeli state in Palestine. Perhaps Israel would not have been created without it. But the fearful suffering and tragedy of the Palestinian refugees which was to follow in the coming years suggest that the Balfour letter – through its very wording – was certain to create a terrible wrongdoing which to this day curses the place we used to call the Holy Land.

Even more disgraceful than May’s foolish words – for many Britons may well feel shame or prefer silence when they contemplate this episode of history – were Mark Regev’s remarks this week that citizens of the United Kingdom, to which he is currently accredited as ambassador – are “extremists” if they oppose the Balfour Declaration.

Thus, the man whose nauseous excuses for the slaughter in Gaza we had to put up with when he was an Israeli government spokesperson, continues that “those who oppose the Balfour Declaration are exposing themselves for the extremists they are. If you oppose a Jewish national home, that means you think Israel should be destroyed. And let’s be clear: that’s the position of the Iranian government; that’s the position of terrorist groups like Hezbollah and Hamas.”

So I get it. Instead of giving the Israeli ambassador a dressing down for such undiplomatic language towards her own citizens, May preferred to keep a cowardly silence while Israel’s ambassador told us what to think about the Balfour Declaration – and that if we didn’t agree with him, we were all extremists, terrorists, and therefore presumably antisemites, racists, Nazis, not to mention sympathisers of Hamas.

What gall this man has. Does Regev not even realise – as at least one Israeli journalist has pointed out – that the Balfour Declaration may itself have been, by extension, antisemitic? It followed only a few years after Britain passed laws specifically introduced to prevent further Jewish immigration to the UK from Russia and Eastern Europe. In 1917, we certainly wanted the support of the Jews of Europe and America in the First World War – but we preferred any Jewish immigrants to avoid dank London and head for sunny Palestine.

Yet let’s point out something right away. Israel – whether or not Balfour was its original foreign sponsor – exists, and will only disappear if it destroys itself (which its prime minister’s continued policy of thieving even more Arab land for Israeli colonists might ultimately bring about).

As one of Israel’s finest historians, now an Oxford scholar, has rightly pointed out, Israel’s existence might have been grossly unjust to the hundreds of thousands of Palestinians who lost their homes – now a diaspora of more than six million refugees – but it is legal and came into existence legally. It is internationally recognized – though its colonies in the West Bank are not – and it is a member of the United Nations and has diplomatic relations with 159 countries.

This, however, does not excuse Theresa May’s “pride”. Indeed, it was instructive to note that in her remarks, she placed Britain’s trade relations in front of the terrifying injustice done to the Palestinians. Of course she did. For she cares more about the results of Brexit than she cares about millions of refugees. This, remember, is the lady who held Donald Trump’s hand.

Here, for the record, is what she actually said about Balfour: “I am … pleased that good trade relations and other relations that we have with Israel we are building on and enhancing. We must also be conscious of the sensitivities that some people do have about the Balfour Declaration and we recognise that there is more work to be done. We remain committed to the two-state solution in relation to Israel and the Palestinians.” And that is about as disgraceful as the Balfour Declaration itself.

So let’s remember what this document actually said in 1917: “His Majesty’s government view with favour the establishment in Palestine of a national home for the Jewish people, and will use their best endeavours to facilitate the achievement of this object, it being clearly understood that nothing shall be done which may prejudice the civil and religious rights of existing non-Jewish communities in Palestine, or the rights and political status enjoyed by Jews in any other country.”

The obvious lie in this single sentence – a charter for “refugeedom” if ever there was one – is that while Britain would support a Jewish “homeland”, the majority of the population (700,000 Arabs as opposed to 60,000 Jews, according to Hanan Ashrawi) are not regarded as having a “homeland” at all – but merely referred to as “existing non-Jewish communities”. They are not even called Arabs or Muslims – which most of them were – but as just “communities” which “exist”. And which of course might be persuaded one day to exist somewhere else.

We can forget that Balfour and his chums admitted within months that they didn’t intend to give the Arabs any attention. They certainly didn’t get any. Within just over 30 years, Israel itself was created and the Palestinian tragedy began. And in this, Theresa May takes “pride”.

I did particularly enjoy those “sensitivities” she referred to. Not, presumably, the “sensitivities” of the Palestinian refugees, but perhaps a few Tory MPs and, I suppose poor Jeremy Corbyn who’s getting his usual whipping, this time for not attending the Balfour Declaration formal dinner in London. If only he could be as forthright as this over Brexit and denounce the whole shambles of leaving the EU – but alas, he’s more worried about his Labour constituencies.

Anyway, for May, there is “more work to be done” and she still supports a two-state solution. More “work” to do? When the occupied Arab West Bank is still being concreted over? When any sane person realises that the “peace process” has collapsed?

This is a tragedy, of course, for Israelis as well as Palestinians. Israel’s achievement is that it has stayed alive – with massive and uncritical support and subventions from the United States, to be sure – and actually does exist as a state. But without peace with its neighbours and an end to Jewish colonisation of other people’s land, and without a Palestinian state – which alas, I suspect will never exist – Israel will always be at war, always live in fear and always have enemies. But there you go.

Feel plenty of “pride” like Theresa. And if you don’t, consider yourself a Nazi.