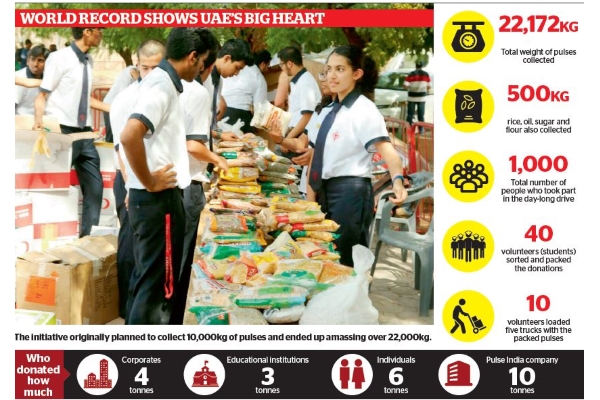 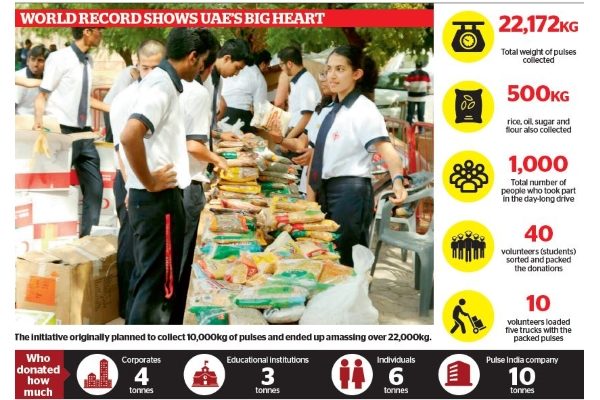 Over 1,000 people from across the UAE poured their heart out for those in need by collecting 22,172kg of pulses and lentils for refugees /relief support in one day at the Etisalat Academy in Dubai. The charity collection has once again registered Dubai’s name in the world record books for becoming the world’s largest collection of pulses/beans on a single day.

In line with the UAE’s Year of Giving initiative, about 80 volunteers, including 50 students, devoted one full day (9am to 6pm) from their weekend  (Friday) to collect, pack, sort and load the pulses and legumes to be distributed by the Emirates Red Crescent to people trapped in conflict zones such as Syria, Yemen, Somalia and other countries hit by natural disasters.

“Numbers are not important, but it is the participation of so many people, especially students, that was touching. Be it one kg or 1,000kg, what matters is the spirit of joyful giving that brought people of all age groups and nationalities together for a noble cause,” said philanthropist Venkat Krishnamoorthy, who was one of the organisers of the event.

The massive one-day charity drive was organised by the Emirates Red Crescent, in partnership with the UAE-based South Indian radio channel Tamil 89.4 FM and Venkat Krishnamoorthy.

The initiative originally planned to collect 10,000kg of pulses, but ended up with amassing over 22,000kg with an overwhelming response from corporates, students and individuals who learnt about the drive through the radio channel, social and print media.

All the proceeds were handed over to the Emirates Red Crescent in Dubai for further distribution to the needy across the world.

Appreciating the generosity of the people of the UAE, Mohammed Abdullah Alhaj Al Zaroni, manager of the Emirates Red Crescent Dubai, said: “The UAE is a role model for humanity.”

Adithya Sarma of Our Own High School, Al Warqa’a, said he took the initiative to contribute 31.5kg of pulses individually. He has contributed 6kg of wheat flour (not a part of this drive still) from his small savings while his younger brother Amit Sarma contributed 2kg of pulses for the campaign.

The large-scale collection drive that coincided with Tamil 89.4 FM’s Deepavali Kondattam also comprised of fun-filled games and entertainment from morning till late in the evening.

Sona Ram, managing director, Tamil 89.4 FM, thanked the public and listeners of the radio channel for their support in making the drive a huge success. He encouraged the public to take part in more acts of this sort and also thanked the dignitaries of the Emirates Red Crescent and Venkat Krishnamoorthy for their guidance throughout the drive.