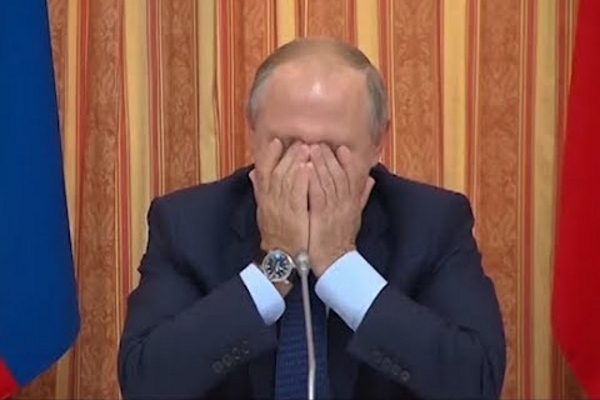 Russia’s agriculture minister unwittingly caused Vladimir Putin to break down in laughter with his idea for pork exports to Indonesia, a Muslim country, The Telegraph said.

Video of Putin’s giggles quickly went viral: The original tweet with the footage was retweeted more than a thousand times, local media covered the incident and uploads on YouTube got hundreds of thousands of views.

Minister Alexander Tkachyov was presenting a dry report at a meeting about agricultural development when he put his foot in his mouth, to the merriment of Putin and other high-ranking officials. Tkachyov had been arguing that Russia should follow Germany’s example and increase pork exports to Asia.

“Let’s say Germany produces 5.5 million tonnes of pork a year, 3 million of that is exported. To all countries, and first of all China, Indonesia, part to Japan, Korea and so on,” Tkachyov said.

He continued talking about growing pork production in the far east, but had to stop speaking when he noticed the president’s bemusement.

“Okay, South Korea,” Tkachyov responded and tried to carry on with his report despite the titters in the room.

“What’s the difference?” the exasperated agricultural minister said a few seconds later as the staid meeting broke down into guffaws. Putin was laughing so hard he had to cover his face with his hands.

The president keeps a serious demeanor at most official meetings, but he’s also known for a cutting sense of humour and the occasional salty joke.

At a question-and-answer session in June moderated by American journalist Megyn Kelly, Putin drew laughs from the audience arguing that US allegations of Russian interference in the 2016 election were “some kind of hysteria”.