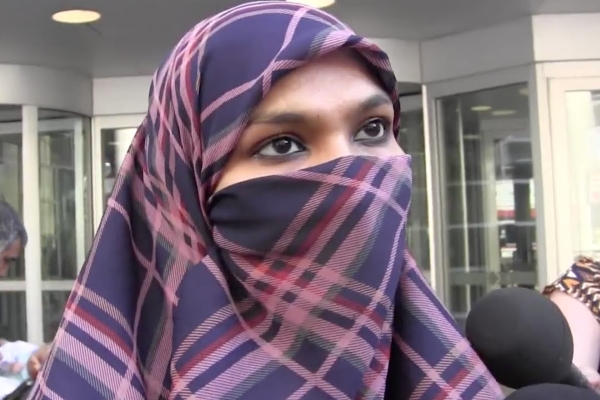 Zunera Ishaq of Mississauga, Ont., fought to wear a niqab while taking her citizenship oath.

Muslim women in Quebec who wear a burka or niqab could soon be required to uncover their faces to ride a city bus under a proposed provincial law.

The Couillard government’s Bill 62 on religious neutrality could be put to a vote as early as Tuesday, two years after it was tabled.

The controversial legislation would effectively ban public workers — including doctors, nurses, teachers and daycare workers — as well as those receiving a service from the government, from wearing the niqab, burka or any other face covering.

Amendments introduced in August extended the proposed rules to services offered by municipalities, including public transit.

“As long as the service is being rendered, the face should be uncovered,” Quebec Justice Minister Stéphanie Vallée said Monday in an interview with Daybreak host Mike Finnerty.

“This is a bill about le vivre ensemble [living together in harmony], it’s a bill about guidelines and clearly establishes neutrality of the state.”

Once the bill is passed, the province will work with municipalities, schools and public daycares to “establish clear guidelines,” she said.

Vallée said the law would be the first of its kind in North America.

The bill has been subject to criticism from those who contend it unfairly targets Muslim women, while the two main opposition parties, the Parti Québécois and Coalition Avenir Québec, have argued it doesn’t go far enough.

The Liberals hold a majority of seats at Quebec’s National Assembly.

There remains confusion about how exactly the proposed law would work.

Under the legislation, an exemption is possible if there is a “serious” request for accommodation on religious grounds.

However, Lucie Lamarche of Quebec’s Ligue des droits et libertés said it’s unclear how the term “serious” will be defined by the province and how such an exemption would work.

The law, she said, would put the burden on someone asking for an exemption when, for instance, getting a driver’s licence or a bus ticket.

“The management of the [law] is a bit hard to figure out,” said Lamarche, a law professor at the University of Quebec in Montreal, adding that the guidelines will inevitably be open to interpretation.

Those guidelines may not be in place until next June.

“As we know, there are many different opinions about the role of the state and the principle of state neutrality in Quebec. So it’s hard to believe that those guidelines by themselves won’t produce discrimination.”

Not a ban on religious symbols, Vallée says

The bill, Vallée said, is unlike the PQ’s failed values charter in that it doesn’t target religious symbols. The law would also apply, for instance, to masked protesters.

“We’re talking about having the face uncovered. It’s not what is covering the face,” she said.

Shaheen Ashraf, a board member of the Canadian Council of Muslim Women in Montreal, disputed that assertion.

Ashraf said the bill clearly targets Muslim women and will lead to their further marginalization in Quebec society.

“For me, neutrality would be everyone believes what they want to,” she said.

With files from Angelica Montgomery and Daybreak’s Cecilia MacCarthur