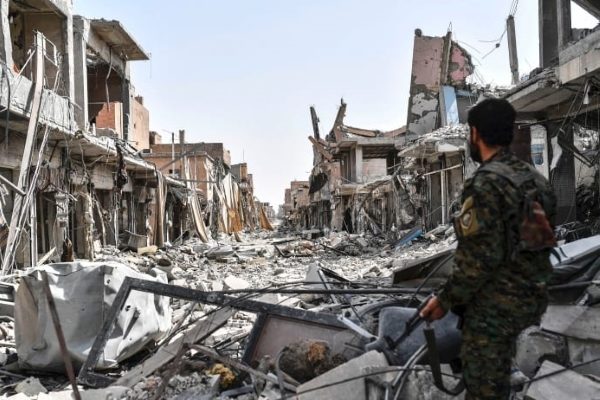 Syrian fighters from the ISIS group have left Raqqa, with preparations underway for foreign combatants to leave, a monitoring group said on Saturday.

Dozens of militants had left with their families and head to unknown destinations, the Britain-based Syrian Observatory for Human Rights told AFP.

While civilians will be evacuated en masse from the former ISIS stronghold as a US-backed force battles to seize the ISIS group’s last positions there.

The US-led coalition against the ISIS said the evacuation deal was designed to avoid any civilian casualties as ISIS militants cede further territory.

“All Syrian fighters from the ISIS group left Raqqa over the past five days,” said Observatory head Rami Abdel Rahman, saying they numbered around 200 fighters.

The monitoring group had also confirmed that over a 100 militants had surrendered in the past day, as the militant group loses control of its territory.

“Within the past 24 hours, approximately 100 ISIS terrorists have surrendered in Raqqa, and were removed from the city,” the coalition wrote in an emailed statement to AFP.

A Raqqa official told AFP on Saturday that Syrian ISIS members had surrendered overnight to the US-backed Syrian Democratic Forces (SDF) battling to take full control of the city, without specifying how many.

“Those that surrendered are local, not foreigners – the foreigners have not handed themselves in yet,” the official said.

“They sent a message to the Raqqa Civil Council [RCC] and to the tribal mediators.”

“The arrangement is designed to minimise civilian casualties and purportedly excludes foreign Daesh terrorists as people trapped in the city continue to flee the impending fall of Daesh’s so-called capital,” the coalition said, using the Arabic acronym for ISIS.

“People departing Raqqa under the arrangement are subject to search and screening by Syrian Democratic Forces,” it added.

Members of the RCC – a provisional administration for the city set up by the SDF – had been working with tribal leaders throughout the week to try to secure safe passage for civilians.

Hundreds of civilians have managed to flee the battle-ravaged city, which once served as the de facto Syrian capital of the militant group.

According to Abdel Rahman, up to 150 foreign fighters remain in the city and negotiations on their fate are still going on.

“The foreign fighters are asking to leave in one group towards areas under ISIS control in Deir Ezzor province,” in eastern Syria, he said.

But a spokesman for the Kurdish People’s Protection Units (YPG), which spearheaded the SDF, denied on Saturday that any discussions were taking place for the surrender of the city.

“We completely deny any negotiations or deal for the exit of Daesh [ISIS]. Until this very moment, we are fighting Daesh,” Nuri Mahmoud told AFP.

Backed by US-led coalition air strikes, the SDF’s Arab and Kurdish fighters have recaptured around 90 percent of Raqqa from ISIS.

Those who fled said the sheer intensity of the bombardment appeared to have made militants shift their positions, retreat or hide underground, giving civilians a window in which to escape.

In recent days, talks have been underway on a deal to protect civilians still trapped in the city, and the coalition said the agreement would “save innocent lives and allow Syrian Democratic Forces and the Coalition to focus on defeating Daesh”.

The announcement comes after the coalition said earlier Saturday that around 100 ISIS fighters had surrendered in the city in the last 24 hours.

An SDF military source also earlier told AFP that buses and trucks were waiting outside Raqqa to take the surrendered fighters further east to Deir Ezzor province, much of which remains under ISIS control.

Early reports indicate the city in complete is in ruin after months of bombardment from numerous foreign powers including the US and Britain.