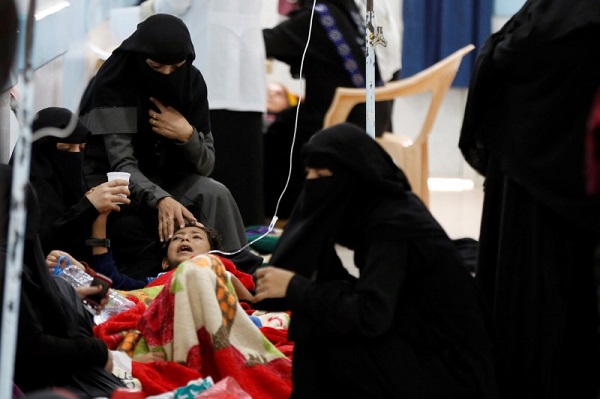 Women help a young relative infected with cholera at a hospital in Sanaa, Yemen May 7, 2017. REUTERS/Khaled Abdullah

GENEVA – The International Committee of the Red Cross reports Yemen is in the grips of an unprecedented cholera outbreak. The Swiss humanitarian organization said the number of suspected cases in the impoverished, war-torn country could reach 900,000 by the end of the year.This latest projection far exceeds the ICRC’s worst case scenario in July, when it forecast 600,000 suspected cases of cholera by the end of 2017. To date, the ICRC estimates around 750,000 suspected cases throughout Yemen, including more than 2,100 deaths.

“Nine-hundred-thousand — considering the figures I was given in the past, we could be to one million at the end of the year,” he said. “… I am told now that probably this is the worst health crisis of a preventable disease in modern times. So, I think, we have reached a new threshold in the Yemen conflict that really deserves to be underlined.”

Faite said Yemen’s public services are collapsing and the health sector is struggling. He said the Red Cross is providing health care workers with food because they are receiving no salary.

He told VOA there does not appear to be any quick resolution to this crisis.

“The situation from a humanitarian standpoint is a catastrophe,” he stressed. “We have something, which is close to a million cases of suspected cholera, maybe by the end of the year. And, this … is only a possible external illustration of something more serious. We could have an outbreak of something else.”

Faite said he sees no political settlement to the war, which has claimed thousands of lives and injured many more. He said he fears an extension of the conflict will lead to many more, even worse problems.