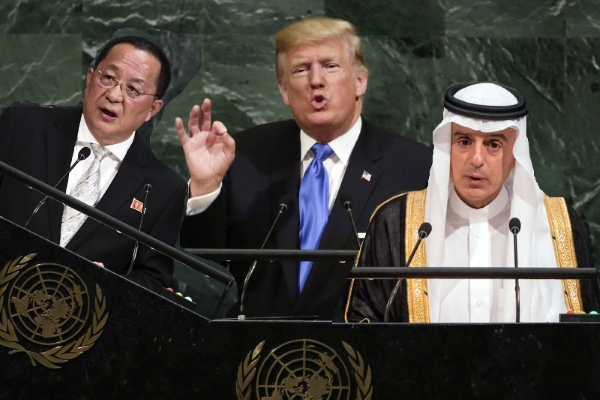 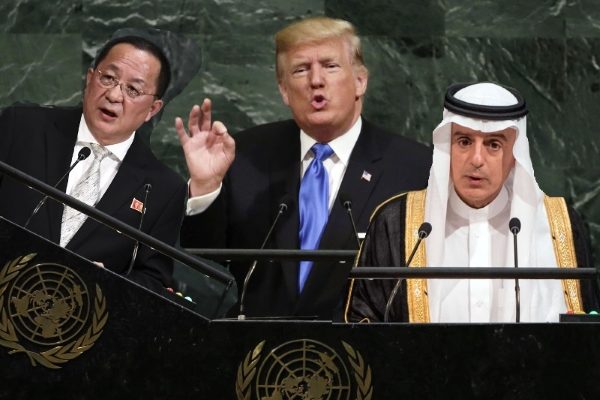 UNITED NATIONS — There were some verbal fireworks at the U.N. General Assembly Saturday as the foreign minister of North Korea responded to President Donald Trump and a senior Indian official lashed out at Pakistan.

One of the most anticipated speeches of the week was North Korean foreign minister Ri Yong Ho.

He did not disappoint.

Ri called Trump “a mentally deranged person full of megalomania” who is on a suicide mission of his own, and peppered his 22-minute address with other choice words and insults. Delegates audibly applauded at the end.

In his speech Tuesday, the U.S. president called North Korean leader Kim Jong Un “Rocket Man” and said he was on a suicide mission with his nuclear program.

Ri wasn’t the only one who used the podium to level a verbal attack on an adversary.

India’s foreign minister, Sushma Swaraj, began with the spiritual greeting of “Namaste” and then launched into a vocal takedown of neighbor and rival Pakistan.

“Why is it that today India is recognized as IT [technology] superpower in the world and Pakistan is recognized only as the preeminent export factory of terror?” Swaraj asked.

“What has Pakistan offered to the world, and indeed to its own people, apart from terrorism?” she added.

“We produced scholars, doctors, engineers. What have you produced?” the minister continued. “You have produced terrorists. Doctors save people from death; terrorists send them to death.”

Syria’s deputy foreign minister Walid Mouallem touted his military’s recent advances in that county’s civil war, which is in its seventh year.

“The liberation of Aleppo and Palmyra, the lifting of the siege of Deir el-Zour, and the eradication of terrorism from many parts of Syria, prove that victory is now within reach,” Mouallem said.

He also criticized Turkey and the U.S.-led anti-Islamic State coalition for pursuing what he called aggressive polices against the Syrian people. Adding that their agendas were in “stark contrast to positive role played by Russia and Iran.”

Saudi foreign minister Adel Al-Jubeir condemned the Myanmar authorities policy of discrimination and their military campaign against Rohingya Muslims. He said Saudi Arabia has provided $15 million so far to assist the displaced with humanitarian aid.

The U.N. said Friday that 429,000 have fled to neighboring Bangladesh since violence erupted there on August 25.

Of the Saudi-led war in Yemen on Houthi rebels after they tried to oust the government, he said it was not a choice for the kingdom.

“Our coalition is helping the legal government of Yemen to save the Yemeni people and to recover its state,” Jubeir said. He said Riyadh supports a political solution to the more than two-year-old conflict.

But he did not address international concerns that the coalition was causing scores of civilian casualties and bombing hospitals and schools.

While President Joseph Kabila of the Democratic Republic of Congo said his military is fighting terrorists in the center and east of the country.

Human rights groups and other monitors say a year of fighting between government forces and militant groups has led to scores of civilian deaths and unimaginable suffering. Over 1.4 million people have been displaced in the central Kasai provinces alone.

The annual gathering of leaders will wrap up on Monday.