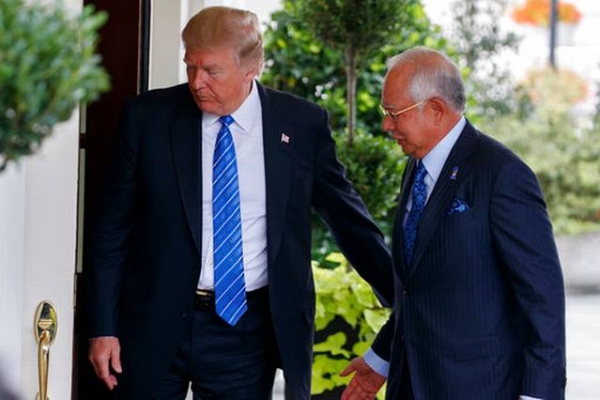 In his opening remarks after welcoming Prime Minister Datuk Seri Najib Razak to the White House, Trump said Malaysia was a vital trading and investment partner for the US, citing the country’s recent purchase of over US$10 billion (RM42 billion) in aircraft from American plane-maker Boeing.

“I just want to say it’s an honour to have you here, and to have your delegation with us,” Trump said to Najib.

The US president also said Malaysia has an important role to play in global efforts to curb the spread of the Islamic State terrorist group.

Najib responded by telling Trump that Malaysia was steadfast in the fight against extremism, reiterating his previous pledge to be staunch and dependable ally to the US in its campaign to eradicate the ISIS.

“The best way to fight [ISIS] is to partner moderate and progressive Muslim regimes and countries,” said Najib.

Najib arrived on Monday for an official visit to the US.

The two leaders are expected to discuss security and trade issues in their closed-door meeting that is happening now, and are scheduled to hold a joint press conference later.

Najib is additionally expected to bring up the plight of the Rohingya in Myanmar, to urge Washington to pressure Naypyidaw into curbing the ongoing sectarian violence there.

Aside from Trump, other US officials scheduled to be in the meeting are Vice President Mike Pence, State Secretary Rex Tillerson, Defense Secretary James Mattis, and Trump’s son-in-law and advisor Jared Kushner.