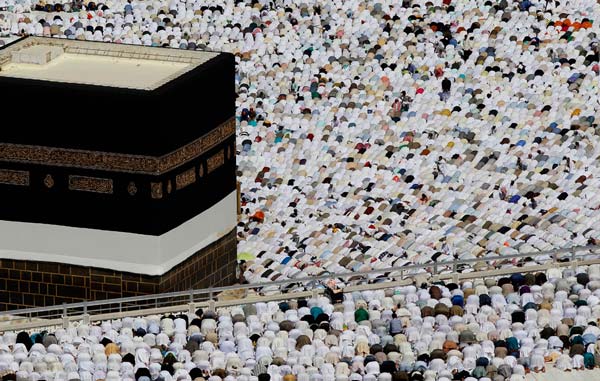 Abu Hurayrah (Allah be pleased with him) reports that The Messenger of Allah (Allah blessings and peace be upon him) said “Whoever performs Hajj for the sake of pleasing Allah and therein utters no word of evil, nor commits any evil deed, shall return from it as free from sin as the day on which his mother gave birth to him.”

When a child is ushered into this world, it enters this life without any blemish and is free from any form of sin. Now, when the Hajj has been performed with utmost sincerity for Allah’s sake, the pilgrim returns to that sinless state.

When we speak of forgiveness of sins as in the Hadeeth mentioned above, we actually refer to minor sins. However, the promise of this Hadeeth has been noted in so many ahadeeth that some learned Ulama are of the opinion that minor as well as major sins are included in this pardon from Allah.

In this Hadeeth, three things are mentioned. In the first place, we read that Hajj should be for Allah’s sake, and that there should be no worldly object and no ulterior motive prompting this holy deed, neither should it be for the show of things, nor for personal fame. Many people proceed to Makkah for the sake of personal honour and show. Such people have indeed wasted whatever they have spent by way of wealth, health and energy. For them there shall be no reward. We admit that when a person has performed his Hajj even for the sake of showing others, his obligation has been carried out. But how foolish it is indeed that a person should deny himself such great virtue and reward (in the form of Allah’s great pardon) merely because of his desire to be noted among some people.

The Ulama have stated that should a person perform a “Hajje Badal” on behalf of someone else for a specific price, so that he derives worldly benefit from such a Hajj, he too is included among those who perform Hajj for commercial purposes.

In the first of these two Traditions, we read that the wealthy ones will perform Hajj for the sake of having a tour and a holiday. In the second Hadeeth we read again that they will do so for the sake of business. In fact, there is no contradiction here even though it apparently seems so. In the former case, those mentioned as wealthy ones are actually those very rich ones who in the second Hadeeth are called sultans or rulers. In actual fact they are slightly lower than the rulers. For this reason, they are also called the middle class.

What Umar (Allah be pleased with him) implied was that having come to the Holy House solely for Allah’s sake, their previous evil deeds were forgiven. They can now start anew. The second point that becomes clear from the Hadeeth under discussion is that no evil word shall be spoken. The Ulama have explained that the word “rafath” (evil speech) includes every single form of words which are unseemly, nonsensical and unnecessary to such an extent that even the mention of sexual relations with one’s wife is also included. To indicate or insinuate such actions with hand signs or the eyes, should be refrained from. All such actions and others which stir passions and lust are condemned.

The third point towards which attention is drawn is “fusooq”, which here signifies every single form of disobedience to Allah’s will. One should especially avoid any form of argument and dispute. In one Hadeeth, our The Messenger of Allah (Allah blessings and peace be upon him) has said: “The beauty of Hajj is attained by speaking amicably with others and to feed them.” To argue with fellow Hujjaj and to fight with them is the opposite of amicable speech. Hence it is the duty of a Hajji not to criticise his fellow Hujjaj, to meet everyone with love, humility and humbleness, and to deal with them in a most friendly manner. Some Ulama have explained that to meet others in a friendly manner does not only mean that one should not hurt or trouble one’s fellow men. It means that one should (without retaliation) bear and pardon the hurt that comes from their side to you.

The word safar (a journey) means in actual fact “to expose”, “to make clear”. The Ulama informs us that a journey is called safar in Arabic because on a journey one’s character is exposed and becomes clear.

There can be no doubt about it that only after having been with a person in similar cases can one truly know a person’s character and his reactions to situations. On a journey, there is always a certain amount of inconvenience which inevitably leads to arguments and it is for this reason that the Qur’an especially mentions: “And let there be no arguments in Hajj.”