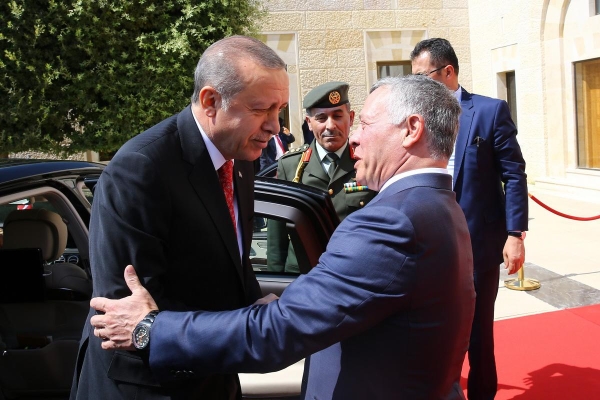 President of Turkey, Recep Tayyip Erdogan (L) is welcomed by Abdullah II of Jordan (R) during an official ceremony due to his arrival at Raghadan Palace in Amman, Jordan on August 21, 2017. ( Kayhan Özer - Anadolu Agency )

Erdogan, who has repeatedly backed the rights of worshippers to freely pray at Al-Aqsa Mosque, spoke to reporters in Istanbul just before setting off to Jordan for an official visit.

“I want to note the importance we put on the role of Jordan in the protection of the holy places in Jerusalem,” he said. “We don’t want to experience the same abuse, violation of rights and attacks.

“So, the Muslim world should be in solidarity on Jerusalem.”

Jordan is the custodian of the mosque compound in East Jerusalem, the third holiest site for Muslims. The site, known as the Temple Mount to Jews, is also venerated by Jews and Christians.

Last month, Israel imposed fresh security measures at Al-Aqsa following the killing of two police officers at the site. The measures, including metal detectors and cameras, led to renewed violence between Palestinians and security forces and led to outrage across the Muslim world.