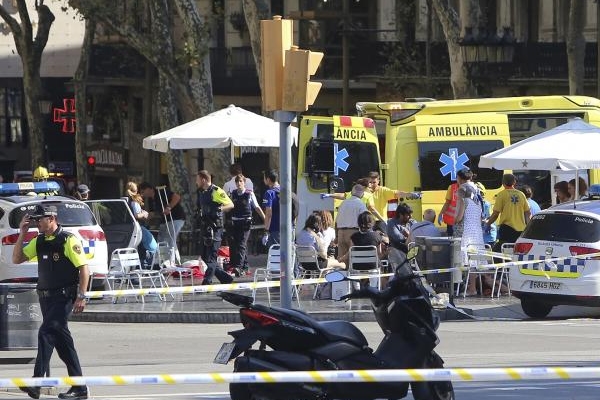 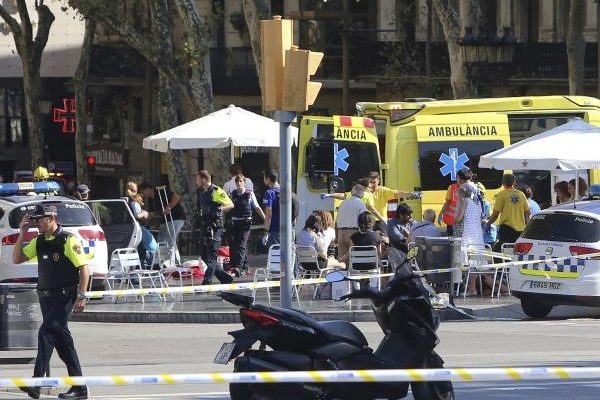 A driver deliberately ploughed a van into the pedestrians of one of Spain’s busiest streets on Thursday, killing up to 13 people in what police said was a “terrorist attack”.

“Huge collision on the Las Ramblas in Barcelona by an individual driving a van, many injuries,” a statement from Catalan police said.

At least 80 people have been hospitalized and around 13 have died, Carles Puigdemont, Catalonia’s regional head, told a news conference. It was still not clear how many attackers had been involved in the incident. A driver ran over two police officers at a checkpoint in Barcelona following a van attack in the city centre, Catalan police said on Twitter. It was not immediately clear whether the incident was linked to the van attack in the city centre.

The ISIS group has claimed responsibility for the attack, but police have not yet confirmed ISIS’ claims.

Two people have been arrested thus far. Spanish public broadcaster RTVE said a suspect was arrested and Reuters later said another person has been arrested in connection with the attack. Police said the van used in the attack was rented by a man named Driss Oukabir, in the town of Santa Perpetua de la Mogada, according to El Pais, but it remains unclear whether the arrested suspect is Oukabir. They later released a photo of Oukabir.

The area around the incident was cordoned off, with several ambulances and police vehicles on the scene, an AFP correspondent said. Heavily armed police were seen going door-to-door on Las Ramblas after the van attack, while witnesses reported seeing several dead bodies in the street.

A second van linked to the Barcelona attack was found in the small town of Vic in Catalonia, local authorities there said on Twitter. Police had cordoned off the area and were inspecting the vehicle, the city council said.

Spanish media earlier reported that a second van had been rented as a getaway car by attackers.

Police in Barcelona, Spain’s second-largest city, described the initial incident on Twitter as a “massive crash”. Emergency services said people should not go to the area around the city’s Placa Catalunya, and requested the closure of nearby train and metro stations.

Witnesses to the attack said the white van sped down the road, moving from left to right without slowing down, with many running for shelter in nearby shops and restaurants.

El Pais newspaper said the driver of the vehicle had fled on foot after mowing down dozens of people, as AFP reported that Barcelona police had confirmed the incident was a “confirmed terrorist attack”.

The Cadena Ser radio station reported that a Spanish identity card with an Arabic name has been found inside the van, The Guardian reported.

Police said they do not know the motive for the attack.

The famous Las Ramblas boulevard is one of Barcelona’s busiest streets, normally thronged with tourists and street performers until well into the night.

Steven Turner, a British ex-pat who works in the area of the van attack, told to the BBC: “People in my office saw a van ramming into people on Las Ramblas. I saw about three or four people laying on the ground.

“There are lots of ambulances and armed police with assault rifles around now.

“About five minutes later I heard lots of screams from the crowd and then they dispersed.”

A taxi driver told the TV3 television station that he saw people being run over by the van.

The channel reported that at least one attacker was holed up in a Turkish restaurant called Bar Luna de Istanbul but police later dismissed the report.

Mobile phone footage showed several bodies strewn along the Ramblas, some motionless. Paramedics and bystanders bent over them, treating them and trying to comfort those still conscious.

Around them, the boulevard was deserted, covered in rubbish and abandoned objects including hats, flip-flops, bags and a pram.

Commenting on the incident, Spanish Prime Minister Mariano Rajoy tweeted “The terrorists will never defeat a united people who love freedom in the face of barbarism”.

“All of Spain is with the victims and families,” he added.

US President Donald Trump said on Twitter: “The United States condemns the terror attack in Barcelona, Spain, and will do whatever is necessary to help.”

And UK Prime Minister Theresa May said “the UK stands with Spain against terror” after calling the incident a “terrible attack”.

Spain has so far been spared the kind of militant violence that has occurred in nearby France, Belgium and Germany.

But it was hit by what is still Europe’s deadliest attack in March 2004, when bombs exploded on commuter trains in Madrid, killing 191 people in an attack claimed by al Qaeda-inspired militants.

Vehicles have been used in several terror attacks in Europe in recent years, including a massacre that claimed 86 lives in the French Riviera city of Nice.

That onslaught in July last year and other similar attacks were claimed by the ISIS group.

In July 2015, a hooded attacker opened fire in a downtown Barcelona near the Ramblas, leaving two people injured, police said.

One person was struck by bullets while the other was shooting, who fled the scene. No suspected motive for the attack was given.

Spain has emerged as a potential target for militants, with extremist websites mentioning it for historical reasons, since its territory was once under Muslim rule.

But they advertise every arrest of alleged militants, most of them detained for propaganda, recruitment for extremist groups or “glorifying terrorism”.

According to the interior ministry, more than 180 “jihadist terrorists” have been arrested since June 2015 when it raised the terror alert level to four out of a maximum of five, in domestic and foreign operations.