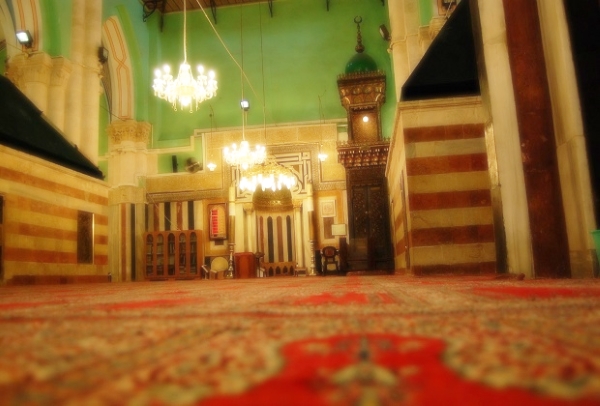 In the name of Allah, Most Compassionate, Most Merciful,

The belief (Aqidah) of the mainstream Ahl al-Sunnah wa al-Jama’ah is that our beloved Messenger of Allah (Allah bless him & give him peace) and all the other Prophets are alive in their graves.

This life is physical and worldly (dunyawiyyah), and not just a spiritual one with the sole (barzakhiyyah), as the latter is common for all the people. They are usually involved in performing Salat and worshiping Allah (out of their own choice and not binding on them), and we can normally not see or feel them.

This was the Aqidah held by the Sunni Muslims throughout the ages, and many books in Arabic have been written on this subject. The great Imam Suyuti (Allah have mercy on him) compiled a whole work on this subject titled ‘Inba al-Azkiya bi Hayat al-Anbiya’ (Informing the intelligent regarding the living of the Prophets), in which he quoted many evidences in support of this belief. Similarly, other scholars such as: Imam al-Bayhaqi, Imam Abd al-Wahhab al-Sha’rani and Imam Ibn al-Qayyim in his book ‘al-Ruh (The Soul) have also written and gathered evidences with regards to this.

Evidences on the prophets remaining alive in their graves:

There are many evidences in the Qur’an, Hadith and sayings of the predecessors regarding the prophets remaining alive after death. Some are reproduced here:

“And question thou (O Muhammad) our Messengers whom we sent before you. Did we appoint any deities other that Allah, Mot gracious, to be worshiped?” (Surah al-Zukhruf, 45).

Many commentators (mufassirun) of the Qur’an have stated in their respective exegeses that the living of the Prophets can be proved from this verse (See: Durr al-Manthur of Suyuti, Ruh al-Ma’ani by al-Alusi and others).

“And say not of those who are martyred in the way of Allah, “they are dead”, nay, they are living, though you perceive it not” (Surah al-Baqarah, 154).

Regarding this verse, the great Hadith expert (hafidh), Imam Ibn Hajar al-Asqalani (Allah have mercy on him) states in his monumental commentary of Sahih al-Bukhari, ‘Fath al-Bari’:
“When the living of the martyrs is proven from the text of the Qur’an, then this is also proven from an analogical point of view. And the Prophets are superior then the martyrs” (Fath al-Bari, 6/379).

3) Sayyiduna Anas ibn Malik (Allah be pleased with him) narrates: “On the night of Isra, the Messenger of Allah (Allah bless him & give him peace) passed by the grave of Sayyiduna Musa (Allah bless him), and found him performing Salat in his grave” (Recorded by Imam Muslim in his Sahih, and others).

4) Anas ibn Malik narrates that the Messenger of Allah (Allah bless him & give him peace) said: “The Prophets are alive in their graves performing Salat” (Recorded by al-Bayhaqi in his ‘Hayat al-Anbiya’ and Abu Ya’la in his Musnad).

The above Hadith has been authenticated by many Hadith scholars, such as: Ibn Hajar, al-Haythami, Ali al-Qari, al-Munawi, al-Shawkani and others.

6) Sayyiduna Abu Huraira (Allah be pleased with him) narrates that the Messenger of Allah (Allah bless him & give him peace) said: “None of you greets me except that Allah returns my soul on me until I return his greeting” (Musnad Ahmad, 2/527 and Sunan Abu Dawud, 1/279).

7) Anas ibn Malik narrates that the Messenger of Allah (Allah bless him & give him peace) said: “The Prophets are not kept in their graves for more than forty nights, but they remain worshiping Allah until the trumpet will be blown” (Sunan al-Bayhaqi).

Due to the fact that there are many narrations regarding the living of the Prophets (of which only a few have been reproduced as an example), Imam al-Suyuti (Allah have mercy on him) is of the view that these narrations have reached the level of certainty (tawatur).

8) The great Hadith master, Hafidh Ibn Hajar al-Asqalani (Allah have mercy on him) states: “Death will never come to the blessed Messenger of Allah (Allah bless him & give him peace) in his grave, rather he will remain alive, due to the fact that the Prophets remain alive in their graves” (Fath al-Bari, 17/22).

9) Imam al-Subki (Allah have mercy on him) states: “It is from our beliefs that the Prophets are alive in their graves”. (Tabqat al-Shafi’iyya al-Kubra, 6/266).

10) The great Hanafi jurist, Allama Ibn Abidin (Allah have mercy on him) says: “The Prophets are alive in their graves, as proven from the Hadith” (Rasa’il of Ibn Abidin, 2/203).

11) Imam al-Shawkani (whom the Salafis normally refer to) states: “The Prophet (Allah bless him & give him peace)) is alive in his grave, as has been established in the Hadith “The Prophets are alive in their graves”. (See: Nayl al-Awtar, 5/101).

12) Also, one of the major incidents that prove this, is the incident of Me’raj (Ascension of the Prophet to the heavens), where he met and conversed with many Prophets. He also led them in prayer in Masjid al-Aqsa.

The above evidences from the Qur’an, Hadith and the sayings of the predecessors (salaf) are sufficient to prove the fact that the Prophets remain alive in their graves after they pass away from this world. There are many other evidences which we have not mentioned here, due to the fear of prolonging our discussion.

This is the reason why this Aqidah has been held by the mainstream Sunni scholars throughout the eras. It is only recently that some people have objected to this view.

For more details on this subject in Arabic, one may refer to Imam Suyuti’s ‘al-Inba’ and Imam al-Bayhaqi’s ‘Hayat al-Anbiya’.