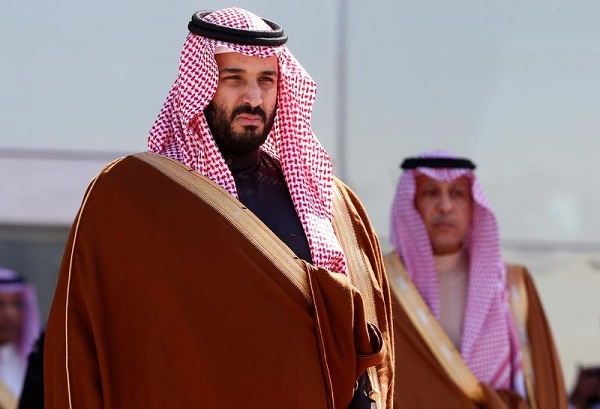 SANAA, Yemen – Yemenis celebrated on Tuesday at the news the heir to the Saudi throne Mohammed bin Salman had confessed to two former US officials he “wants out” of the Yemen war.

According to the emails obtained by Middle East Eye, 31-year-old Mohammed bin Salman revealed his wish to Martin Indyk, the former US ambassador to Israel, and Stephen Hadley, a former US national security adviser.

Yemenis believed the reports could mean a peaceful resolution to the conflict may soon be in the works. Such a result could not come soon enough for millions trapped in a conflict that has killed thousands and left millions on the brink of starvation and in the grip of the world’s worst cholera epidemic.

“I do not care who wins the battle, but if Saudi Arabia pulls out, the war will come to an end and then we can go back to our regular life,” Mohammed al-Mahwiti, a teacher in the capital, Sanaa, told MEE.

For Mahwiti, who resorted to selling ice-cream to feed his family after his salary was cut off for 10 months, Saudi Arabia’s involvement in the war has exacerbated his poverty.

“Saudi Arabia has given Yemenis weapons to fight but it did not give us food to eat,” he said.

Mahwiti said he had received no support from the Saudi-led coalition or the Yemeni government led by exiled president Abd Rabbuh Mansour Hadi.

“I am not a Houthi. I am a Yemeni teacher and the war cost me my job, leaving me struggling to afford food,” said Mahwiti.

“The Yemeni government and the Saudi-led coalition only helped people of the south, considering us as enemies and depriving us of everything,” he added.

According to Mahwiti, civil servants in Yemen’s southern districts have been receiving their salaries regularly, while state employees in northern areas controlled by the Houthis are regularly denied them.

Meanwhile, many Houthi supporters seem positive about reports that Saudi Arabia wishes to end the conflict.

“If Saudi Arabia stops the offensive against Yemenis, then we can negotiate and find a peaceful solution,” a Houthi supporter told MEE on condition of anonymity.

As with Mahwiti, the leaked emails gave Tareq al-Mallah, a Yemeni journalist and activist, hope about a peaceful solution to the war in Yemen.

“Away from the details, those emails indicate that Saudi Arabia wants to end the Yemen war and… we may be hearing something about that in the next months,” Mallah said.

The leaked emails also gave prominence to parliamentarian Mohammed al-Hazmi, who is also spokesman for the Yemeni Scholars Association and leader in the Islah Party.

In a Facebook post published on 9 August, Hazmi wrote: “End the first round of fighting while we still have something to maintain. Another round [of fighting] will not give you a chance to do that.”

Two days later, the head of the Houthi Revolutionary Committee, Mohammed al-Houthi, backed Hazmi’s comments: “I welcome the call of some Islah leaders for dialogue and putting a stop to the war, despite some countries wanting it to continue.”

Hazmi is known for having maintaining a strong relationship with Saudi Arabia and for his efforts in calling on the various parties to the war, including the Houthis, the General People’s Congress [the party of former president Ali Abdullah Saleh] to negotiate and stop the war.

While many Yemenis were happy to receive the reports, some believe that the country would remain under Saudi “guardianship” even if the country ended its war.

“Yemen does not have security forces to prevent arms smuggling or the intervention of Iran,” Yemeni journalist Amgad Khoshafa told MEE.

Over the past two years, Saudi Arabia and a mostly Gulf Arab military coalition have launched thousands of air strikes and used a small number of ground troops on the Yemeni-Saudi borders to try to dislodge the Houthis and re-establish the presidency of Hadi, who fled to Riyadh when the Houthis advanced on Aden.

Increasingly, the Houthis have been retaliating with cross-border missile strikes on targets deep inside the kingdom.

According to Khoshafa, it is also unlikely that Saudi Arabia will pull out of Yemen until it has resolved its conflict the Houthi rebels and their allies, suggesting that Saudi Arabia may “try to build a relationship with Iran through Muqtada al-Sadr”.

The influential Shia cleric made a rare visit to Saudi Arabia in July. Following the meeting with the crown prince in Jeddah, Sadr banned anti-Saudi images, slogans and banners from Iraq’s streets and called on the Baghdad government to dismantle the Iran-backed paramilitary Hashd al-Shaabi forces.

While many Yemenis were positive about the reports, some fighters have been worried about the news.

“If Saudi Arabia pulls out of the war without enforcing radical solutions, there won’t be coalition fighters in Yemen which will result in the Houthis and Saleh’s forces taking over the whole country,” said Imran al-Rofaidi, a fighter with the pro-government forces in Taiz.

“We’ve recently been hearing about the political solution in Yemen and we prefer it, but we do not want Saudi Arabia to pull out until we see radical solutions.”

Rofaidi, who has been fighting the Houthis under the umbrella of the Saudi-led coalition which was launched in March 2015, believes the resistance will be crippled without Saudi support.

“I am not a soldier… I am originally a civilian and like many others, I joined the battle to defend my city from the Houthis rebels,” explained Rofaidi.

“But our battles are backed by the Saudi-led coalition airstrikes and ammunition when we need them,” he added.