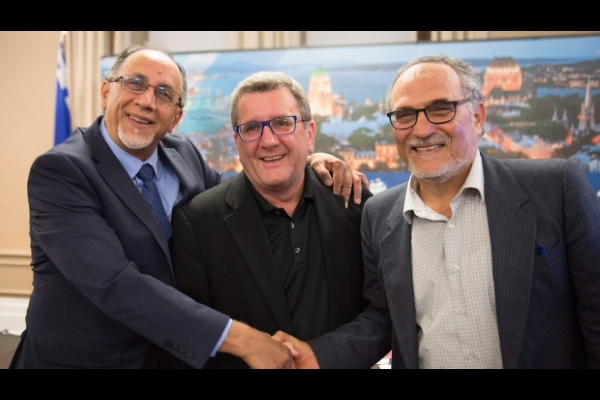 Boufeldja Benabdallah, from left to right, interim co-ordinator at the Quebec Islamic Cultural Centre, Quebec City Mayor Régis Labeaume and Mohamed Labidi, the president of the centre, shake hands after they announced the establishment of a Muslim cemetery, at city hall in Quebec City. (Jacques Boissinot/Canadian Press )

Muslims in Quebec City finally have something to celebrate. They now have a cemetery of their own.

On Friday, August 4th, Quebec City Mayor Regis Labeaume announced the establishment of a Muslim cemetery in the city.

This is welcome consolation for the community that is still coming to terms with the deadly attack on a mosque, that became the scene of heartbreak and sorrow for many people.

On Sunday January 29th, when the evening prayers were over, just before 8 pm, a young man began shooting in a rampage that left 6 men dead, and 19 others badly injured.

Alexandre Bissonette was charged with six counts of first-degree murder, after he called police to surrender that night.

The news of the killings sent shock waves across Canada and the world.

Prime Minister Justin Trudeau and Quebec Premier Philippe Couillard called it a terrorist attack, however, legal scholars say it would be difficult to prove a terrorist connection beyond a reasonable doubt in court.

“Our roots are going deep in this land, our dead should be able to be buried in this land too”

In Quebec City, though there are several mosques, serving a diverse and growing Muslim community, there was no cemetery in which to bury the dead.

Most of the men killed on January 29th were buried in their countries of origin. All of them were citizens of Canada.

The site in which the community was planning to open a cemetery, southwest of Quebec City, became the focal point of a few objectors.

Under a former provincial law, this raised the need for a referendum of nearby residents.

After intense media coverage, the vote resulted in 16 people voting for the cemetery, and 19 voting against it.

The community, and much of the rest of Quebec and Canada, was shocked.

Imam Hassan Guillet, based in nearby St. Jean-sur-Richelieu, came in to help.

He said he couldn’t understand the opposition, that many religious denominations have their cemetaries, Catholic, Protestant, Jewish, why wouldn’t the Muslim community have theirs?

In an interview today he shared his concern and worry that the feeling of rejection could have had dire consequences.

He found it challenging to convince the Muslim community that not all Quebecers were racist, and that this was their home now.

Meanwhile, Quebec City Mayor Regis Lebeaume had vowed, at one of the funerals for the six men in February, that the community would have a cemetery.

Three weeks after the no-vote in St. Apollinaire, the mayor delivered on that promise.

After that very low point, when the small town had rejected their request for the cemetery by just two votes, came a moment of joy and celebration in hearing that the Mayor of Quebec City, had kept his word, and a site for a cemetery was available.

And it is a much better location, closer to the city.

Imam Guillet says the normal Friday tradition in the mosque, of the Imam alone speaking, could not be followed on August 4th.

The members could not contain their joy and gratitude. They had to speak; some of their prayers had been answered.

The Muslim cemetery in Quebec should be ready by October or November this year, and Imam Guillet is hoping it will be named after the men who died in the mosque.

Ibrahima Barry, age 39, Mamadou Tanou Barry, 42, Abdelkrim Hassane, 41, Aboubaker Thabti, 44, Khaled Belkacemi, 60, died on January 29th, 2017, and Azzedine Soufiane, 57, who, according to witnesses, ran at the shooter to try and stop him, and was killed in the process.