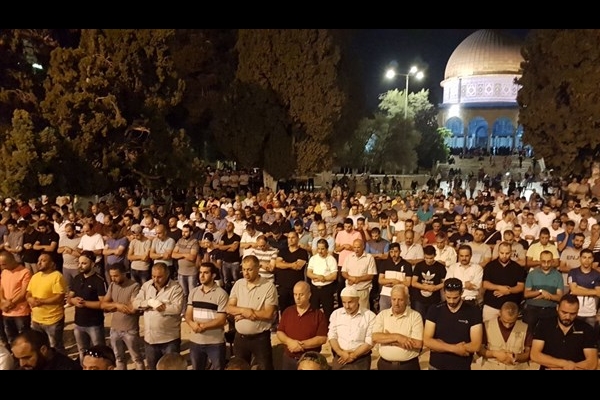 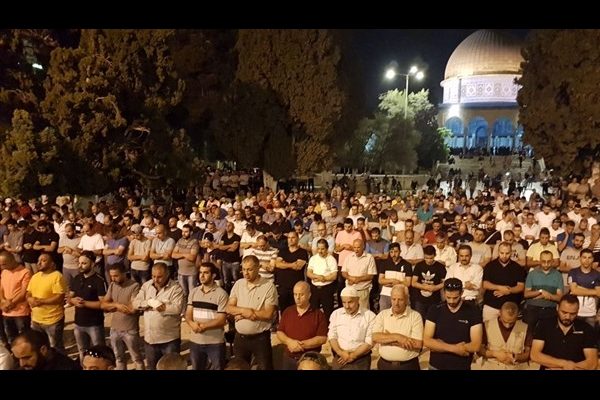 Thousands of Palestinians have re-entered al-Aqsa Mosque compound in occupied East Jerusalem, after Israeli authorities lifted an age restriction it had placed earlier on Friday.

The Islamic Waqf religious authority that administers the compound announced that all gates would be opened to Palestinians of all ages.

Earlier in the day, Israeli police prevented access to the holy shrine for men under the age of 50, and closed some of the compound’s gates.

The announcement came just a few hours before Friday prayers began. Thousands of men prayed in the streets and just outside the compound’s gates.

According to religious officials, 10,000 worshippers made their way inside al-Aqsa Mosque compound for noon prayers.

Small protests against these restrictions broke out after prayers in different towns and cities in the occupied West Bank.

Police fired water cannon and tear gas at protesters in Bethlehem, and there was a high police presence near al-Aqsa Mosque compound.

The Palestinian Red Crescent said it received 225 cases of injuries across the West Bank and Jerusalem.

Al Jazeera’s Stefanie Dekker, reporting from outside the Damascus Gate, said the situation there had been “largely peaceful”.

“There’s been a few skirmishes around Lion’s Gate and Wadi Joz, but in general everything has passed relatively peacefully,” she said, referring to a Palestinian neighbourhood north of the Old City.

In Bethlehem, approximately 200 Palestinians held prayers in front of the Separation Wall.

Later on, a young man was shot to death by Israeli soldiers after an alleged stabbing attempt south of Bethlehem near the Gush Etzion settlement block.

However, local witnesses said that Israeli soldiers fired at 24-year-old Abdullah Taqatqa when he was 20 metres from them.

Protests also broke out along the Gaza Strip’s border, resulting in the killing of 16-year-old Abdelrahman Abu Humeisa by the Israeli army.

Seven other Palestinians were wounded by live fire in east Jabaliya, north of the strip and east of the Bureij area, in the middle.

In Ramallah, clashes broke out after prayers near the Qalandiya checkpoint, one of the main barriers that separates the West Bank from Jerusalem.

“We saw Israeli security forces use concussion grenades as well as a lot of tear gas,” Al Jazeera’s Scott Heidler said, reporting from Qalandiya. He said live rounds had also been used.

In an act of civil disobedience, Palestinians have held prayers day and night outside al-Aqsa Mosque compound for the past two weeks in protest at Israel’s increased surveillance measures and obstacles to free movement at the entrances and gates.

On Thursday, Palestinians made their way inside the compound for the first time in 13 days after the Israeli government removed newly installed security cameras and metal detectors.

The scenes of jubilation, with many describing the day as a victory for the Palestinians, quickly soured after Israeli forces fired stun grenades and tear gas inside the compound at the Palestinians, wounding more than 100.

The Israeli measures were installed after an attack carried out by three Palestinian citizens of Israel on July 14, who shot and killed two Israeli policemen.

The Palestinians were then chased inside the compound and shot to death.

Israeli authorities closed the compound for two days, angering Palestinians, who feared that a change in the status quo of the holy site would see it going under the control of Israelis.

In more than 12 days of protests, Israeli forces wounded more than 1,000 Palestinians during clashes, according to the Palestinian Red Crescent.

Three Palestinians were killed last Friday during Day of Rage protests across the West Bank, including East Jerusalem.

Later that night, a Palestinian assailant hopped over the fence of Halamish, a Jewish-only settlement in the West Bank, and killed three Israelis in their home.

The compound, known to Muslims as the Noble Sanctuary and to Jews as the Temple Mount, has been the site of much contention in recent years.

‘It is our social place’

Palestinians knew that they would bear the responsibility of protecting the mosque, Buderi said, adding that the Arab and Islamic world can do nothing.

“The Palestinians joined together, and forgot about their political and social differences, and that’s how we won,” he said.