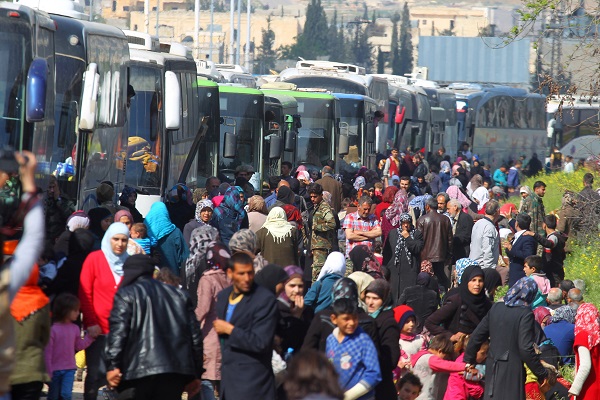 File photo: People that were evacuated from the two villages of Kefraya and al-Foua walk near buses, after a stall in an agreement between rebels and Syria's army, at insurgent-held al-Rashideen, Aleppo province, Syria April 15, 2017. REUTERS/Ammar Abdullah

The Syrian army announced Saturday the end of fighting in parts of Eastern Ghouta after an agreement was struck between rebels and Russia, an ally of the Syrian regime.

In a statement, the army said “a halt in fighting in some areas of Eastern Ghouta in Damascus province” would take effect at midday Saturday after all sides signed on to the details of a safe zone agreement.

The army did say, however, that it would “retaliate in a suitable manner” should the rebels violate the cease-fire agreement.

Earlier Saturday, Russia said it had signed a deal with Syrian rebels during peace talks in Cairo to outline how the safe zones would work.

Russia said the agreement would include “routes to supply humanitarian aid to the population and for free movement of residents,” and that humanitarian convoys would be sent within the next few days.

The Eastern Ghouta area is one of four proposed safe zones in Syria that came about after talks between Russia, Iran and Turkey earlier this year.

According to Russia, all sides have now agreed on the precise borders of the safe zone, “as well as the deployment locations and powers of the forces monitoring the deescalation.”

The Syrian civil war has killed more than 330,000 people, according to U.N. estimates, and the world body has established a commission of inquiry to document cases of torture, summary killings and other atrocities by all sides in the conflict.