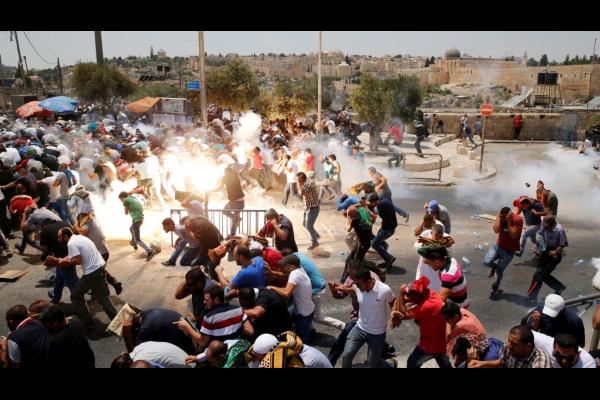 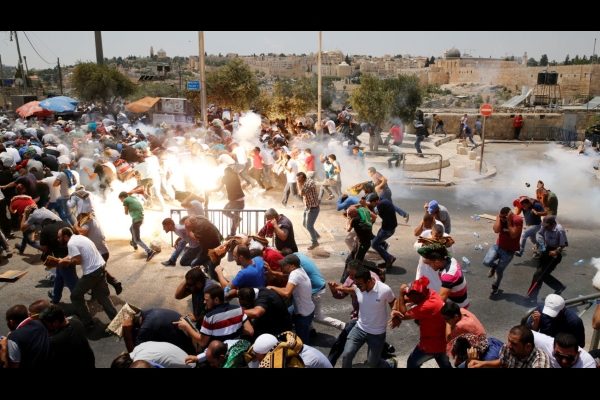 At least three Palestinians have been killed, according to local media, and hundreds more injured amid mass protests over new Israeli security measures at the al-Aqsa Mosque compound.

In the first incident, an Israeli settler killed an 18-year-old Palestinian man in the Ras al-Amud neighbourhood in occupied East Jerusalem, according to the Palestinian Ministry of Health.

The death of Muhamd Mahmoud Sahraf was confirmed by Israeli security and the Red Crescent.

A second Palestinian was also confirmed killed by live fire during the demonstrations that followed Friday prayers, officials at a hospital in Jerusalem told AP news agency.

The Palestinian Authority also reported that a third man was killed during clashes with Israeli forces in the West Bank.

The two other fatalities were identified as Muhamad Mahmoud Khalaf and Muhamad Hasan Abu Ghanam.

Israeli police also fired live ammunition, tear gas and rubber-coated bullets at Palestinians protesting against the new measures, including the barring of Muslim men under the age of 50 from the holy site and the installation of metal detectors.

In one incident, an Israeli soldier, who was carrying a firearm, kicked an unarmed worshipper while he was praying.

The protests come a week after a deadly shoot-out at the occupied East Jerusalem compound, which triggered tensions.

The rallies started after the Muslim Friday prayers, which took place around midday local time.

At the conclusion of the Isha evening prayers, clashes erupted again with Israeli forces firing stun grenades at the crowd, Al Jazeera’s Harry Fawcett, who was reporting outside al-Aqsa, said.

At least 140 Palestinians have been injured in occupied East Jerusalem and the West Bank, according to the Palestinian Red Crescent.

Earlier in the day, police swarmed into Jerusalem’s Arab neighbourhoods, particularly in and around the walled Old City where the shrine is located.

At least 3,000 Israeli police and border police units had been deployed to the area, according to a police spokesman.

Israel’s security cabinet said that Israeli police would decide when to remove metal detectors and turnstiles installed at the compound last week – a disappointing statement to Palestinians who view the measures as collective punishment and an infringement on the status quo, which gives Muslims religious control over the compound and Jews the right to visit, but not pray there.

Israel tightened its grip on the compound after two Israeli security officers were killed in an alleged attack by three Palestinians, who were killed by Israeli police following the violence.

Palestinian member of the Knesset Mohammad Barakeh told a meeting of Palestinian leaders in Jerusalem early on Friday that the security cabinet’s decision is a “political game”.

The leaders rejected Israel’s measures and vowed to continue to hold prayers outside the compound until the barriers are removed.

Over the past week, there have been daily demonstrations and clashes between Israeli forces and Palestinians.

On Friday, a Palestinian advocacy group said 10 prominent Palestinian activists had been detained in Jerusalem.

The Palestinian group Hamas and Muslim leaders worldwide called for mass protests on Friday over the measures.

“To the Zionist enemy, I say openly and clearly: al-Aqsa Mosque and Jerusalem are red lines. Truly they are red lines,” he said.

“To the enemy I say, your policy of closure and imposition of collective punishments against the residents of Jerusalem and our places of sanctity will not be tolerated. ”

The Doha-based International Union of Muslim scholars called for all Muslims to show solidarity with worshippers at al-Aqsa in a “day of anger”.

“We call on all Muslims to make this Friday a day of anger against the Zionist actions in Jerusalem and the people residing there,” a statement by the group read.

Earlier this week, Jerusalem’s top Muslim leader called on all the city’s mosques to close on Friday and encourage worshippers to gather outside the gates of al-Aqsa Mosque for the weekly Friday prayers.

Palestinians in the occupied West Bank and Gaza Strip on Friday prayed in public spaces in solidarity with worshippers in Jerusalem.

In Hebron, Palestinians gathered in the Hussein Stadium for Friday prayers.

Reporting from occupied East Jerusalem on Friday, Al Jazeera’s Imran Khan said it was “clear Israeli forces don’t want Muslim worshippers” outside Lion’s Gate, one of the entrances to the Old City.

He said Israeli forces pushed about 100 Palestinians from the road leading to the gate and were only allowing residents to enter the Old City.

The wider al-Aqsa compound is known as al-Haram al-Sharif, or the Noble Sanctuary, by Muslims and the Temple Mount by Jews.

Netanyahu said this week that he does not want to alter the status quo.

But Palestinians fear Israel is trying to retake the site by stealth.

Palestinian President Mahmoud Abbas cut short a trip to China on Wednesday to return to the occupied West Bank to deal with the mounting tensions.

On Wednesday he urged the international community to intervene.

Turkish President Recep Tayyip Erdogan, who had spoken to Abbas by phone earlier in the day, urged his Israeli counterpart Reuven Rivlin to remove the detectors.

“Given the importance that Haram al-Sharif carries for the whole Islamic world, the metal detectors put in place by Israel should be removed in the shortest possible time and an end put to the tension,” Erdogan said.

The site houses al-Aqsa Mosque and the Dome of the Rock shrine, Islam’s third holiest site after Mecca and Medina, as well as the ruins of the Biblical Jewish Temple.

Questions about control of the site frequently lead to outbursts of fighting.