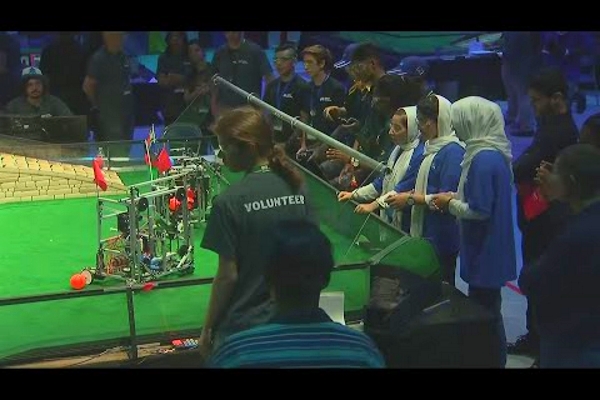 U.S. authorities had originally refused access to schoolchildren from a number of Muslim-majority nations to participate in the science contest, decisions that followed the implementation of stricter visa policies under Trump.

At the urging of Trump, however, U.S. officials reversed policy and allowed the six girls from the Herat region to enter the country for the FIRST Global Challenge — a three-day international robotics competition that aims to promote science and technology among youths worldwide.

When the reversal was announced, Ivanka Trump tweeted: “I look forward to welcoming this brilliant team of Afghan girls, and their competitors, to Washington DC next week!”

The girls arrived in Washington on July 15, where they were greeted at Dulles International Airport by a group of supporters, including Afghan ambassador Hamdullah Mohib and acting special representative for Afghanistan and Pakistan Alice G Wells. The girls were presented with bouquets.

The Afghan girls are entering a robot they made that can recognize blue and orange and sort balls into correct locations.

Critics had argued that the denial of the visas was the wrong message to send to the people of Afghanistan, where U.S.-led forces have been helping to fight Taliban extremists for 16 years.

With additional reporting by AP and AFP.