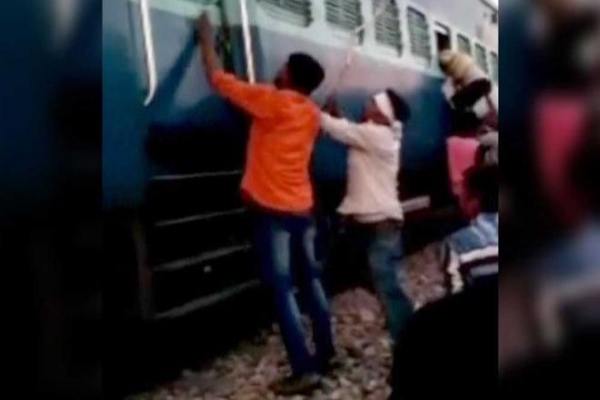 Still from online video of brutal assault of Muslim family on a train in India.

NEW DELHI – A Muslim family was brutally assaulted by a mob in a passenger train in northern Indian state of Uttar Pradesh, one of the victims said.

The incident took place on the Shikohabad-Kasgang passenger train on Wednesday, however, a video of the incident became viral on Friday, after which three men have been arrested by the police.

In the video, a group of around 30 men with rods and sticks could be seen beating the family.

Four of the family members have suffered fractures; almost all of them suffered internal stomach injuries, local media reported.

One of the victims, 50-year-old Mohammad Shakir, told the Times of India his family was targeted after the mob noticed that women in the family were wearing veils.

“They attacked us with iron rods, robbed our belonging and molested our women. They didn’t even spare my 17-year-old physically and mentally challenged son.

They verbally abused us with some in the group saying, ‘Kill them, they are Muslims’ and they continued to beat us until we went unconscious,” he added.

Police have registered a case into the incident.

“We have registered a case and based on the video of the incident, we have formed a team for questioning and arresting those involved in the incident,” superintendent of police Om Prakash Singh told Anadolu Agency.

Last month, a mob stabbed to death 16-year-old Muslim boy Junaid Khan on a train to Mathura from Delhi, accusing him of carrying bags full of beef.

In a similar incident also last month, a 45-year-old Muslim trader was killed by a mob of more than 100 people in Jharkhand’s Ramgarh district on suspicions of carrying beef in his car.

Cows are considered sacred in Hindu religion. After Modi came to power in 2014, many states in the country enacted harsher laws against cow slaughter.